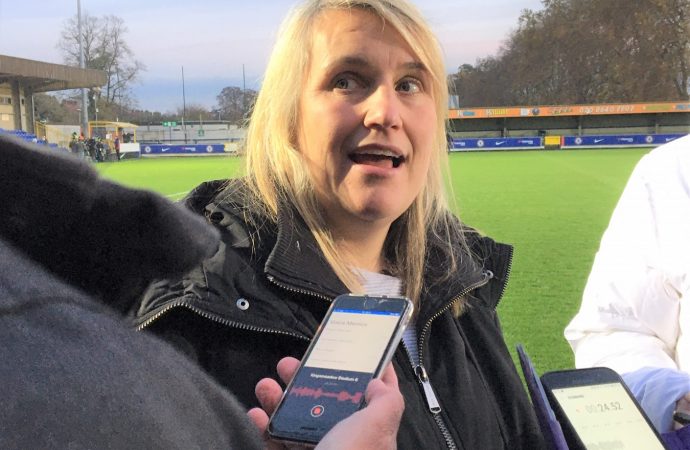 Emma Hayes wasn’t a picture of contentment after the 3-3 draw at Manchester City, but she’s a realist and she knows the critical importance of even a single point as we approach the sharp end of this eventful season. “It was more like a basketball match than a chess match,” she said, shaking her head

Emma Hayes wasn’t a picture of contentment after the 3-3 draw at Manchester City, but she’s a realist and she knows the critical importance of even a single point as we approach the sharp end of this eventful season.

“It was more like a basketball match than a chess match,” she said, shaking her head in the post-game press conference. Pushed to say how this would affect the three-horse race that is the WSL 2019-20, she put it in perspective. “I’ve lost the title in the last game [of the season] before,” she said, bluntly. Nothing is certain, and nothing is likely to be certain until the final matches.

If your team has conceded three goals – whether it’s home or away – there have to be concerns at the back for a manager, and she didn’t shy away from attributing blame to her defence, while also paying tribute to the strength of City’s attack on a pitch which always seems so much wider than compact Kingsmeadow.

Maren Mjelde, usually so firm and resolute in Chelsea Women’s right-back position, was too often overlapped by Lauren Hemp, who at times seemed to have complete authority over City’s left flank. Even when Mjelde got the ball, her distribution was below par, and there’s a question mark over whether Hayes will persist with the 30-year-old Norwegian for the Conti Cup final looming this weekend.

The obvious swap would be to give Hannah Blundell – fast, nippy and intuitive – the right-back role, especially as she’s now had a couple of weeks’ rest and has just signed an extension to her contract at Kingsmeadow.

This springy and popular graduate from the Blues’ centre of excellence has added two years to her deal with the club, meaning she’ll still be a player with Chelsea in 2022 – having made her debut in 2013, notching up more than 150 appearances in that time.

Hayes is reluctant to be overly critical of Mjelde (who has been a reliable servant to the club), but she also doesn’t want to give Arsenal added hope down their left wing on Saturday at Nottingham, and is now weighing up her options.

Jonna Andersson had a better game on Chelsea’s left at City’s Academy stadium, and the central pairing of Millie Bright and Magda Eriksson stood firm against what was – to be fair – the toughest attack and midfield that the Blues have faced in the past year.

And what, overall, of this memorable 3-3 draw? It isn’t often that football lives up to the hype, but this match eclipsed the pre-match ballyhoo.

A sumptuous treat for the 3,542 in the Academy stadium, and the best possible TV advert for the women’s game, it was the perfect aperitif to the Conti Cup final.

Yet it means that Chelsea manager Emma Hayes has still not won a league game at the Academy stadium, even if she did come a whisker away as the two best teams in the land slugged it out.

Chelsea’s Beth England and City’s Ellen White are strikers at the top of their game, and England gaffer Phil Neville – wrapped up warm against the icy side wind – was suitably impressed.

It leaves the title race too close to call, with Arsenal very much in the mix.

Ann-Katrin Berger earned a special hug from Hayes at the end, after she stopped Georgia Stanway’s 70th-minute penalty with the scores level at 2-2, the earlier goals being crackers from Ji So-Yun and Stanway on top of efforts from White and the Blues captain Magda Eriksson.

But the best was still to come. On 75 minutes, England unleashed a 27-yard stunner which billowed the net as goalie Ellie Roebuck clawed at air.

Then, a minute later, Lauren Hemp took advantage of a moment’s indecision by defender Mjelde and slotted home the leveller.

Hayes described the end-to-end spectacle, where wind-battered high balls were another factor for both teams to deal with, as more like basketball than the chess game many had predicted.

This was joyous, boisterous, untrammelled, free-flowing fun from start to finish, and if the weekend’s Women’s League Cup final is half as good, it’ll be a treat.