It could get wurst for Chelsea 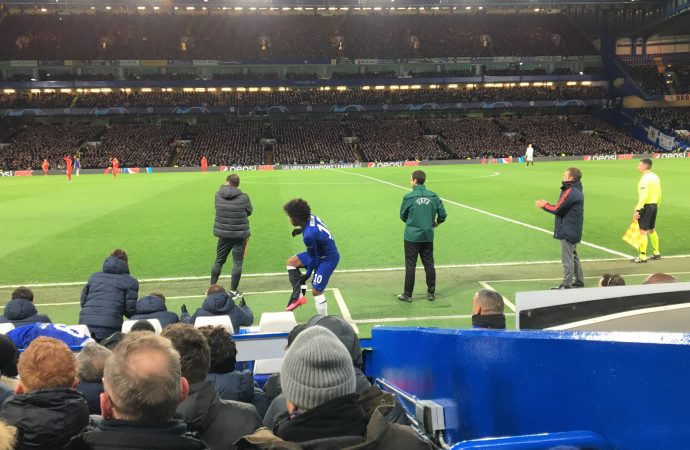 Chelsea managed to escape with a 3-0 defeat at the Bridge against a potentially rampant Bayern Munich side who are going to take some stopping if they aren’t going to lift the Champions League trophy this season. For all the Blues’ endeavour (and there were odd glimpses of promise, with Mason Mount having a good

Chelsea managed to escape with a 3-0 defeat at the Bridge against a potentially rampant Bayern Munich side who are going to take some stopping if they aren’t going to lift the Champions League trophy this season.

For all the Blues’ endeavour (and there were odd glimpses of promise, with Mason Mount having a good game, Mateo Kovacic industrious in midfield and Tony Rudiger also impressing) this was a one-sided contest as Chelsea again failed to convert chances, and proved vulnerable on the break.

And what a break! With sprinter Alphonso Davies rocketing down the left flank like a Porsche on an autobahn, and striker Robert Lewandowski morphing into a selfless provider, Serge Gnabry scored two identical goals in the space of three minutes to kill off this game, and probably the tie, on a chilly night at the Bridge.

Lewandowski got his just reward for the assists in the 76th minute as he converted Davies’ cross to make it three priceless away goals without reply.

To say Chelsea have it all to do in three weeks is an understatement. Things, you feel, may only get wurst.

The added complication is that Marcos Alonso was given a red card – not by French ref Clement Turpin (nor, by the way, by his highwayman brother Dick), but by the dreaded VAR.

Ahead of the game, the big screens at Stamford Bridge had relayed a jolly UEFA explanatory (and rather condescending) cartoon explaining in English and German how and when VAR would intervene. It was greeted by a disparaging chant that left few people in any doubt as to fans’ opinion of the video review system as it stands.

So when the video ref instructed the on-field ref to review the yellow card he had just shown to Alonso, Monsieur Turpin galloped to the side of the pitch, then upped the card to red and sent off the Chelsea left-winger with eight minutes of the match remaining for a tackle on Lewandowski.

A string of late substitutions including Willian (pictured above, about to come on) and Tammy Abraham (for Olivier Giroud, who again started ahead of him) failed to make a difference; chances just weren’t created or taken.

It seems difficult to envisage the Blues coming back from this heavy home defeat. But at least Chelsea can comfort themselves it wasn’t as bad as Bayern’s rampage at Spurs’ home in October, and that infamous 7-2 defeat of Tottenham (another game when Gnabry was on target).

Jorginho picked up a second yellow for berating the ref, and will – like Alonso – miss the return leg in Munich on March 18.

So Blues fans had to content themselves with sung reminders of the famous Champions League win in 2012 against Bayern at their own home ground; chants rebuffed with sarcastic choruses of ‘Football’s coming home’. And as home fans began drifting out with minutes remaining on the clock, the Auf Weidersehens began to ring out.

It was, admitted Lampard afterwards, a poor performance. “They outclassed us in every department, and it’s quite sobering,” he said. “I’m disappointed we couldn’t do more against them. We have to take it on the chin.”

It was Chelsea’s heaviest home defeat in European competition, and it was against a side who were simply unbeatable on the night. How the Blues could use an Alphonso Davies. 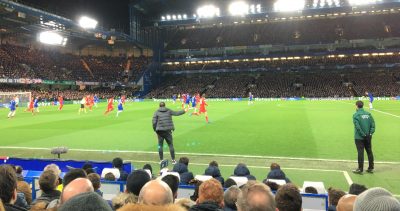