U18s are through to semi 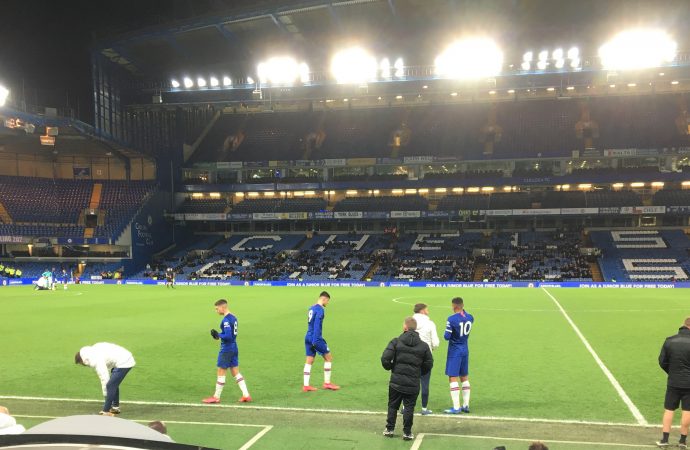 The Blues’ next generation have won through to the semi-finals of the FA Youth Cup – a trophy that Chelsea have largely made their own in recent years, notching up seven trophies in a decade – with a ground-out 1-0 victory over Millwall in front of boisterous (and numerous) support for the south Londoners. On

The Blues’ next generation have won through to the semi-finals of the FA Youth Cup – a trophy that Chelsea have largely made their own in recent years, notching up seven trophies in a decade – with a ground-out 1-0 victory over Millwall in front of boisterous (and numerous) support for the south Londoners.

On a chilly night at Stamford Bridge, striker Armando Broja – one of the men of the match – scored the all-important goal in a game Chelsea’s youth dominated, but couldn’t fully control.

Chances were created, but not converted – a similar problem to the one afflicting the men’s first team. But, in the end, the Blues saw the match out without the need for extra time or penalties, and will now face either Wigan or Man U in the semis.

It was a chance to run the rule over potential recruits of the future, in an era where Blues first team manager Frank Lampard appears more likely to promote from within than some past gaffers who simply want to buy in off-the-shelf overseas talent.

So who impressed? The actual man of the match was, in The Good Life’s humble opinion, Marcel Lewis – the nippy, mercurial No11, who has a knack of eluding tackles and carving out opportunities.

Others who caught the eye included striker Broja; a determined, unrelenting forward – a good target man with a real focus on his task. Dynel Simeu shone in defence – an imposing, authoritative figure with a creative coloured hairstyle that seemed to get the vocal Millwall supporters going.

Another to watch, in defence, is the uber-cool right-back Henry Lawrence, who showed anticipation and a lightning turn of speed to originate attacks from the back line, while captain and forward Faustino Anjorin has a great footballing career ahead of him; a big, strong presence.

Although most of Chelsea’s shots flew over the bar (some threatening to fly over the stands), at least it was a series of chances created. Millwall, by contrast, struggled to penetrate the Blues’ defensive line, and Chelsea keeper Jake Askew was rarely called upon to do anything all match.

After 19 minutes Chelsea thought they had the breakthrough from Broja, but his ambitious bicycle kick not only connected with the ball and sent it rocketing into the net, but also connected with Millwall defender Ben Bennett, who was stretchered off. So ref Tom Reeves ruled it out.

However, Broja’s second-half goal did count. Lewis sent a free kick into the area, Broja cleverly controlled it and killed it dead at his feet, then poked it past Leighton Fanshawe in the Lions’ goal.

Ed Brand’s side now wait to see whether Wigan or Manchester United will be facing them in the semi-final. They play on Friday night at Old Trafford – with entry free.

Millwall brought 900 fans to Stamford Bridge and filled much of the lower Shed, eclipsing the Chelsea support (oddly sited in the west stand) and outsinging them for most of the game.

One concern for Chelsea was an injury to Levi Colwill who – like Bennett in the first half – was taken off on a stretcher, to be replaced by the fleet-footed Dion Rankine.

The only other moment of tension was in the 25th minute, when the floodlights flashed and flickered alarmingly, and the big screens at Stamford Bridge shut down for 20 minutes. “We are Millwall; we’ll play in the dark,” sang the away fans.