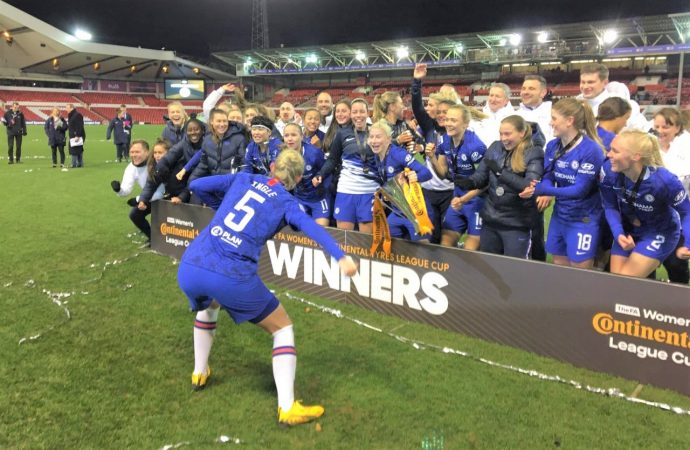 Sophie Ingle led the Chelsea Women’s team in fist-pumping whoops of delight on the field as they celebrated squeaking to victory in the League Cup just as opponents Arsenal seemed to have done enough to push an exciting final into extra time. The Reds had all the second-half momentum at Nottingham Forest’s City Ground on

Sophie Ingle led the Chelsea Women’s team in fist-pumping whoops of delight on the field as they celebrated squeaking to victory in the League Cup just as opponents Arsenal seemed to have done enough to push an exciting final into extra time.

The Reds had all the second-half momentum at Nottingham Forest’s City Ground on Saturday evening, having regrouped at the interval after falling behind in the eighth minute of this gripping end-to-end contest between the two London sides.

Left-back Jonna Andersson and midfielder Ji So-Yun exchanged passes before Andersson found the space to send a long looping cross to the far post, where right-back Maren Mjelde was waiting.

It looked to have gone too long, but Mjelde’s ponytail swished in the air as she hurled herself at the lob and nodded back into Arsenal’s six-yard box. For a brief moment time stood still as Beth England scuffed a shot and the ball sat tantalisingly unguarded in the danger zone.

Both England and her fellow forward Sam Kerr stepped towards it as Arsenal’s defence reacted… but England was hungriest, and as both she and Kerr shaped to shoot, whammed the ball into the net.

For the next 75 minutes, Chelsea clung to that lead, weathering assault after assault by the north Londoners who, as Chelsea manager Emma Hayes put it in the build up to the cup final, saw the silverware it as “their trophy”, having won it five times out of the eight it had previously been contested.

Time after time, keeper Ann-Katrin Berger batted away shots, intercepted attacks and bravely threw herself in the way of scoring chances as the red tide turned.

But every Arsenal attack was followed by a Chelsea counter. As the 30-minute mark neared, Louise Quinn came a whisker away with a header, followed half a minute later by an England header at the opposite end… probably the clearest chance the striker had all match, but one that just went wide.

Ref Helen Conley blew for the break, and the temperature began to really plunge with the icy tail of Storm Jorge whistling through gaps in the City Ground. England – like Ji, Kerr and Guro Reiten – wore gloves as the Blues opted to try to nurse that 1-0 lead through the second half.

Chelsea rode their luck for most of the 45 minutes, but it looked only a matter of time as to when Arsenal (only able to name five subs to Chelsea’s seven because of injuries) would level.

On 82 minutes the trainers came on to treat Berger in the Blues’ goal after she had taken the full force of a Miedema piledriver in her midriff, winding her and nearly lifting her off her feet.

With sub Carly Telford warming up on the touchline, Berger decided to stay on… and the next moment Arsenal had equalised. There were just five minutes remaining on the clock when Leah Williamson’s header was blocked, but she reacted quickly and fired home the loose ball for 1-1; a slight deflection off Blues captain Magda Eriksson’s leg wrong-footing the helpless Berger.

The pendulum had swung Arsenal’s way as extra time loomed. Fourth official Stacey Pearson held up the board for five additional minutes, and you’d have bet good money on a further half hour of hostilities.

Had that happened, despite Arsenal’s denuded bench, the momentum was with the Reds, and Chelsea – determined, but ragged – would probably have been unable to prevent the north London club notching up a sixth title.

But Chelsea rallied and, perhaps knowing it was now or never, threw everything into another assault. Kerr made it, and deserves most of the praise for her gutsy determination in carving out the crucial chance. She had galloped down the right wing, outpacing Viktoria Schnaderbeck before twisting inside to leave the defender sitting on her Arsenal.

Glancing up, Kerr spotted the onrushing Mjelde in a good position, jabbed the ball back to her, and the right-back fired through keeper Manuela Zinsberger’s legs and across the Gunners’ goal to give England, who had run from deep, a tap-in at the far post.

At 2-1, with just a couple of minutes of stoppage time left, Arsenal were deflated and defeated. Kerr was taken off and replaced by Drew Spence, to eat up a little more time, then the final whistle blew.

“They had three chances, and scored two goals,” said Arsenal manager Joe Montemurro, adding that his team “will keep fighting”. He continued: “This team does not give up; you saw that today.”

Perhaps the only real disappointment of the cup final was the crowd. Just 6,743 were present on an admittedly bitterly cold day for the first trophy of the season.

Set-piece finals have to be allocated to a ground early on in any season – and often a year or more in advance – hence Nottingham’s choice. But had the FA Women’s Continental League Cup – to give it its full name – been staged in London, it would have attracted five or six times the attendance.

Emma Hayes graciously conceded that Arsenal had, technically, been the better side for much of the game, but that Chelsea had won through in the resilience department.

Both Montemurro and Hayes agreed that Berger’s goalkeeping contribution had been pivotal. “She may have been the difference today,” said the Australian.

Hayes summed it up. “We knew this would be a dominant Arsenal performance, which shows what a great team we are!” She said that the level of Chelsea support (far outnumbering the Arsenal crowd) made it feel like a home match for the Blues.

The pride in her team and her squad and her backroom staff and coaching assistants was clear as she cradled her son Harry while being interviewed after the final whistle by the BBC’s Clare Balding, and stressed just how much this was a collective achievement.

But as the only manager in women’s football to have won the league, FA Cup, League Cup and the Spring Series (the bridging tournament in 2017 which realigned the WSL to the men’s season, and which the Blues won on goal difference from Man City), Emma Hayes deserves huge plaudits. 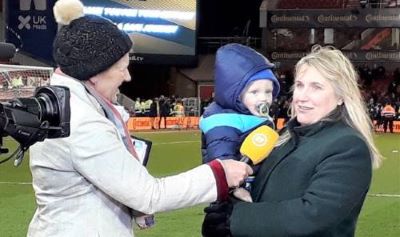