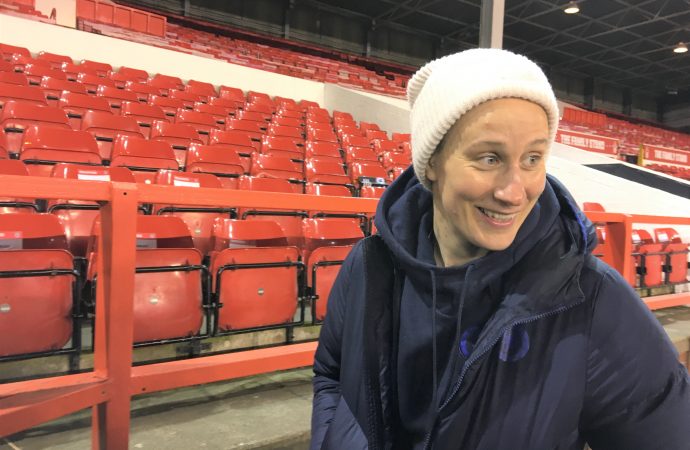 In her cable-knit beany hat, cagoule and double tracksuit bottoms, Chelsea Women’s goalie Ann-Katrin Berger shivered in the cold and modestly deflected the praise away from her and towards her defence as she was acclaimed the heroine of the hour for enabling the Blues to lift the Conti Cup. “Everyone is praising what I did

In her cable-knit beany hat, cagoule and double tracksuit bottoms, Chelsea Women’s goalie Ann-Katrin Berger shivered in the cold and modestly deflected the praise away from her and towards her defence as she was acclaimed the heroine of the hour for enabling the Blues to lift the Conti Cup.

“Everyone is praising what I did on the pitch, but I think my defenders were incredible,” said the German shot-stopper after the weekend’s 2-1 win against Arsenal at Forest’s City Ground in Nottingham.

“It’s completely a team effort, what we did today,” added the 29-year-old, confirming that the FA Women’s Continental League Cup was the first piece of professional silverware she had ever won. “It’s my first trophy! I’ve come second a couple of times, but this is the first [cup], and I’m really, really happy about it. It feels great, and now I want more!”

It was Berger’s courageous block of Vivianne Midema’s hard-hit shot in the 82nd minute of the Conti Cup final that was the stand-out moment for the keeper as Chelsea clung on to the eighth-minute goal scored by Beth England.

“I just saw that she was alone, and I just jumped into the ball and tried to make myself big,” she said. “And it worked. It was a good save, but there were many other saves that were better.”

The trainers had to rush on to treat the prone goalie for a couple of minutes afterwards as she was winded by the force of the shot, but after she was back on her feet, Berger was unable to prevent Leah Williamson equalising with six minutes of normal time remaining.

Nevertheless, one last heave saw the Blues score a last-gasp clincher through England, and gave the club the only domestic trophy missing from the cabinet.

Berger herself said that having the support of Chelsea’s other top-class keeper Carly Telford meant everything, and was one of the reasons why she’d opted to join Chelsea from Birmingham City. “Carly, for me, is a world-class goalkeeper, and I learn a lot from her. She pushes me to a new level.”

She said that her crucial penalty save the previous week against Manchester City had given her fresh impetus coming into the League Cup final.

Asked if it had always been the manager’s intention to select her for the final instead of Telford, Berger said: “It was a last-minute decision by Emma, but I’m happy to have played in the final and to finally win something!”

She said that winning the treble – League Cup, FA Cup and WSL – was now firmly in the minds of the players. “Definitely! We’ve won the first cup, and now we want more. All eyes are now on the FA Cup and the league; why not?”

Berger added that as long as Saturday’s cup final went on, the more she was convinced Chelsea would win. “It’s why I chose this club,” she said. “I always had the feeling it would be Chelsea’s day. We were really ruthless in the final; that’s been the case for many years now. Even though Arsenal were really good, kept possession and really pushed us, I never had any doubt [we would win].

“We were always up for a last-minute win, and I just tried to keep us in the game. The team did the rest.”

Berger, who was a losing finalist in the tournament when she was at Birmingham, said: “Chelsea had never won this trophy, so now is a good time to do it.

“This season is all about winning. We want to win everything, so we have to start with the Conti Cup.”

Asked about Beth England’s form, scoring both the opener and the winner in the final, Berger said that training alongside the likes of England, Sam Kerr, Erin Cuthbert, Fran Kirby, Guro Reiten, Drew Spence, Ramona Bachmann, Adelina Engman and Ji So-Yun meant she was well prepared to face any opposition striker.

“I’m happy with all our strikers; they make me better. Every time I’m on a pitch I want to prove myself against the best strikers, and Sam and Beth are among them. Adelina is just back from injury, even Erin, Guro and Fran when she’s coming back… all these players make me a better goalkeeper. I say thanks to them for making me better.”