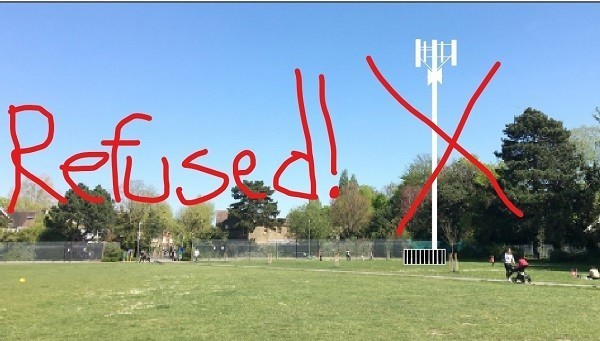 Plans by telecoms giant EE to site an 82ft (25m) mobile phone mast in a fenced-off area of Victoria recreation ground have been refused by the council after a tidal wave of complaints. More than 250 objections were sent to Kingston Council’s planning department after the proposal was lodged days after lockdown began, with no

Plans by telecoms giant EE to site an 82ft (25m) mobile phone mast in a fenced-off area of Victoria recreation ground have been refused by the council after a tidal wave of complaints.

More than 250 objections were sent to Kingston Council’s planning department after the proposal was lodged days after lockdown began, with no committees sitting.

In a strongly worded letter to EE’s agents the Harlequin Group, planners not only rejected the mast as being an incongruous addition in its siting and appearance to the 130-year-old rec in Balaclava Road, Surbiton, but also accused EE of telling porkies.

The mobile phone company had claimed that pre-application discussions with planning officers and ward councillors had taken place.

Balderdash, said Kingston Council. No such discussions had been held.

“The proposed telecoms equipment by virtue of its siting and appearance would create an incongruous addition to the park that would be visually intrusive and create visual blight and clutter and detract from the character and appearance of the Victoria Recreation Ground and the surrounding area,” said Barry John Lomax, head of Development Management for Kingston Council.

The mast, primarily for the benefit of rail-users, would have been the height of two double-decker buses standing on end – higher than the park’s tallest trees – and would have been housed in a 26ft x 20ft (8m x 6m) compound surrounded by a metal fence – taking up a big chunk of the well-used and much-loved park.

“We’re over the moon,” said Friends of Victoria Rec campaigner Helen Swinburn, a group set up to fight the phone mast but which now plans to maintain and improve the park. “There has been a huge amount of opposition to it. We are delighted that our park has been saved and that the council came down on our side. We are also delighted that all three of the local ward councillors strongly objected to it as did the councillors in Long Ditton too.

”The mast would have really deterred people from using the park – and would have taken up a huge chunk of it. It would have been a real blight on the recreation ground.”

Helen said there was support in Surbiton for better connectivity, especially now people were working from home.

“I accept that phone masts are a fact of modern life and I am not opposed to them in general but they should not be located in parks. I feel our green spaces should be protected and would love to see RBK adopt a no masts in parks policy.”

Helen said the Friends group was mindful that EE might appeal the decision but said they were much better organised now to fight an appeal should one take place.