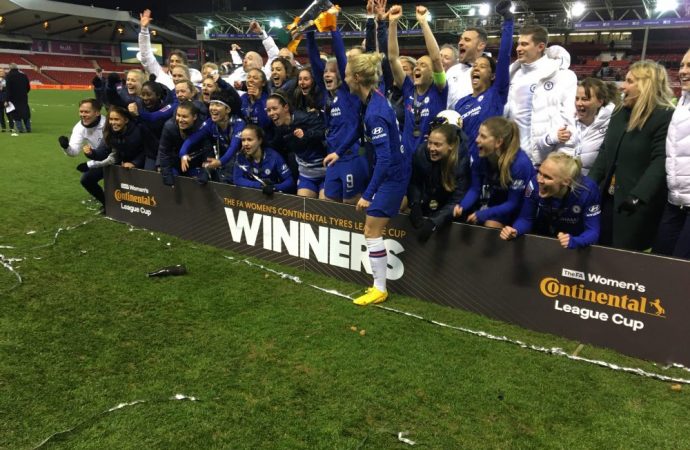 Chelsea Women have been declared Super League champions! The Football Association Board, by a majority vote, has ruled to award the 2019/20 Barclays FA Women’s Super League title to the Blues – who play at Kingsmeadow, Kingston. Better still, it means Chelsea FC Women (as well as Manchester City Women FC) will qualify for the

The Football Association Board, by a majority vote, has ruled to award the 2019/20 Barclays FA Women’s Super League title to the Blues – who play at Kingsmeadow, Kingston.

Better still, it means Chelsea FC Women (as well as Manchester City Women FC) will qualify for the 2020/21 UEFA Women’s Champions League. It’s a big blow to Arsenal Women who could still have overtaken both City and Chelsea if results in the abandoned 2019/20 season had gone their way.

The Blues were in second place in the table, behind City, but with a game in hand. But Chelsea were unbeaten in the WSL – a key factor in reaching the decision to award the club the title.

The final team positions across both leagues also confirmed that Aston Villa Women will be promoted to the Women’s Super League season, and Liverpool FC Women will be relegated to the FA Women’s Championship. As the 2019/20 results were expunged between Tier 3 to Tier 7 of the women’s pyramid, there will be no relegation or promotion between the FA Women’s Championship and Tier 3 this season.

All decisions were made and finalised by the FA Board, and were based “on the most appropriate sporting outcome for the 2019/20 season”. The FA Board says it considered and analysed all of the recommendations made to them by the FA Women’s Super League & FA Women’s Championship Board, which were collated after full and thorough consultation process with the clubs.

Kelly Simmons, FA Director of the Women’s Professional Game, thanked the clubs for their help, and congratulated Chelsea. “It’s been a hard-fought campaign, and their success is well-deserved, with the outcome based on sporting merit,” she said.

Now the FA is working on planning next season’s fixtures.

While Chelsea Women won the Conti Cup – the League Cup – there is still debate about how to sort out the final stages of the Women’s FA Cup. A decision on what has been decided will be announced at the end of June.

But why, with the Premier League and Championship due to start in a few weeks, was the women’s top-flight league so swiftly abandoned? “The answer is a simple one,” insisted Kelly. “Once the government published the protocols to return to training, we consulted with the clubs and looked at every possible way to complete the season.

“Following consultation with the clubs, and separately with all of the club captains, the clear consensus was that there were too many operational, logistical and financial obstacles in place to complete the season – and that the overwhelming view was to prepare for and concentrate on coming back even stronger for the 2020/21 season.”

She remains upbeat. “There is so much to be positive about. We have some of the best players in the world gracing our league, and we are soon to open bidding for domestic broadcast rights – and we expect this to be a highly competitive process, which will help the league grow both audience and revenue in the future.”