St Matthew’s bells are back! 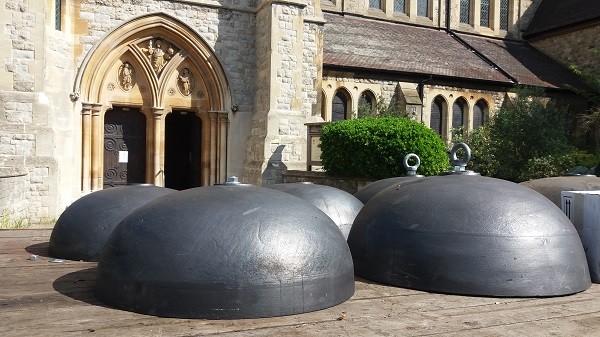 Hallelujah! The bells are back! After more than a year away being cleaned, restored and tuned at a foundry in Loughborough, the 145-year-old Ellacombe chimes (the hemispherical spheres seen in this picture) and a 56st, 286-year-old service bell were returned to St Matthew’s Church yesterday (Monday). Essential repair work on the tower and spire and

Hallelujah! The bells are back! After more than a year away being cleaned, restored and tuned at a foundry in Loughborough, the 145-year-old Ellacombe chimes (the hemispherical spheres seen in this picture) and a 56st, 286-year-old service bell were returned to St Matthew’s Church yesterday (Monday).

Essential repair work on the tower and spire and COVID-19 put paid to their earlier return. Now they look as clean as a new pin!

Music director Simon Hancock can’t wait for the day when they can ring out again to welcome parishoners back to the church in St Matthew’s Avenue, Surbiton.

“We’re delighted to have the bells back at long last, even if we’re not quite sure at the moment when we’ll be able to ring them!” said Simon who was ready and waiting for the truck to arrive carrying its valuable cargo from Taylor’s Bell Foundry. “We’ve had lots of comments from neighbours living near the church who have said how much they’ve missed hearing them.

“This is the first time they’ve ever left the tower, so having them come back really is a once-in-a-lifetime event.”

Simon said the Ellacombe chime arrangement, which allows just one person to ring eight bells, was once quite common but a working set like St Matthew’s is now a rarity.

The bells were removed at the end of March last year and were due to be returned in November, but construction delays to the tower and spire meant that the re-installation had to be re-scheduled to the end of March – then the lockdown happened.

In total they have now been away for 14 months.

The eight hemispherical chimes and the 1734 service bell (over a century older than the church itself) have been thoroughly cleaned by sand-blasting. They have been retuned and repaired and all the ringing mechanisms have been refurbished so that they work smoothly and efficiently.

The heavy wooden ‘deadstock’ which supported the service bell had a serious crack in it and has been replaced.

The total cost of the refurbishment was £42,000 but was done as part of the larger tower restoration project. The bells had not had any serious maintenance since 1985.

The re-installation will take a week, if no snags are encountered, so hopefully they should all be up by Friday (June 12).

“We’re really excited that we’ll soon be able to hear them again,” said Simon who hoped the bells would be able to be rung before Sunday services started up again, which may still be some way off.

As well as maintenance to the bells, the wooden staircases inside the church tower have been reinforced and safety rails added to make them feel much safer for those who aren’t keen on heights, while the area has been spruced up and netting added to keep the pigeons out.

“Part of the project plan is to install CCTV cameras so that people at ground level can watch the bells being rung without having to make the ascent into the tower,” explained Simon. “This was very much encouraged by the National Lottery Heritage Fund, who provided a substantial grant towards the project costs, as a way of increasing the numbers of people who can access the tower, albeit virtually!”