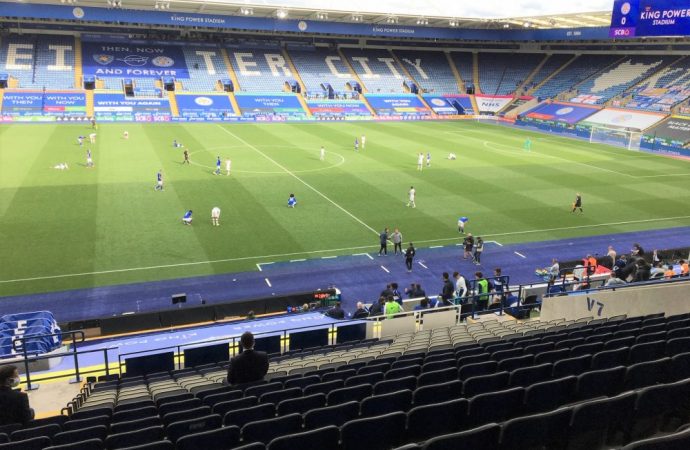 The Leicester players sank to the ground at the final whistle as Chelsea’s players celebrated. After bossing the first half of this absorbing FA Cup quarter-final, Brendan Rodgers had been outfoxed by the young tactician Frank Lampard. Chelsea left Leicester’s King Power stadium 1-0 winners, thanks to a well-worked goal by Ross Barkley in the

The Leicester players sank to the ground at the final whistle as Chelsea’s players celebrated. After bossing the first half of this absorbing FA Cup quarter-final, Brendan Rodgers had been outfoxed by the young tactician Frank Lampard.

Chelsea left Leicester’s King Power stadium 1-0 winners, thanks to a well-worked goal by Ross Barkley in the 64th minute, and will face Man United in the semi-finals.

Barkley had been one of Lampard’s three substitutions, made en bloc at the start of the second half. And it was that switch that finally unlocked the route to the semis.

From the off, Leicester looked in charge, making endless upfield forays, playing a high line and catching the Blues flat-footed in the echoey space of the King Power – so quiet at times that you could actually hear player conversations taking place on the opposite side of the pitch.

Jamie Vardy threatened several times, and Ben Chilwell – the left back coveted by Lampard – also looked sharp. At times the Blues were clinging on. They looked a man short, they were hassled and harried at every step and it took an age to get a grip of possession and start mounting attacks.

“We spoke at half-time,” said Lampard afterwards (though, in truth, there were also plenty of words exchanged during the drinks break midway through the first 45 minutes.

As a cold wind swirled round the empty stadium, it was Chelsea feeling the chill. Then everything changed.

“The first half  was not what we’re used to in terms of performance,” said the manager. “We lacked intensity; I could have made more subs for more urgency. It was lethargic.”

Withdrawing Mason Mount, Billy Gilmour and Reece James was a harsh verdict on the midfield’s inability to control the game… but a fair one. Ross Barkley, Mateo Kovacic and Cesar Azpilicueta took command, and Chelsea never looked back.

The only problem Kasper Schmeichel had in a one-way first half had been a close-range rocket from Christian Pulisic, which the Foxes’ captain tipped over the bar.

But in the second half, he was besieged.

The warning came on 56 minutes when Tammy Abraham put the ball in the net, only to be ruled offside. Eight minutes later, Willian – the Chelsea captain on the day – scooped the ball into the area and Barkley swept it home after nipping ahead of Jonny Evans.

With Chelsea dominating midfield, it was then just a case of nursing the game to a final whistle and avoiding punishing extra time. There were one or two scares, but nothing truly taxing for Willy Caballero, enjoying a match in goal.

Barkley enjoyed a fulsome tribute from Lamps at the end, and he richly deserved it. You couldn’t keep him off the ball.

Perhaps Lampard’s own team selection was wrong, but his point was to make use of the squad as the games come thick and fast. “The individuals that came on had nice impacts,” he said. “And that’s happened in a few games now.”

He said that the idea was to limit the risk of injuries, and he refused to criticise either Mount, James or Gilmour – players he said had a great future at the club.

Nevertheless, this was a match won by making major changes to the team. Rodgers’ response was a scattering of substitutions of his own, but by then the damage had been done.