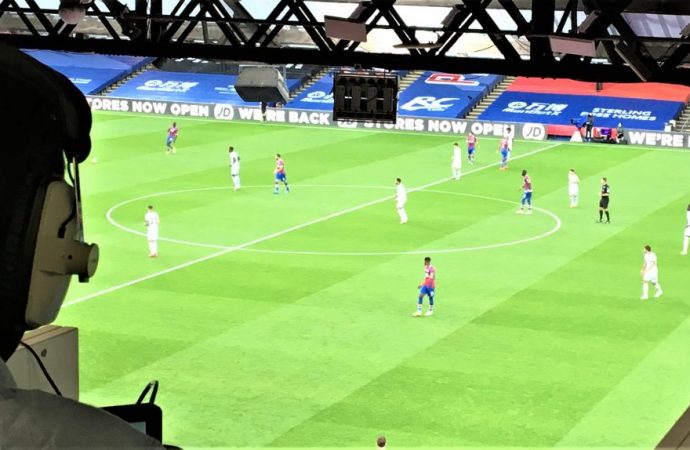 In one of the most absorbing, free-flowing and unpredictable matches of this fractured season, Crystal Palace pushed Chelsea all the way… but just couldn’t pip the Blues at the post in an all-action Tuesday evening thriller at Selhurst Park. Playing in pale blue pyjamas which looked like old Coventry City shirts that had done too

In one of the most absorbing, free-flowing and unpredictable matches of this fractured season, Crystal Palace pushed Chelsea all the way… but just couldn’t pip the Blues at the post in an all-action Tuesday evening thriller at Selhurst Park.

Playing in pale blue pyjamas which looked like old Coventry City shirts that had done too many cycles in a washing machine, Chelsea secured a 3-2 victory against their London rivals to inch up to third in the table.

This was really another men-against-boys saga, as the Blues’ junior prospects lined up against an Eagles team who averaged more than 30. And the action pulsated from the moment ref David Coote blew for kick-off.

Former Chelsea stalwart Gary Cahill suddenly pulled up with a hamstring injury after five minutes as he chased man-of-the-match Willian (who, incredibly, the Stamford Bridge board are still haggling with over a contract renewal). It let the Brazilian steam into the area to set up Olivier Giroud for a simple opener.

There were some half-hearted protests from Palace, claiming Chelsea should have stopped the game, but as Willian didn’t even see his former team-mate fall to the ground, they amounted to very little.

After 27 minutes, the Blues were 2-0 ahead, and apparently cruising. Christian Pulisic – a joy to watch as he weaves through defences like Charlie Cooke in his pomp – was ready and waiting on the left as Willian teed him up. He jinked the ball sideways to fox Joel Ward, then unleashed a beauty into the net… the Blues’ 35th away goal of an eventful season.

That should have been that, but the pick of the first-half goals was still to come, seven minutes later. Wilf Zaha capitalised on a Reece James error, giving the ball away. He let loose a rocket from 25 yards which sailed over Kepa’s despairing wave and buried itself in the roof of the Chelsea net for 1-2.

The fun and games continued in the second half as Ruben Loftus-Cheek, on for Ross Barkley, unselfishly fed fellow sub Tammy Abraham, to allow the lofty beanpole to fire a shot past keeper Vincente Guaita and in off the post for 1-3.

That should have settled it in the 71st minute, but less than 60 seconds later Christian Benteke scored his second goal of the season, diverting a Patrick van Aanholt cross into an empty net.

At the end, following a string of other chances, Chelsea were clinging on. Palace sub Andros Townsend fired in a string of crosses to bamboozle the Blues’ defence, and it was all hands on deck to keep them out until Frank Lampard could breathe a huge sigh of relief at the final whistle. A memorable match.

Next up for Chelsea, another away jaunt – this time to Sheffield United at the weekend.