Fire swept through a Long Ditton garden centre overnight, destroying several buildings and leaving the main office as a charred ruin. Flames were spotted rising behind a line of tall conifers at one edge of Hill Park Roses & Plant Centre just before midnight by the intersection of the A3 slip road and Woodstock Lane

Flames were spotted rising behind a line of tall conifers at one edge of Hill Park Roses & Plant Centre just before midnight by the intersection of the A3 slip road and Woodstock Lane North, as this dramatic picture by Anthony Dowd shows.

The nursery and garden centre – right next door to Squire’s – has been trading since 1968. It is still open, but with no electricity and all the electronic payment equipment destroyed, it’s now cash-only.

Ironically, the sign informing customers that the garden centre also stocks barbecue and chiminea fuel, as well as logs and kindling, was untouched by the conflagration. 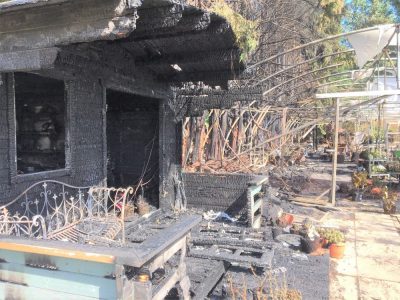 In all, 15 fire appliances from stations across the area tackled the fire through the night after the first call was received alerting the Surrey Fire and Rescue Service to the blaze at 11.43pm on Thursday July 16.

Firefighters managed to restrict the spread of the flames to the garden centre’s office, three shipping containers, a 15-metre line of conifers and one of the nursery’s main growing polytunnels. “We got the first call just before midnight,” The Good Life was told by a firefighter.

Three-quarters of the covered space was saved as firefighters wearing breathing aparatus entered the burning buildings to check if anyone was inside, then controlled and doused the flames. It was a long battle in the dry conditions, with relief fire tenders arriving through the night to relieve crews who were first on the scene.

The last fire engine only pulled out of the Hill Park Roses car park at 9.45am on Friday… nine hours after the first 999 call was received.

The sap-laden conifers alongside the chalet-style main office of the rose nursery burned fiercely, and intensified the heat that spread into the other buildings.

Firefighters removed everything from inside the office – always referred to as The Cabin – and the closest polytunnel, and laid the charred material they retrieved in the field alongside. 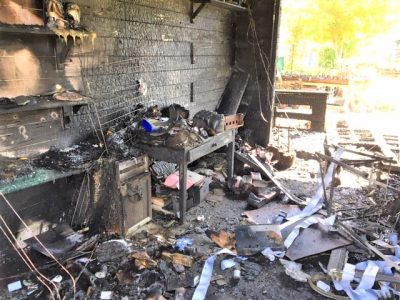 The blaze is not thought to be suspicious, and the fire brigade is not treating the incident as possible arson. “No, it doesn’t seem to be deliberate,” confirmed owner Mike, who said – in a manner of speaking – that ‘sometimes manure just happens’.

The rose specialist nursery, established back when Jim Callaghan was prime minister, focuses on climbers, standards and Old English varieties as well as ground cover plants and patio specimens.

“Fortunately pretty much all our stock was outside, so it wasn’t affected,” said Mike, pictured, surveying the ruins of his former office in the morning. “We’ve lost power and the payment machines, so it’s going to be cash-only.” 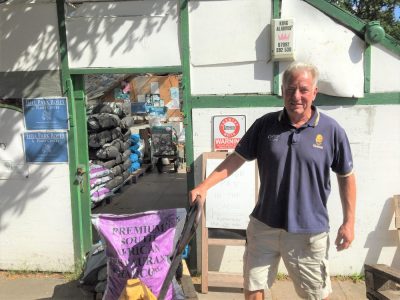 Neighbouring Squire’s garden centre was unaffected by the blaze, but the thick smoke from the fire blew towards Chessington, and caused some alarm among residents there.

Dave Walker, who lives nearly a mile from Hill Park Roses in Hook, said he was able to smell the distinctive wood and pine resin smoke when he went out for his customary early-morning stroll to get the newspaper.

Woodstock Lane North was awash with water from the fire engine hoses as London-bound rush-hour traffic passed the entrance to the garden centre on Friday morning.

Hill Park has – following government urging – been focusing on card payments for goods in recent weeks, although cash is still accepted. 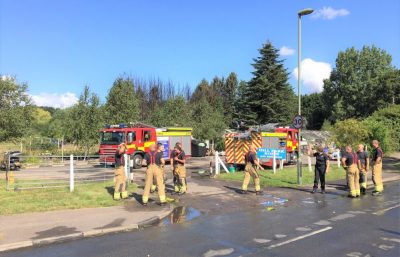 Nursery co-owner Mo caused amusement recently by using a litter-picker to take cash payment from one customer, before rinsing the notes in the sink… leading to joking references to money-laundering.