A nine-goal blitz for Blues 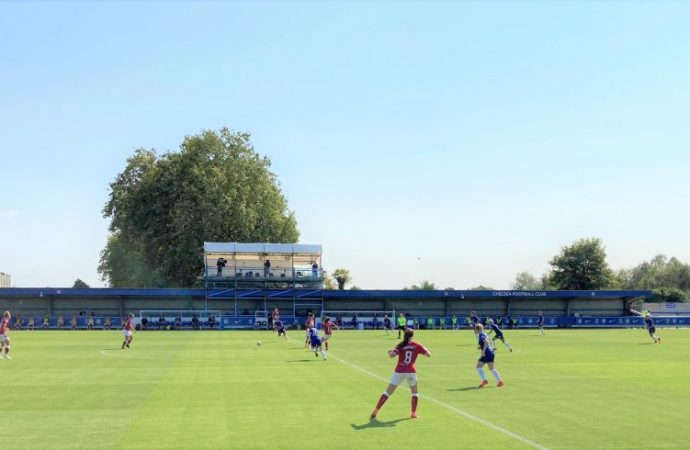 It was not so much a match as an execution. The man trying to keep the score ran out of paper, and the only question was whether Chelsea Women would get into double figures in their first home game of the new WSL season against Bristol City. But it finished 9-0, with almost everyone in

It was not so much a match as an execution. The man trying to keep the score ran out of paper, and the only question was whether Chelsea Women would get into double figures in their first home game of the new WSL season against Bristol City.

But it finished 9-0, with almost everyone in the stadium on the scoresheet. After last weekend’s hesitant draw against Manchester United, this was an emphatic statement of intent.

It took a quarter of an hour for Emma Hayes’ fired-up players to find the first goal – a shot by Fran Kirby which keeper Sophie Baggaley really should have held following excellent assist work from Erin Cuthbert.

But after that, Chelsea were simply camped in City’s half, firing at will, and it was just a case of damage limitation for the overwhelmed visitors.

With fans barred from Kingsmeadow, and forced to watch at home on the BBC Red Button, the stadium was eerily quiet.

But, boy oh boy, does it look smart! Fresh blue paint everywhere, all the tatty Cherry Red Records and Chemflow signs from yesteryear removed, and smart corporate imagery declaring that the stadium is now Chelsea’s; lock, stock and barrel.

With Wimbledon no longer ground-sharing, every surface is royal blue, every sign is Chelsea’s, every banner namechecks squad players.

Chelsea began with a triple attack line of Cuthbert on the left, Beth England in the middle and Sam Kerr on the right, with a midfield of Fran Kirby, Ji So-Yun and Mel Leupolz, and a familiar-looking back line of captain Magda Eriksson and Millie Bright in the centre, with Maren Mjelde and Hannah Blundell on right and left respectively.

In goal, the all-but redundant Ann-Katrin Berger, barking out instructions, praise and constructive criticism the whole match… her words echoing around the deserted stadium. They’re going to have to find something else for her to do on games like this – mowing the grass or being sanitiser monitor. She was a lonely figure, watching the fun from a distance but rarely getting a touch of the ball.

After Ji and Kerr had had a couple of cracks at goal, the newly blonde South Korean was tripped in the area by Yana Daniels, and Mjelde became scorer number two from the spot, firing high and hard into the net just after the half-hour.

It was 3-0 three minutes later, Cuthbert sending a free kick into the area after Blundell had been bundled over near the corner flag… and Leupolz powering a header past the hapless Baggaley; an unstoppable effort.

On 36 minutes Cuthbert got the reward for her assists, firing a 30-yard cracker home for 4-0. Afterwards, Cuthbert told The Good Life that she’d really enjoyed the match, but for one thing. “This sun is no good for my Scottish skin,” she laughed.

And it was a scorcher of an afternoon in every respect. One minute before the interval it had become 5-0. Mjelde lofted a free kick from the right wing, and Millie Bright headed it home – the fifth scorer of the day.

The yogurt-sponsored Bristol City Women did a better containment job in the second half, but normal service resumed on 63 minutes as Kerr’s shot was parried, and England wellyed in the rebound. 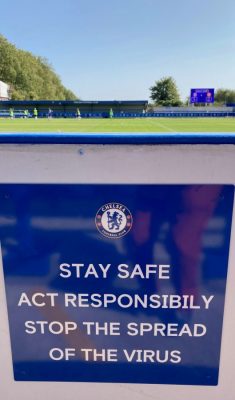 After flurries of substitutions, with Maria Thorisdottir, Naimh Charles and Pernille Harder on (soon to be joined by Drew Spence and Jessie Fleming), Harder saw her 79th-minute effort saved, with Charles slamming in the loose ball on her home debut for 7-0.

It was 8-0 on 74 minutes, with Harder scoring her debut goal as well; Charles supplying the cross as the front line, from left, read: Charles, Kerr, Harder.

The cherry on top was Kerr’s goal – reward for her persistence – with four minutes remaining. She swiched feet, foxed the keeper and shot for a well-deserved netting.

“Wow; what a match,” said Charles afterwards. “It was a great win, and I’m really happy to get my first goal.”

Bristol City were steamrollered, and never managed to generate anything approaching an attack, underlining how this season looks destined to be a three or possibly four-horse race, depending on whether Man U have the depth to compete with Chelsea, City and Arsenal.

Nine goals for the Blues, from nine different scorers, underlines just how strong Chelsea will be. Indeed, those dropped points against United on the opening weekend may well be the only points dropped all season.

The Blues are into their stride, with rich resources on the bench, and it’s hard to see many teams – bar, perhaps, City – threatening their home domination.