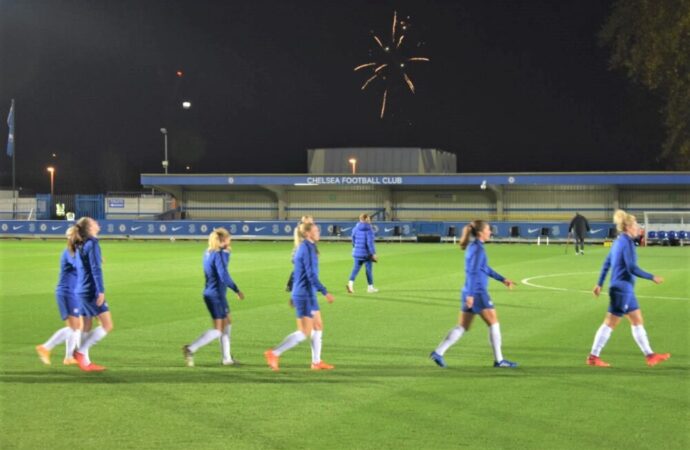 There were fireworks on the pitch as well as overhead at Kingsmeadow on Tuesday night as London rivals Chelsea and Spurs squared up in the Conti Cup. The linos ran their socks off keeping pace with the end-to-end action in this scrappy, gritty contest which saw Blues sub Jessie Fleming yellow-carded in the women’s league

There were fireworks on the pitch as well as overhead at Kingsmeadow on Tuesday night as London rivals Chelsea and Spurs squared up in the Conti Cup.

The linos ran their socks off keeping pace with the end-to-end action in this scrappy, gritty contest which saw Blues sub Jessie Fleming yellow-carded in the women’s league cup Group B derby.

Honours were even until Erin Cuthbert broke the deadlock in the 70th minute with a belter from outside the box. She walloped a stunning strike from fully 25 yards, and while Tottenham keeper Becky Spencer made contact with the ball, she couldn’t keep it out.

Ann-Katrin Berger saved the day for the Blues on numerous occasions with some outstanding goalkeeping, notably a dazzling save from Rosella Ayane, denying Tottenham’s forwards chances to level.

Chelsea’s overwhelming pressure paid off in the end after a handball by Kerys Harrop in the area gave the Blues a penalty. Ref Emily Heaslip pointed to the spot and Mel Leupolz converted in the 83rd minute to clinch the 2-0 victory.

Before the match, Cuthbert had declared that “hard work is the basis of what gets you places”, and both she and her colleagues demonstrated a collective belief in the statement.

Chelsea now move a step forward to regaining the trophy they memorably won up in Nottingham in the days before Covid lockdown.

Barring earthquakes, Emma Hayes’ side should now be through to the quarter-finals, having won their opening Conti Cup game against Arsenal.

Chelsea had begun the game against Spurs as favourites, having won all five of their previous meetings.

The match was live-streamed across several media platforms so fans – again denied entry by Covid rules – were able to follow the action. 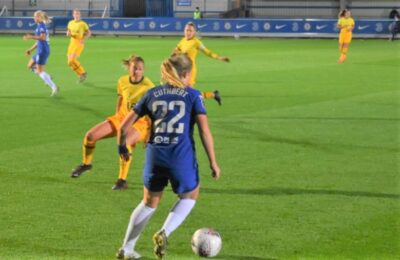 “They deserve to see the quality that we have got in this side,” said Cuthbert, pictured right during the match, who shares the team’s (and club’s) frustration at the current fanless state of affairs.

“Women’s football should always be given a platform, especially when fans aren’t there,” said the 22-year-old.

Hayes was frustrated that forwards Pernille Harder and Sam Kerr (starting as a lone striker in the 4-2-3-1 formation) spurned good chances to put Chelsea ahead, in a match where in-form Fran Kirby was denied a chance to shine by an ankle knock picked up during the international break.

Naimh Charles, also part of the England squad, was given her chance in the starting line-up, which marched on to the chilly Kingsmeadow pitch to a backdrop of fireworks from the nearby recreation ground.

Chelsea are back in WSL action on Sunday when Everton visit Kingsmeadow in a midday match which is live on the BBC Red Button.