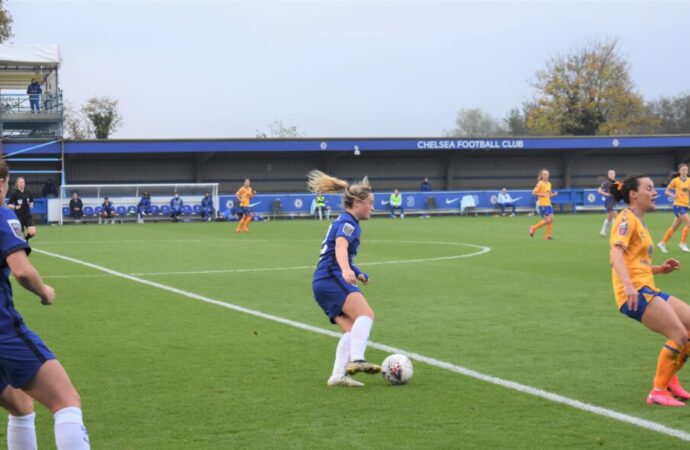 Though not always at their fluent best for spells of this Remembrance Sunday clash, Chelsea Women finished 4-0 winners against Everton at Kingsmeadow with Pernille Harder scoring the pick of the goals… a 25-yard screamer in the seventh minute of stoppage time. Ref Abi Byrne blew for full time as the match restarted, ending an

Though not always at their fluent best for spells of this Remembrance Sunday clash, Chelsea Women finished 4-0 winners against Everton at Kingsmeadow with Pernille Harder scoring the pick of the goals… a 25-yard screamer in the seventh minute of stoppage time.

Ref Abi Byrne blew for full time as the match restarted, ending an absorbing encounter with last week’s FA Cup finalists and cementing the Blues’ position close to the top of the Women’s Super League, with a pivotal clash against Arsenal (surprisingly defeated by Man Utd) looming next weekend.

Manager Emma Hayes was delighted with the teamwork and a result which means that Chelsea have now won six of their last seven WSL encounters with a gritty and much-improved Toffees side, keeping a clean sheet in their past five meetings. “I think we’re starting to find our stride,” said Hayes afterwards.

Everton had been enjoying an impressive start to the new season, with a straight run of five matches unbeaten (their longest streak without defeat since 2012), but Chelsea’s win in the noon kick-off match halted that series, and gave Chelsea their 26th match unbeaten in the WSL – a new club record. 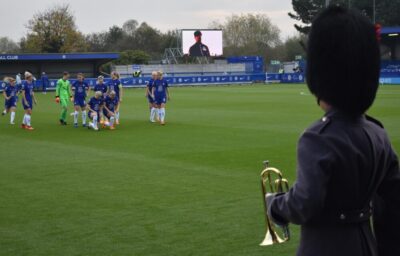 Before kick-off, a bugler played the Last Post as the players respectfully bowed their heads as they stood around two wreaths laid in the centre circle by the respective team captains.

On the stadium’s big screen, pictures of poppies merged with images of the Chelsea Pensioners – as much a symbol of Chelsea Football Club as the official crest. 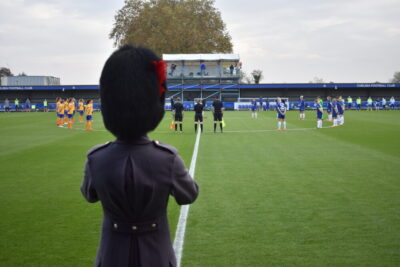 The players wore special-edition poppy shirts, which were later signed and given to the Royal British Legion for auction, 75 years after the end of the Second World War.

The opener came after 16 minutes when Ji So-Yun rifled home from the edge of the area after keeper Sandy MacIver’s attempted clearance had ricocheted back into play off Beth England. The South Korean’s connection was pure and true.

Everton chased the game in the second half, with Ji’s goal still the only difference between the sides in a relentless eddy of attacking and counter-attacking. A clash of heads between England and the Toffees’ Rikke Sevecke led to Sevecke being replaced (aptly) by a poppy… Poppy Pattinson.

But the golden chance for an equaliser came and went in the 68th minute when a long floating cross reached the far post of Ann-Katrin Berger’s goal. Hayley Raso tried to connect from close range, but her attempt was blocked by player-of-the-match Maren Mjelde’s heroic body-on-the-line defending.

Everton manager Willie Kirk put on Chantelle Boye-Hlorkah up front for Simone Magill to try to claw back a goal, but Chelsea suddenly got their act together as Emma Hayes bellowed encouragement from the touchline. At the second time of asking, MacIver managed to hold a fierce shot from Erin Cuthbert (pictured top, on the ball) in the 73rd minute, but seconds later England had made it 2-0 to the Blues, striking home with gusto.

Barely had the game restarted than it was 3-0. After Cuthbert’s shot had been tipped on to the bar by the keeper, England stepped forward again, beating onrushing defenders to dink the loose ball home. And it could have been one of the fastest hat-tricks of all time as England just missed the target moments later with a flying header, only to see her attempt fly wide. 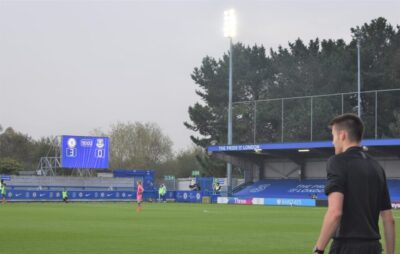 The cherry on top came deep into the long period of stoppage time which the ref added for the earlier clash-of-heads incident.

As the clock ticked to the end of the seven added minutes, Harder unleashed a shot which rose and dipped over MacIver to achieve the 4-0 scoreline.

Chelsea have now notched up 11 WSL home wins on the spin, and haven’t been beaten at home since just before Valentine’s Day 2019.

The Blues are just behind Arsenal, with the all-important clash between the teams taking place at Meadow Park next weekend… and Chelsea still having a game in hand following the postponement of the recent match against Aston Villa after a Covid scare.