Maren? She’s one in a million! 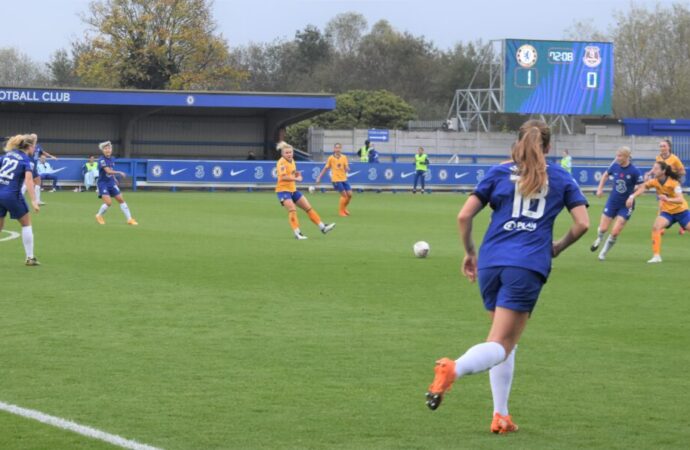 Chelsea defender Maren Mjelde turned 31 last week, making her the oldest outfield player in the first team and, says manager Emma Hayes, one of the most treasured and valued. “She’s one in a million,” is the Blues gaffer’s verdict. The right back, one of the players of the match in Sunday’s 4-0 victory over

Chelsea defender Maren Mjelde turned 31 last week, making her the oldest outfield player in the first team and, says manager Emma Hayes, one of the most treasured and valued. “She’s one in a million,” is the Blues gaffer’s verdict.

The right back, one of the players of the match in Sunday’s 4-0 victory over Everton at Kingsmeadow, is a commanding presence on the right wing; continually focused throughout matches, the most dazzling passer of the ball, a remarkably consistent free kick and corner taker (that’s her below, shooting at the Everton wall) and a confident and dependable penalty taker.

While goalkeeper Carly Telford is, at 33, the most senior player in the Chelsea Women’s squad, Mjelde is the most experienced outfield all-rounder, able to slot in anywhere she’s needed and perfectly at home in midfield as well as at the right (or even centre) of a back four. 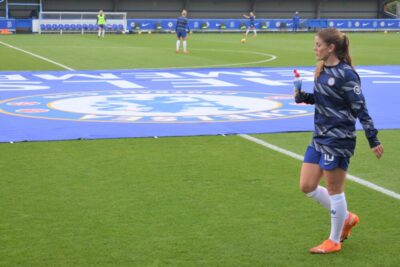 According to Hayes, the Norwegian captain is not merely an inspiration to the younger players in the Chelsea Women’s squad, but to all the players, irrespective of age or experience. And she performs that role with a modesty and calm; speaking softly, but with authority, in the dressing room.

Hayes says it’s all well and good having a squad of world-class players at her disposal, but the key is harnessing the skills and gifts of those players willing to adapt. “Managing top talent is not easy,” said Hayes after the win against Everton, casting her eyes heavenwards as she was asked for the umpteenth time why this player or that player had been consigned to the bench.

But in Mjelde, Hayes knows she has an extra-special gem. “Maren Mjelde is an unbelievable servant to Chelsea Football Club because of everything she gives the team on and off the pitch, and she deserves every accolade and award… she’s one in a million!” 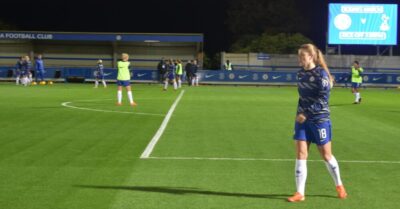 However, Hayes recognises that no player can be consistent for an entire season, and that managing, and recovering from, any small dips in form is crucial. Mjelde was, it must be remembered, one of the team who travelled to Merseyside and was knocked out of the delayed last stages of the FA Cup in September, leaving Chelsea without the Wembley final they’d dreamt about, and denying the club that elusive treble of league, league cup and FA Cup.

“When we played Everton away, Maren had a really poor game. I thought they targeted her. You then have a choice as a player; you either curl up and hide, or you fight harder than you’ve ever done before. And what a human being this is!” said Hayes.

“She acknowledges, quietly, when it’s not right. She quietly goes about her business in a superb way, and her just reward when you play an opponent that you really struggled against last time around was to put in the performance that she put in today.”

When you’re as talented as Mjelde, you find methods to constantly improve to stay at the top of the tree. “World-class talent finds new ways; world-class talent adapts, evolves, grows,” said Hayes. “Maren’s in that category. If Maren speaks, everyone listens.”

Arsenal will, Hayes knows, be a tough challenge when the teams clash at Meadow Park on Sunday lunchtime. “[Vivianne] Miedema is at the best level I’ve ever seen her, and they’ve got a team who score for fun and who have gone up another level with the quality in front of goal this year,” she said. “Arsenal have recovered from last year, and the league fixture will be closely fought. Miedema is a difference-maker.”

Chelsea know that Mjelde’s skills guarding the right wing and performing as part of a seasoned and settled back line will be crucial if the Blues are to claw their way back to the top of the WSL and leapfrog the north Londoners.