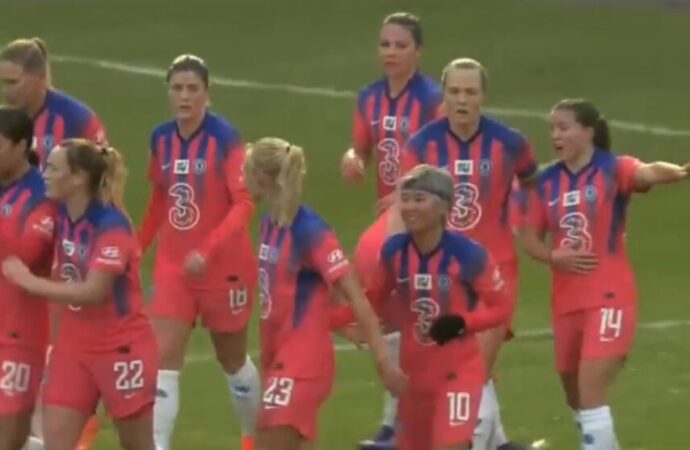 Chelsea Woman won a hard-fought Sunday lunchtime league game away at Brighton to maintain their drive for the title in what is proving a very close Barclays FA Women’s Super League. It was thanks to a goal from forward Sam Kerr that the Blues managed to leave with all three points. Though restricted by a

Chelsea Woman won a hard-fought Sunday lunchtime league game away at Brighton to maintain their drive for the title in what is proving a very close Barclays FA Women’s Super League.

It was thanks to a goal from forward Sam Kerr that the Blues managed to leave with all three points. Though restricted by a well-marshalled Hope Powell Brighton defence, Chelsea finally achieved the breakthrough they were seeking after 21 minutes of a clash in the driving rain.

Jonna Andersson played a neat one-two with Pernille Harder – named this week as the top female footballer in the world in the leading annual international survey published by the Guardian – who then crossed into the heart of the area.

On-form Kerr met it with a glancing header that flew into the Brighton goal, underlining how the Aussie striker’s confidence is blossoming.

Playing in tangerine, the Chelsea players were all-but indistinguishable from the Seagulls’ keeper (bar her socks), which can’t have made life any easier for the Brighton defenders, pictured below seizing the chance of a second-half water break and pep talk on the touchline. 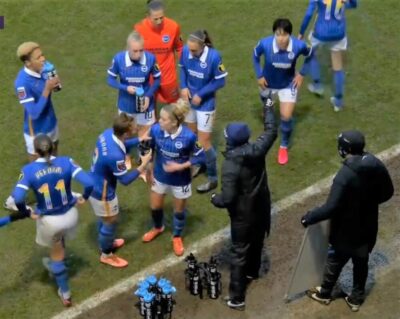 That Kerr goal was all that separated the sides at half-time. Brighton cranked up the pressure early in the second half, with Inessa Kaagman’s looping attempt bouncing off the bar and nearly beating Ann-Katrin Berger in the Chelsea goal in the 46th minute.

The mid-table side, who play at the People’s Pension Stadium, included captain Victoria Williams, who had a short spell with Chelsea way back in 2012, and Danielle Bowman, who made 50 appearances for Chelsea more recently.

Bowman came on in the second half for Lee Geum-Min in midfield.

Although Brighton tried to regain the advantage, the game ebbed away as Chelsea turned the screw, with manager Emma Hayes making intelligent substitutions to keep up the intensity. 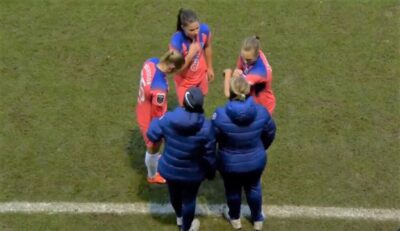 The Blues struggled to get a grip at times, but finally resumed their customary possession game in the final third of the match, with Fran Kirby and Erin Cuthbert having shots saved by Cecilie Fiskerstrand, and Millie Bright and Magda Eriksson mopping up long spells of time by exchanging passes across the pitch, and with Berger.

Emma Hayes (pictured, right, briefing Andersson, Mel Leupolz and Eriksson) brought on Guro Reiten and Sophie Ingle to see the game out, and Chelsea pushed their press higher and higher to pin Brighton back in their own half and hold on to their slender one-goal advantage, mindful that they rarely score more than once on their travels in the league.

Beth England, rested for this match ahead of the second leg of the Champions League clash with Benfica at Kingsmeadow on Wednesday, came on as sub for Harder with 10 minutes to go and – despite a couple of near-scares – the victory was won.