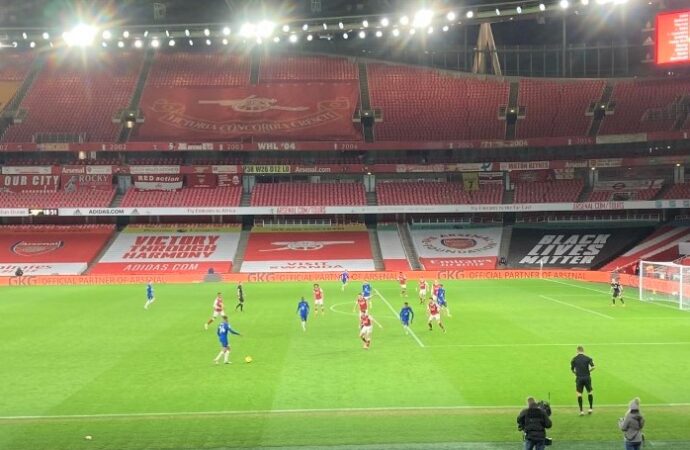 Chelsea attacked in the second half, but it was too little too late at the Emirates on Boxing Day

Chelsea were never going to win the Boxing Day derby against demoralised Arsenal… they had neither the hunger nor the eagerness, nor the pace, and it was clear – from the opening moments – that the Gunners were finally going to end their dismal downward spiral and gain three much-needed points… their first home win

Chelsea were never going to win the Boxing Day derby against demoralised Arsenal… they had neither the hunger nor the eagerness, nor the pace, and it was clear – from the opening moments – that the Gunners were finally going to end their dismal downward spiral and gain three much-needed points… their first home win since the start of November.

The Blues could have done so much better, but when Mason Mount scuffed the outside of Bernd Leno’s post with a centrally placed free kick, 25 yards out, in the 13th minute, it heralded an Arsenal surge that never let up.

With keener, younger players like Emile Smith Rowe and Gabriel Marinelli in for the likes of Pierre-Emerick Aubameyang and Nicolas Pepe, Arsenal hassled and harried Chelsea, denying possession and interrupting any hope of patient attack-building. 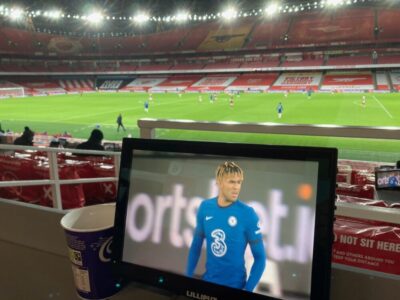 After Reece James tripped Kieran Tierney in the box, and Alex Lacazette scored from the spot, it was plain sailing for the north Londoners. James, pictured left on the press box mini-screen, put on an expression suggesting that he disagreed with the ref’s view of things. But in reality there was no disputing the decision.

That 35th-minute opener was followed just before the half-time break by a Granit Xhaka rocket free kick which flew in past the despairing Eddie Mendy in the Blues goal.

Despite Frank Lampard’s attempts to reverse the one-way traffic in the second half, by replacing Timo Werner and Mateo Kovacic with Callum Hudson-Odoi and Jorginho, Arsenal got a third in the 56th minute… Bukayo Saka drifting a cross/shot over Mendy’s head and in off the far stick.

As rain from Storm Bella swept the empty stadium, Chelsea left their revival far too late.

Five minutes from time, Hudson-Odoi crossed for Tammy Abraham to convert. VAR established that he wasn’t offside, despite the linesman’s flag, so 3-1 it was. Moments later the momentum shifted, and Chelsea won a penalty. But Jorginho’s effort was tame, and easily held by Leno, and the comeback fizzed out during the five minutes that ref Michael Oliver added at the end. 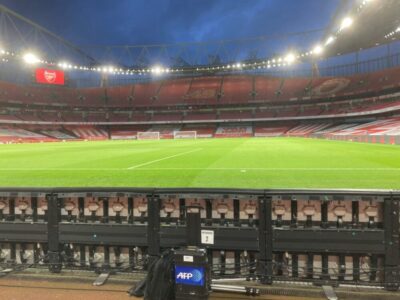 Arsenal deserved their points. Their desperation was translated into a fierce determination to win every 50:50 ball, and all Chelsea’s Christmas Day training and tactical plotting was wasted.

“We were not good enough in the first half, better in the second half, but we’d left ourselves too much to do at that point,” said the Blues manager Frank Lampard with his customary insightful analysis. “I’m not sure if complacency is the right word, but there was definitely a lethargic approach to the first half… and you can’t turn up like that.”

The problem is, establishing why Chelsea were – in truth – second best from the first few passes after they had won the toss and kicked off.

“I am concerned what is at the bottom of it,” said Lamps. “If you come and play slow, on and off the ball, you have a big problem trying to get a result. The message was clear before the game, we had to attack it in the right way and we didn’t.”

What’s doubly frustrating is that Lampard realised very swiftly that all was not well, as Arsenal turned the screw from the start. But urgent whispered conferences with his sidekick Jody Morris couldn’t change anything in the first half, and the Gooners’ third goal early in the second undid the revised masterplan for the second.

After a lousy start to the season, this was just the result that Mikel Arteta needed to steady the ship. The disappointment for Lampard is that had Chelsea started with the fierceness and grit that Arsenal showed, this would have been a much closer contest.

Lampard was left contemplating a string of ‘what-ifs’. What if Olivier Giroud had been given the central start up front instead of the less muscular Abraham? And what if Hudson-Odoi had started, instead of Werner? Werner’s moves were too predictable, when the inventiveness and guile of Hudson-Odoi might have unlocked Arsenal’s defence.