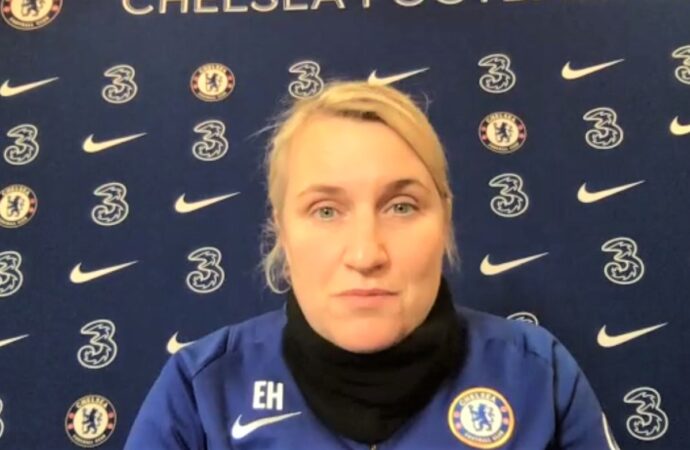 Chelsea Women’s manager Emma Hayes has had Covid-19; it was a worrying time, but she pulled through after a bout of isolation over the festive season. She revealed her own personal tussle with the virus as she spoke ahead of her team’s eagerly anticipated crunch game with high-flyers Manchester United. Sunday afternoon pits first against

Chelsea Women’s manager Emma Hayes has had Covid-19; it was a worrying time, but she pulled through after a bout of isolation over the festive season.

She revealed her own personal tussle with the virus as she spoke ahead of her team’s eagerly anticipated crunch game with high-flyers Manchester United.

Sunday afternoon pits first against second in the WSL at Kingsmeadow, with Chelsea having the chance to go top if they can beat the leaders.

In Hayes’ view, it’s anything but a surprise that United have taken giant strides this season, and are making a serious impact on the title race. “They’ve built similarly to Chelsea, but they’re a club with a big name and big status,” she said.

Chelsea’s Cobham training camp was struck by an outbreak of Covid before Christmas, with several players from the women’s team and academy hard hit.

Hayes herself went down with the virus, along with several of the Chelsea Women players. “I had it,” she said. “I was OK. I was fortunate; I was fine.

“I was isolated over Christmas. I’m grateful, and I hope it doesn’t come back and bite me in the backside at some other point. I was fed up running away from Covid, to be honest, so when I did get it I felt ‘OK, it’s here now. I’m going to do everything I can so it hopefully doesn’t wipe me out and doesn’t affect my parents and everyone else.

“So I had an isolated Christmas, and it was the least I could do to ensure nobody else got it.

On Covid, she said that the country was going through a really tough time and that on Wednesday this week she had a conference call with other league managers to discuss the virus and how to respond to it.

“We had a really good league call between all the clubs,” she said. “Cancellations [due to Covid] may have to happen, but we need to ask if teams are two, three, four or five players short, can we promote our academy players?”

She said that younger players would have to be ready, and could be exposed to top-flight football at short notice, but that it was actually an opportunity to prove themselves.

The managers also talked about the importance of fulfilling fixtures, particularly in the light of elite sport being given the privilege of continuing the play when so many lower tiers had been forced to suspend their games.

“There’s been a lot of toing and froing about how to put games on safely without compromising players who are coming back from Covid,” she said. “It was one of the regular conversations that we have as a group, but it was one that was centred around ensuring the fixtures take place.”

Clean sheets could hold the key to this season’s Women’s Super League, says Hayes. “It’s one of the most important factors in winning the title,” she said. “I’ve always felt that. You can’t compete for titles without a solid defensive unit across the team.”

She was particularly pleased by Sophie Ingle’s performance (behind the brilliance of the Fran Kirby/Sam Kerr show at Reading), where the versatile midfielder ‘became’ Magda Eriksson in the heart of defence for the match.

“Sophie is magnificent; she can play many roles for the team, at the back, in front… she did a brilliant job,” she said.

On goal celebrations, and the need to be mindful of viral risks, the Blues manager said she would remind the players to be sensible and responsible.

In terms of team selection, Hayes said that only Jess Carter was unavailable for Sunday’s match.

“It’s two cracking teams, and I hope we give everyone at home a smile for a few hours on Sunday,” she said, reaffirming her prediction that it will be a four-horse race.

“Man U are hungry and ambitious, and hunger and ambition can take you a long way. But football matches are not predictable, it’s about who takes their chances. It’ll be fascinating; the experienced champions against the hungry challengers!”