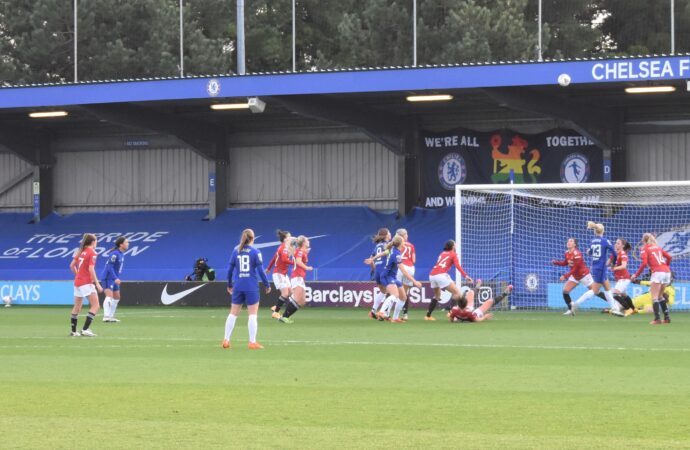 Chelsea are back on top of the table after a 2-1 thriller at Kingsmeadow in the low winter sun on Sunday, beating Manchester United and setting a new record in the Women’s Super League of 31 games unbeaten. “To be undefeated for two years is unbelievable,” said manager Emma Hayes afterwards, pointing out, however, that

Chelsea are back on top of the table after a 2-1 thriller at Kingsmeadow in the low winter sun on Sunday, beating Manchester United and setting a new record in the Women’s Super League of 31 games unbeaten.

“To be undefeated for two years is unbelievable,” said manager Emma Hayes afterwards, pointing out, however, that in the modern era no team had managed to retain the league title.

Chelsea bossed the first half of this enthralling tactical duel, but were only 1-0 up at the break thanks to Pernille Harder scoring just before the 30-minute mark after a goalmouth scramble (pictured above) which saw Fran Kirby shoot first at Mary Earps’ goal after a well-placed Erin Cuthbert corner.

Cuthbert was player of the match, and was back to her impish, most persistent best with a free-ranging role in midfield, scurrying about and hassling and harrassing every United player in her diminutive eyeline. 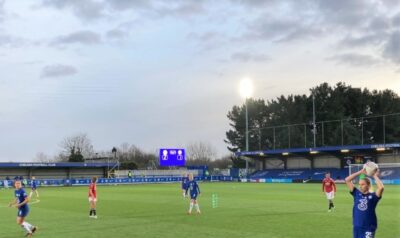 Hayes was full of praise for her performance at the end, as the little Scot trudged off, exhausted, at the end… a job well done.

“She had a job to do, and she did exactly what I asked her to do, to the letter, in exactly the way I wanted her to,” said the manager. “You just don’t find players like Erin Cuthbert any more, and for a player of her age to do what she does and do it with the intensity and application that she does is a dream!”

Cuthbert seemed to have briefly lost her mojo following the disappointment of Scotland just missing out on qualifying for the 2022 Euros when it seemed in their grasp. Psychologically, the pint-sized midfielder seemed to slump in her next matches for Chelsea, but now has managed to regain her grit and determination.

After Harder’s first-half opener (she and Sam Kerr had already had several shots saved by the time she managed to pot one), Manchester United clawed their way back in the second half.

Despite lacking the match sharpness that Chelsea had after their thumping away win at Reading the previous weekend, United were able to deny the Blues possession. Manager Casey Stoney built on the new resolve by taking off Christian Press and putting on the formidible Lauren James after 55 minutes, and it made an instant difference. 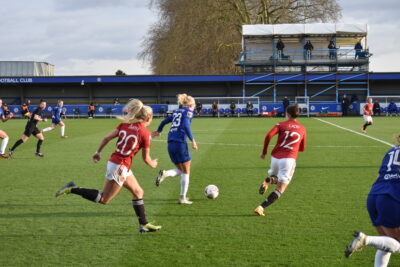 From 20 yards, James unleashed an absolute corker of a shot which bent past Ann-Katrin Berger, went in off the post and nestled in the corner of the Chelsea net. It was a deserved leveller… but it merely re-energised the home side.

As if woken from a trance, the Blues suddenly came back to life. Four minutes after the equaliser, Berger booted a clearance up the pitch, and mighty mouse Kirby was on the chase. Her phenomenal pace (which temporarily deserted her while she was recovering from her heart virus) is back. She outwitted United’s two central defenders, ran at Earps and fired past the keeper for 2-1.

“I take that goal seriously as I was a centre back myself,” said manager Casey Stoney afterwards. “For me, the goalkeeper should never get an assist! You have to stay switched on all the time; it’ll be a lesson for our centre backs.”

Chelsea managed the game to a conclusion thanks to judicious substitutions. With Kerr starting to flag, Hayes took her off and subbed Beth England in her place. She also brought on Sophie Ingle in front of the back four, with Mel Leupolz – who had been fulfilling that role for the first 70 minutes – pushed across to her more familiar position on the right of midfield.

Apart from a couple of long-range efforts, United didn’t trouble Chelsea’s goal again, and the victory was assured.

“I thought we should have been out of sight at halftime with the chances we created,” said Hayes. “Our game plan worked; the players executed what I asked of them. But because there’s so much quality in both teams it became a little bit transitional. United have exceptional players who can hurt you, but I was disappointed at 1-1. Even though they were coming back into the game, it shouldn’t have been 1-1. To come back from that setback is a sign of a great team. 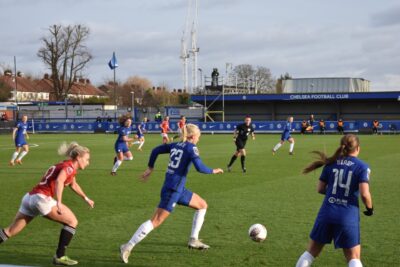 “We were deserved winners today, but anyone can win games… it’s hard to win championships. The champions are always title favourites, but from week to week there can be unpredictability [in results].”

Casey Stoney’s team hadn’t done much wrong. They even won the toss and cleverly opted to change ends so when the sun did burst through it was right in the eyes of Berger in the opening 45 minutes. The manager’s verdict? “It’s fine margins, and we didn’t defend the long ball, so I’m disappointed with that goal. First half we weren’t near our standards, but second half we were better. Their second goal was a sucker punch for us, but we’re not far away.”

Stoney refused to confirm rumours that Maria Thorisdottir (who was sitting in the stand alongside Jess Carter, watching the game) is leaving Chelsea to go to United, but Blues insiders reckon an announcement is imminent in the next day or two.

“In the first half you could tell we hadn’t played for a few weeks,” said Stoney, arguing that her team should have locked down and settled for a point against the champions when they dragged the score back to 1-1. “I’d have been happy for a point today,” she added.

Hayes’ girls now faces a tricky midweek Conti Cup battle up at Manchester City. “I’ve never won up there in my nine years at Chelsea,” the Blues manager admitted.