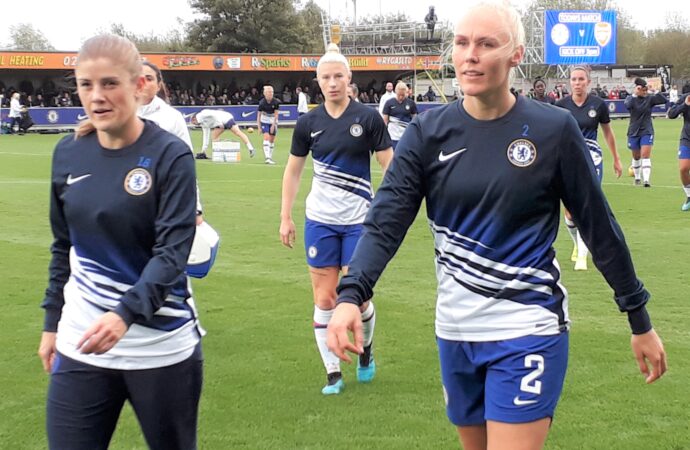 Farewell, Maria. As foretold by The Good Life after the Chelsea v Manchester United match at the weekend, the 27-year-old Norwegian defender/midfielder Maria Thorisdottir has left Kingsmeadow to join United. Maria (pictured, right, alongside fellow Norwegian international Maren Mjelde) sat in the stand alongside Jess Carter for Sunday’s match, which finished in a 2-1 win

Farewell, Maria. As foretold by The Good Life after the Chelsea v Manchester United match at the weekend, the 27-year-old Norwegian defender/midfielder Maria Thorisdottir has left Kingsmeadow to join United.

Maria (pictured, right, alongside fellow Norwegian international Maren Mjelde) sat in the stand alongside Jess Carter for Sunday’s match, which finished in a 2-1 win that propelled the Blues to the top of the Women’s Super League.

With behind-the-scenes discussions already far advanced, Thorisdottir was jokingly asked who she was supporting that day… and briefly lowered her mask to reveal a huge, telling grin! 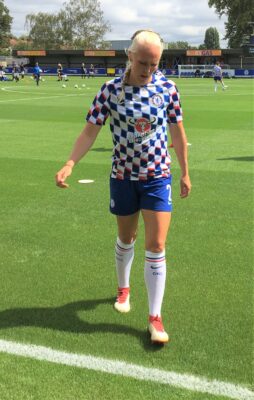 She joined Chelsea Women from the Norwegian side Klepp (she also has 46 international caps), and leaves after three and a half years to join United on a two-and-a-half-year contract.

The move fulfils manager Emma Hayes’ response to a question last week about the January transfer window. “No ins, one out,” she said in reply.

In fact, 18-year-old Charlotte Fleming has also left the Blues’ squad, moving to Leicester City, who top the second tier of women’s football, the Championship.

Thorisdottir, who wore the No2 shirt, made 49 appearances for Chelsea, but never quite regained the pinnacle of form after a sickening head injury which saw her stretchered off the pitch at Kingsmeadow with serious concussion in October 2018 in a match against Liverpool.

She suffered a further lay-off when, a year after the head injury, she fractured her ankle in training.

That kept her sidelined until February last year, by which time the settled back four in defence, and several new signings, meant it proved very difficult for her to regain a regular place in the team.

United manager Casey Stoney welcomed the new signing, describing her as “a fantastic player and character who I think will fit in really well here”. It is understood that the move was delayed until after the Chelsea v Man U match, to avoid any awkwardness. 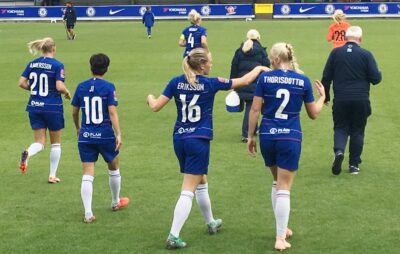 “Her power and versatility as a defender is clear to see, and I know she will add some great competition to our defensive unit and really strengthen our options,” added Stoney. “We’re all looking forward to working with her over the next few seasons.”

Thorisdottir’s deal at United includes an option for a year’s contract extension. “I’m proud to be joining Manchester United; growing up, the club was always big in Norway, so for me to now be a part of the women’s side is exciting,” she said.
Team-mate Carly Telford sent Thorisdottir a “missing you already” message, and the departing defender responded with: “Thank you for three and a half amazing years.” Fran Kirby added: “Go and smash your next journey. I will miss you, and miss how easy you are to scare!”
The Norwegian will take the place of United defender Abbie McManus, who has been sent on loan by United to Tottenham for the rest of the season, a move that could be made permanent if Thorisdottir settles in well. 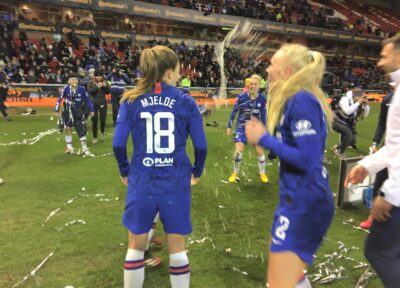 Thorisdottir’s Chelsea debut was impressive. Starting as right back in September 2017 she helped keep a clean sheet in a comprehensive 6-0 victory over Bristol City.
She is pictured left (again with her Norwegian team-mate and buddy Mjelde) celebrating Chelsea’s Conti Cup victory just before the first 2020 lockdown, a victory over Arsenal at Nottinham Forest’s stadium.

“Maria has been a great asset to the team and we would like to thank her for her contributions both on and off the pitch during her time at Chelsea,” said Emma Hayes. “I wish her all the best for the future.”

Chelsea Women travel to Bristol City on Sunday, hoping to set a new Women’s Super League record of 32 games unbeaten. They are currently joint holders of the 31-game record.

The Blues last played the Robins in September, winning 9-0 at home; the most goals Chelsea have ever scored in a single Barclays FA WSL match, with all nine scored by different players.