Magda: I aim to manage Blues 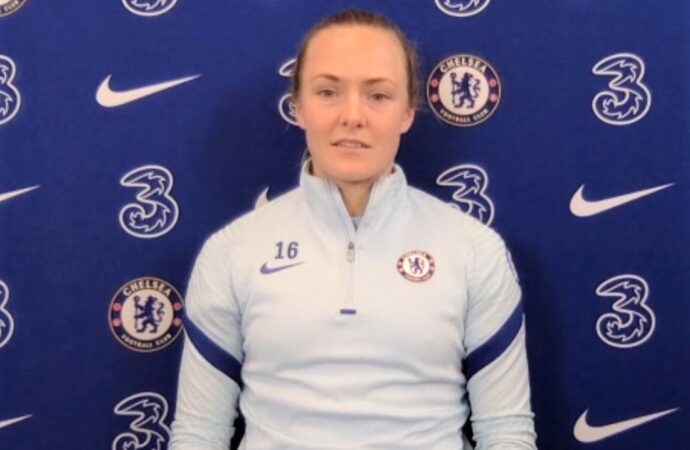 Days after Chelsea manager Emma Hayes tipped Magda Eriksson to make the step up to coaching the Blues at some stage in future, the captain admitted it was her dream too. Eriksson, 27, is one of several senior players in the team currently taking her Uefa B coaching licence. “It’s a massive honour that she

Days after Chelsea manager Emma Hayes tipped Magda Eriksson to make the step up to coaching the Blues at some stage in future, the captain admitted it was her dream too.

Eriksson, 27, is one of several senior players in the team currently taking her Uefa B coaching licence.

“It’s a massive honour that she would say those kind things about me, but I’m still at the point in my career that I’m focused on the here and now, and what I’m doing as captain of Chelsea,” she said of Hayes’ endorsement.

“There is definitely that possibility, and I do see myself staying in football in some way. Is it coaching at Chelsea? I’m not there yet, but I wouldn’t rule it out!”

She also welcomed the chance of more diversity in football management, and said that the day was getting closer when a woman would take charge of a top-flight men’s team.

“Diversity on all levels is what’s needed at the moment,” added the footballer who, for seven years, has been the partner of Blues striker Pernille Harder.

She was speaking following press speculation that Emma Hayes had been offered the job of managing AFC Wimbledon, the men’s team that until last year groundshared Chelsea Women’s Kingsmeadow home.

“Emma is always striving to reach new levels,” said Eriksson, when asked about her manager’s qualities. “But no one in the team wants her to leave; we’re really finding our feet now. I don’t think anyone would like her to leave, but the possibility of a woman in charge of a men’s team is now a fact.” 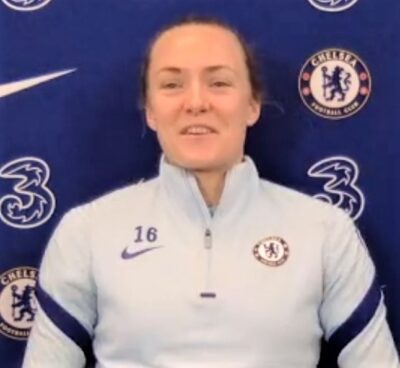 Hayes herself gave short shrift to the rumours linking her to Wimbledon men’s job. “I’m the manager of Chelsea, representing elite world-class players and it’s an amazing job I’ve spent nine years putting all my energy into. I’m not looking for another job.”

She regards it as disrespectful to Chelsea to speculate on any other job, and has repeatedly made that clear. However, she did speak more generally about the need for more managers to be drawn from black and ethnic minority candidates, and agreed that, in general, there should be women managers in the men’s game.

“When football world is ready to adhere to the diversity codes so that BAME communities plus women are given the opportunities in football, then I’ll see that as a step forward,” she said.

“This is not a conversation about Emma Hayes and Wimbledon; we should be having larger conversations about creating opportunities across the diverse spectrum so that chances in the men’s game is not limited to people in privileged positions.”

Hayes said that football had a responsibility, as a profession, to modernise, and lamented the fact that you could count BAME managers (or female managers) on the fingers of one hand in the men’s pyramid.

Pressed whether Wimbledon could afford her, she said: “Absolutely not!”

Hayes said her focus was on Wednesday night’s Conti Cup clash with West Ham at Kingsmeadow, a match that could propel her team into the final at Watford’s Vicarage Road ground on Mothering Sunday, a year after Chelsea lifted the trophy for the first time at Nottingham.

That was the last match the Blues played in the era before facemasks and social distancing as the first lockdown struck days later.

“It’s a cup that we’re holders of, and I’m desperate to get through to another final. It’ll be a really tough game; I’ve watched West Ham under their new manager [Olli Harder].

“We’ve lost a lot of semi-finals; there’s nothing worse than being this close and losing out.”

She has a full quota of players to choose from, with Erin Cuthbert and Jess Carter back to fitness after sitting out the Blues’ 4-0 win over Tottenham in the WSL on Sunday.

Hayes said that “successive winning is one of the hardest things to do”, but that she was determined to give it her best shot to keep the Conti Cup in the Chelsea trophy cabinet.