Blues bounce back in style 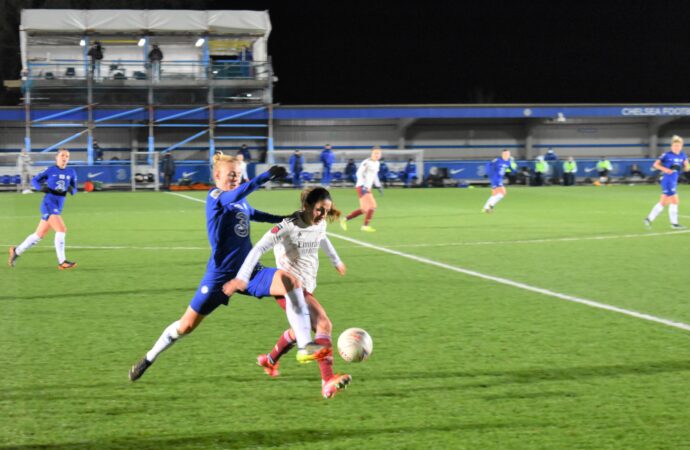 Chelsea put the weekend’s shock defeat by Brighton behind them and fired three cracking goals past arch rivals Arsenal at a bitterly cold Kingsmeadow to re-energise their campaign to become the first Women’s Super League side to retain the title. “Sometimes you need a defeat to wake you up,” said manager Emma Hayes. It was

Chelsea put the weekend’s shock defeat by Brighton behind them and fired three cracking goals past arch rivals Arsenal at a bitterly cold Kingsmeadow to re-energise their campaign to become the first Women’s Super League side to retain the title.

“Sometimes you need a defeat to wake you up,” said manager Emma Hayes.

It was a magnificent midweek bounceback, with every player fighting like tigresses in a concerted show of grit and determination, both in attack, defence and transition, to temper Sunday’s disappointment.

Sophie Ingle’s gritty challenge on Arsenal’s Danielle van de Donk in the picture above exemplified a display which now means Chelsea sit top of the tree in the league for the next three weeks, during an international interlude. 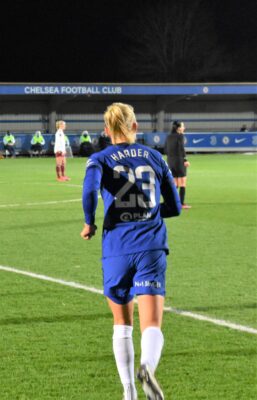 Pernille Harder, right, scored twice while Fran Kirby netted the third, galloping away down the field in the dying moments, and running on despite a shooting cramp in her calf which left her hobbling slightly at the final whistle.

Racing through, one-on-one, on Gunners keeper Lydia Williams, Kirby added the cherry on top of what was a knickerbocker glory display of football.

It was, in the end, a comfortable scoreline, although the teams were evenly matched for much of Wednesday night’s match, played in zero degrees, with steam rising from the footballers like the clouds engulfing a thoroughbred Derby champion after the saddle’s removal in the winner’s enclosure.

Emma Hayes beefed up her team from the slightly below-strength side she’d fielded against the Seagulls, bringing back Millie Bright, Harder, Maren Mjelde, Kirby and Ji So-Yun into a line-up which could, frankly, have beaten any women’s team in Europe.

Joe Montemurro’s Arsenal barely knew what had hit them in the fast and furious opening minutes, but the Gunners got a grip and steadied the ship, and chances were evenly matched in an absorbing, but goalless, first half. 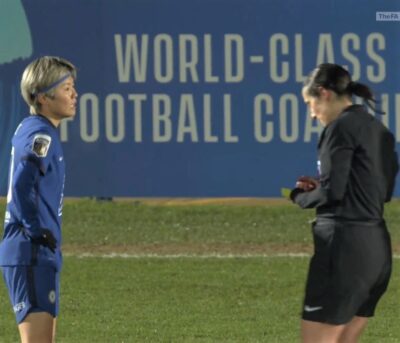 Bookings for Mel Leupolz and Ji, left, gave Hayes pause for thought at half-time, as she didn’t want to risk losing a player to a second yellow as a result of Amy Fearn’s strong, no-nonsense refereeing.

But the breakthrough, when it came, was simply magnificent. With nobody closing her down, Harder fired a right-foot shot low into the left corner and past Williams from 25 yards with 48 minutes on the clock to make it 1-0. Sam Kerr, who was the most industrious player on the pitch, seemingly fitted with fresh Duracells for this derby game, came close to doubling the lead after being teed up by Kirby on 57 minutes, but saw her shot ricochet off the bar.

Less than 60 seconds later, however, it was 2-0. Kirby fed Harder, who fired high and hard into the roof of the net (below), with Williams flailing at icy air as Chelsea turned up the pressure. 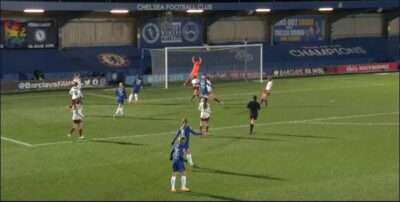 As a precaution (and as the team had discussed, apparently, in the dressing room at the interval), Ji and Leupolz were replaced by Erin Cuthbert and Beth England, and the Blues dug in to manage, and see out, the remaining quarter of an hour.

They did it with aplomb, stifling Arsenal’s attempted attacks, winding down the clock by winning corner after corner, and finally notching a third goal from Kirby’s last-gasp break as we entered stoppage time.

When she rounded the keeper and slid the ball home, in one of her trademark finishes, it was all over for Arsenal.

“We’ve been beaten by three very good quality transition moments tonight,” said Montemurro. “They’re a very good team, they have powerful players. I take full responsibility. If we look too far into this game it’ll probably drive us crazy. There wasn’t a lot wrong, apart from them scoring three goals and us none!”

Emma Hayes was delighted by her team’s response to Sunday’s loss, which leaves the Blues 12 points ahead of her former side in the WSL at the international break.

Chelsea don’t play another domestic game until March 7, when they are away to West Ham.

“Derby wins are great, they really are,” she said. “In the first half we struggled a little in midfield, and got a little overrun and underhit passes to each other and didn’t hold the ball up well enough, but it was a calm dressing room at half-time.

“There’s a lot of quality there, and once we got the goal at the start of the second half there was only going to be one outcome.”

She praised the “brilliant defensive performance” from the team, which for Hayes was the biggest plus of the evening.

“Everybody knows what the standards are at Chelsea; the pressure and expectation are relentless, but it’s a place for the best to thrive.

“Only the best, and the highest standards, will keep this dream machine flying. That’s the demand that I place, and I won’t compromise that.” 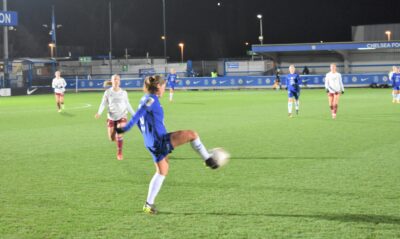 She said that Wednesday night’s response to Sunday’s defeat showed that everyone shared her vision.

“I believe in winning football. There are moments to do the right thing at the right time; I don’t get too philosophical about it,” she said, reaffirming her desire to make the Women’s Champions League a top priority, alongside achieving the feat of becoming the first club to achieve back-to-back WSL titles.

“I know how important it is for my players to have Champions League football – that’s our first objective,” she said. “But no team has won back-to-back titles in the WSL, and we still expect Man City and Man Utd to be in the race… even if it’s in our hands.”

She added that teams sometimes need a defeat to wake them up. “It reminds you that you can’t be complacent for a single moment,” she said, stressing that she had enough experience as a football manager to remain calm and patient, and solve problems collectively.

Aussie forward Kerr, Hayes concurred, had “run her socks off” in the game. “She had to do so much work defensively; she and Fran. She was such a good outlet for us on the counter. Sam came off that pitch with so little left in the tank!”