Beth knows the laws of the game 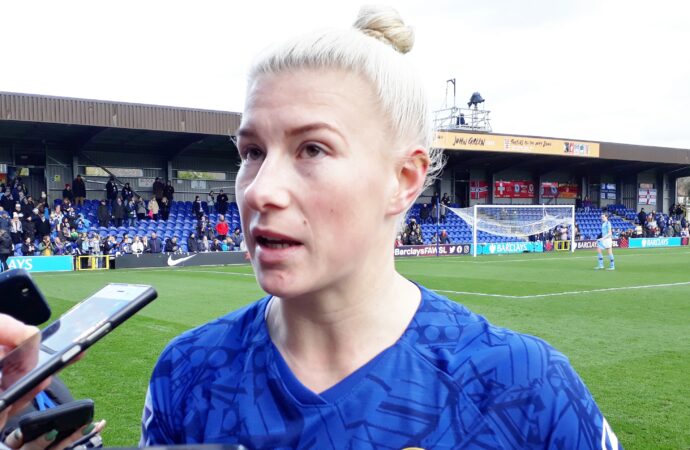 Using the dedication of Chelsea striker Beth England as an example, the Football Association has launched a programme to encourage young female footballers to work on careers outside the game, to secure long-term futures after their playing careers end. The FA’s Dual Career guides plot pathways for players, parents, teachers and football club staff to

Using the dedication of Chelsea striker Beth England as an example, the Football Association has launched a programme to encourage young female footballers to work on careers outside the game, to secure long-term futures after their playing careers end.

The FA’s Dual Career guides plot pathways for players, parents, teachers and football club staff to raise awareness of opportunities and support services that they might not otherwise have considered.

The Blues’ Beth England is studying family law when she isn’t training and playing, while Arsenal’s Leah Williamson is pursuing a dual career in accountancy when she isn’t on the pitch.

Working with the Sport England-funded Talented Athlete Scholarship Scheme, the FA guides focus on three groups: 14s to 16s, 16s to 18s, and over 18s, and cover football, education and work.

Research has been undertaken to discover why so many footballers abandon higher education when they take up the sport, leaving many without options if – say – injury forces early retirement from the beautiful game.

“We have a responsibility to ensure players know about opportunities that exist outside the game, whether it’s 14-year-olds or players in the Barclays FA Women’s Super League,” said David Faulkner, FA women’s head of performance, who hopes clubs like Chelsea will establish a link to a local college.

England, 26, did her A levels, studied law part time after winning a scholarship to the private BPP University when she played for Doncaster Belles, and is now doing a law degree; her aim being to work in the field of family law once she hangs up her boots.

She supported herself by working in a fish and chip shop at a time when her footballing earnings were £25 a week, and doing Christmas temping at Marks & Sparks.

But she got a break when Paul Green – Emma Hayes’ assistant manager at Chelsea – left Doncaster Belles to take up his new role, and – mindful of the hard work he’d seen the young player put into training and playing – advised Hayes to give England a chance.

She joined the Blues in 2016, spent a time on loan at Liverpool, but is now a key part of the squad… playing up front in both legs of Chelsea’s Champions League duel with Atletico Madrid, and fully expecting to take part in this weekend’s Conti Cup final against Bristol City.

As a teenager she completed a 12-week pathway course to a higher education certificate in legal studies at a college in Shepherds Bush, commuting back and forwards to her home in Barnsley, explaining: “I started studying social work, but it wasn’t for me. I’ve always been interested in law – I used to watch CSI, Criminal Minds and Law & Order with my mum! But I’m really interested in the family side of things and I would eventually like to work in family law.

“I never thought football would be a full-time job, so I always knew education would have to come into it. After football you need to make sure you have something set up, ready for that transition.”