The Wolf’s at the door 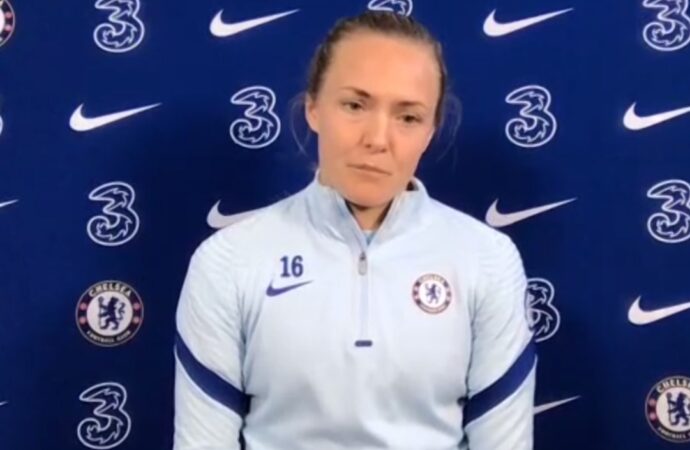 After being showered with praise by boss Roman Abramovich, Chelsea Women’s manager Emma Hayes has to repay the faith by inspiring her team to a good performance in the midweek first leg of the Champions League quarter-final. Wolfsburg have been Chelsea’s bogey team in the past, but a lot of water has flowed under the

After being showered with praise by boss Roman Abramovich, Chelsea Women’s manager Emma Hayes has to repay the faith by inspiring her team to a good performance in the midweek first leg of the Champions League quarter-final.

Wolfsburg have been Chelsea’s bogey team in the past, but a lot of water has flowed under the (Stamford) bridge in the three years since the clubs met, and since the German front-runners last ditched the Blues out of the competition.

For one thing, Pernille Harder – regarded as one of, if not the, best players in Europe – has been poached from Wolfsburg by Chelsea.

The fact that she also happens to be Blues club captain Magda Eriksson’s partner in life means there’s been plenty of info exchanged around the Chelsea squad since the draw was made.

But Magda (pictured above) knows the Wolfsburg team well too, having followed them closely when Pernille was playing there. Plus the squad has the added bonus of Mel Leupolz, whose background has also been in German football.

“It’s exciting to play a team we’ve played before, to see where we are,” said Magda at the press conference, ahead of Wednesday’s first leg in Budapest. “I hope we can go out with no fear and just play our game. I followed Wolfsburg very closely when [Pernille] played there, but our analysis team has done a great job too.

“We are at the top; as far as Chelsea have ever been, this is the best team I’ve ever played in. But it will be a difficult game,” she said, adding that the English league is getting more and more attractive to players overseas. “I know a lot of Swedes are talking about moving to England as there are so many teams to choose from.”

Hayes is chuffed about the fact that, from September, Women’s Super League games will be shown on the BBC and Sky, believing it heralds a new era for women’s football, as well as letting more cash permeate through the sport.

“It’s a day everyone’s worked really hard towards. Everybody involved in the sport, both on and off the pitch, have driven a new standard,” she said of an £8million agreement which represents a record deal, worldwide.

“It means we’re valuing a woman’s game that has demonstrated that it’s a product people want to watch. With prime time and regular slots, the onus is now on the clubs to make sure our games are on, week in, week out.”

She has been critical in the past about the state of some of the pitches in the WSL, and knows some clubs will have to make a bigger effort to ensure winter games go ahead, citing Kingsmeadow in Kingston as being an excellent example of a good stadium and a terrific playing surface. “Cancellations should be rare,” she said.

“The drive for more wages and better conditions is there, but we’ve not been generating any real revenue yet; this is the first watershed moment when a trickledown effect means clubs can prosper.”

She also hopes that it will be the incentive to persuade other top-flight clubs, rather than simply the wealthy ones, to launch their own women’s teams, to beef up the leagues and lift the overall standard, and dreams of the day her own young son will feel it completely normal to sit down and watch a women’s match as part of his routine.

It will, she concedes, mean different kick-off times. “But if we want the best product, we have to bring revenue into the game, and the gates alone won’t yet let us do that. Football is no longer Saturday at 3pm, or in our case Sundays at 2.”

Turning to the Wolfsburg matches, Hayes said that Beth England was the only significant absentee. Having sustained concussion in the Atletico Madrid game, she’s back in non-contact training, but isn’t yet ready to feature.

Hayes is licking her lips about the prospect of two games in a week against Wolfsburg. “They’ve won every time in the big games against us, so I’m curious to see how we’ve improved in the three years since they played us,” she said. 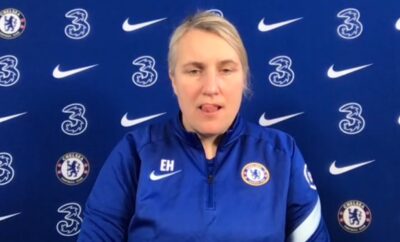 Uefa’s logic, however, is unfathomable, in making Chelsea Women twice travel from a homeland of diminishing Covid risk to Hungary, where the coronavirus situation gets more serious by the day.

It means there’s no home advantage for either tie, separated by a weekend match in the WSL. But it will be Chelsea’s hardest challenge of the season as Wolfsburg are unbeaten since November.

“Nothing with Covid makes sense. I’ve got used to playing away games at this stage. Covid has changed a lot of things. It seems pretty mad to go back and play a week later, as you have to play over two legs,” she said. “I put this game on a par with some of the battles we’ve had with Manchester City.”

Was she flattered about Chelsea owner Roman Abramovich’s recent kind words? “It’s lovely to hear his thoughts in public; in private it’s always been the case,” she said. “I’m glad everyone else gets to hear from our owner what I already know. Now imagine what our game will look like if all clubs invest in women’s teams. If it triggers another growth spurt in the sport, that’s all we want to see.”

Abramovich actually said: “The women’s team is a critical part of Chelsea and shapes who we are as a club. If women’s football received the same level of support as men’s football, the sport would obviously be equally successful on the business side. Emma Hayes has been remarkable in her work with the team.”

Maren Mjelde had knee surgery last week, and will not play an active part in competitive matches again until August, if all goes well. However, she hopes to be stumping about in a protective leg brace and assisting Emma Hayes with dressing room messaging on matchdays and sideline coaching on training days.