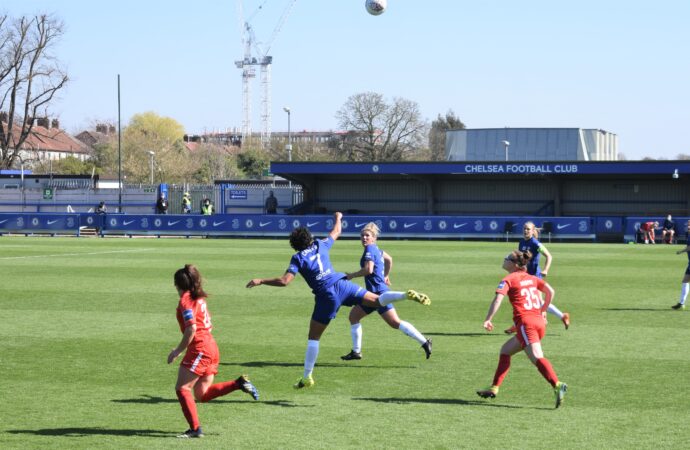 Another all-conquering performance by Chelsea Women – and another Sam Kerr hat-trick – saw off Birmingham City at the weekend as the Blues recorded a 6-0 victory. In a match which again demonstrated the gulf between the top and bottom of the Women’s Super League, Chelsea eventually broke down a dogged five-at-the-back defensive line in

Another all-conquering performance by Chelsea Women – and another Sam Kerr hat-trick – saw off Birmingham City at the weekend as the Blues recorded a 6-0 victory.
In a match which again demonstrated the gulf between the top and bottom of the Women’s Super League, Chelsea eventually broke down a dogged five-at-the-back defensive line in the 25th minute, with Erin Cuthbert’s low drive being parried by keeper Hannah Hampton, and Kerr pouncing on the loose ball for 1-0.
Kerr had her hat-trick in the space of 20 minutes before the interval; her second prodded home after Pernille Harder’s initial header had been saved, and the third just before the half-time whistle, heading home a Cuthbert free kick.
Wholesale changes by Emma Hayes at the very start of the second half saw the welcome return of Beth England up front after her concussion break, with Hannah Blundell and Guro Reiten also given 45 minutes.
Fran Kirby got her obligatory goal just after the hour mark, England squaring the ball for her to net.
Birmingham brought on Chelsea loanees Jamie-Lee Napier and striker Emily Murphy, wearing a curious pair of swimming goggles which she eventually discarded as they were steaming up in the spring sunshine. 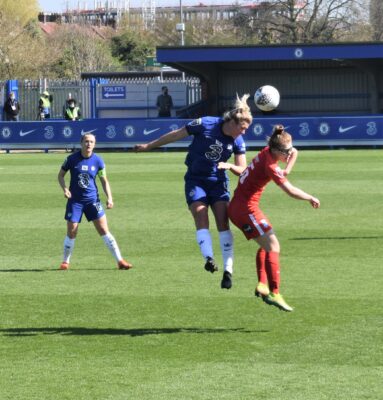 Reiten had a superb half. Industrious and focused, she provided a string of inviting corner kicks, and was also rewarded with a goal of her own in the 75th minute, sweeping a left-foot shot home.
There was still time for a late, late flourish; a sixth goal after Kirby ran through the Brummie defence and buried her shot in the net.
Manager Carla Ward said that in a chat with Hayes before kick-off, she’d looked at the teamsheet and joked that Chelsea could have kinder and given a few more people the day off. At the end, in another conversation with the Blues gaffer, she reported that even Hayes had been surprised at the extent of Chelsea’s dominance.
“It was disappointing to concede those two goals just before half-time,” said Ward. “It’s a tough one to take; we haven’t been beaten by six goals all season. They were exceptional; the way they move the ball, they’re technically and tactically in such a good place. Sometimes you have to just sit back and admire them.”
Birmingham’s approach had been one of attempted containment in the first half, with only rare forays upfield sparked by long kicks from the keeper.
Hayes was delighted with her team’s performance, coming so soon after the club’s hard-fought European Champions League quarter-final triumphs against Wolfsburg.
There was no hangover from the trips to Budapest as the Blues looked resolute and robust from the start of Sunday’s lunchtime clash. Goal difference could yet prove important in the final reckoning, so to net six without reply was a real bonus. Hayes, however, disagrees. She says that the only target is to win every match, and that that will secure glory.
“It was a performance that the whole squad contributed to; this was the first game this season that I thought whoever I put in the team it would be good,” she said. 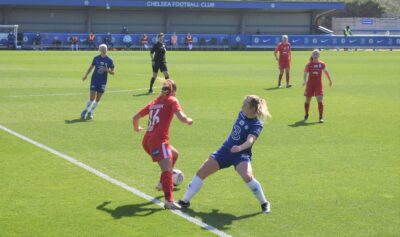 She added that Kerr’s confidence is now higher than ever. “She pounces, cat-like, gazelle-like; she was so thoroughly deserving of her hat-trick,” she said.
“It’s relentless for the players. I can’t ask any more of them,” she said, with half an eye on the impending clash with Manchester City in the league. That game is likely to be shifted for the Blues’ European semi-final matches, so it could end up being the title decider at the very end of season.
Hayes feels that Sam Kerr is now fully relaxed, contented and integrated after a spell of adjusting that, Blues insiders privately admit, has taken longer than most people thought.
“Sam is the ultimate team player, and this is the happiest, calmest and most settled she’s been,” said Hayes. “She so often gets the first goal for us just when we need it, and that’s priceless.”
Hayes said she’d been delighted that Beth England had been back in the team after her head injury.
She also praised Reiten’s contribution. “Guro is an exceptionally talented footballer, and you saw from her performance in the second half that she adds so much value to the team.
“She’s someone who has been exceptional coming off the bench for us. She’s the ultimate team player; she’ll do anything she’s required to do.”