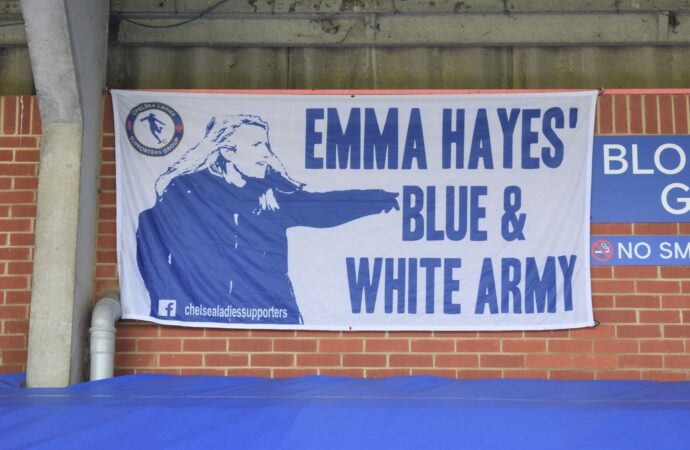 Chelsea have it all to do in the second leg of their Champions League semi against a strong Bayern side, trailing 2-1 after their trip to Germany. Although Ji So-Yun hit the underside of the bar with a fine volley that bounced down and away in the second half, an equaliser for the Women’s Super

Chelsea have it all to do in the second leg of their Champions League semi against a strong Bayern side, trailing 2-1 after their trip to Germany.

Although Ji So-Yun hit the underside of the bar with a fine volley that bounced down and away in the second half, an equaliser for the Women’s Super League title holders proved elusive, and the team visibly tired as the final whistle loomed – a product of their draining midweek draw up at Man City.

As ref Sara Persson blew for full time, the team were absolutely cream-crackered, and in need of a rest, a rethink and a reset ahead of leg two.

Emma Hayes will take some positives. An away goal could yet prove crucial in the last reckoning at Kingsmeadow next Sunday lunchtime. And there were no serious injury worries after the match. But with concerns about the cumulative workload at the fag end of this Covid-blighted season, recuperation will be top of the list of tasks.

Captain Magda Eriksson, who was expected to be fit again after sustaining an ankle twist in the FA Cup tie nine days ago, was still not strong enough to list as a sub, and the most extensive and classy squad in the English women’s game suddenly looks to have gaps in depth.

Bayern got the breakthrough after 12 minutes of this hectic end-to-end duel when Sydney Lohmann met a cross from the right which just eluded Ann-Katrin Berger’s fingertips. The keeper seemed to be trying to catch, when a sturdy punch would have been the better option. The German forward volleyed, and Millie Bright, on the line, couldn’t keep it out.

With a back four of Jess Carter, Bright (stand-in captain), Sophie Ingle and Jonna Andersson, there was enough grit and experience to withstand most attacks, but the fact that the identical defensive line had been pushed to the limit on Wednesday night in Manchester meant the second half in Bavaria became a challenge.

The Blues levelled, slightly fortuitously, in the 22nd minute. Guro Reiten, a wily campaigner, won a free kick in a dangerous area, took it herself and drifted over an excellent left-footed teaser which bounced around, struck poor Mellie Lupolz in the head and looped over everyone into the net.

It was 1-1 at half-time at the FC Bayern Campus, but Bayern scored the pick of the goals in the 57th minute as Hanna Glas fired a shot at the Chelsea goal, with Andersson backing off when she might have opted to fly in with a disruptive tackle. The ball sailed in at the tight angle, leaving Berger crumpled in a heap around her post.

A scattering of subs failed to give Chelsea another equaliser, and now it’s back to Kingsmeadow – with a clear week ahead to recover fully, and prepare.

Pernille Harder was player of the match for the Blues – a terrific performance, while Leupolz, Ji and Reiten were also on top form. Fran Kirby, still seemingly affected by her poor backpass that let City back into the midweek game, found it hard to make an impact, and Sam Kerr had flashes of brilliance, while failing to really link up with her Special K partner.

But it’s the back line for Chelsea that need Eriksson’s focus and mustering, and without her in the second leg, Bayern may prove too strong.

Hayes will earn her corn this week in the most important preparation of any team she has managed.