Cheers! Blues get to final 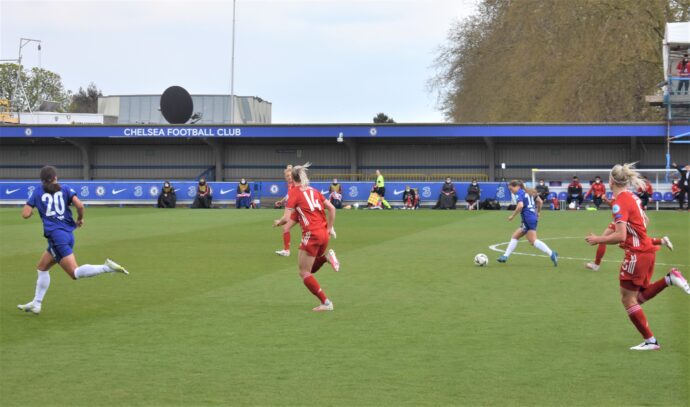 Swigging bubbly at her post-match press conference, an overjoyed Emma Hayes saluted her team on reaching the first Champions League final in Chelsea Women’s history after a deserved victory over Bayern Munich at Kingsmeadow on Sunday lunchtime. The Blues’ manager has made no secret of her desire to win the biggest trophy in Europe, and

Swigging bubbly at her post-match press conference, an overjoyed Emma Hayes saluted her team on reaching the first Champions League final in Chelsea Women’s history after a deserved victory over Bayern Munich at Kingsmeadow on Sunday lunchtime.
The Blues’ manager has made no secret of her desire to win the biggest trophy in Europe, and a tense thriller of a match seemed to encapsulate that yearning as she broke down in tears at the end, hugging stalwarts Hannah Blundell and Drew Spence, who have been on the journey with her since her first day at Chelsea. 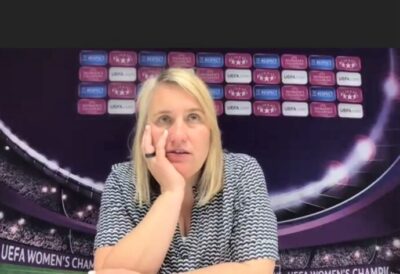 When Swiss ref Esther Staubli blew the final whistle, it had finished 4-1 to the Blues (5-3 on aggregate) with a last-minute flourish from Fran Kirby adding a sheen to the scoreline as she fired the final goal into an empty net with Bayern keeper Laura Benkarth stranded at the wrong end of the pitch.
The sides were evenly matched, although Chelsea had captain Magda Eriksson back in the heart of their defence after a fortnight’s injury lay-off.
Jonna Andersson, who came in for some criticism after the Bavarian leg of this Champions League semi-final, was dropped to the bench, with Naimh Charles slotting in as left back.
Knowing they were 2-1 down from the first leg, the onus was on the Blues to level the aggregate score, and a Special K link-up between Sam Kerr and Kirby in the 10th minute paid dividends. Kerr and Kirby galloped upfield (main picture, above) in a classic counter-attack, with Kirby slotting the ball home to make it 1-0 on the day.
Bayern’s equaliser was the most spectacular move of an absorbing end-to-end game. From fully 35 yards, Sarah Zadrazil let fly… her shot grazing the underside of the crossbar and giving Ann-Katrin Berger no chance. Chelsea as a team could, however, have reduced the risk of it happening. Every single player, including Kirby, was concentrated back in the area when it would have been more sensible to send the No14 up towards the halfway line to distract Bayern’s defenders. As a result, there was nothing to stop the Bayern No25 from lining up her shot.
Ji So-Yun gave Chelsea the edge again just before half-time. Kirby was fouled on the edge of the area, and Ji took the free kick. It riccocheted back to her off the Bayern defensive wall, but her follow-up found its way through a thicket of legs to nestle in the corner of the net.
It looked for all the world as if the game was heading for extra time, with both legs finishing 2-1 and each side having an away goal. But in the 84th minute Jess Carter floated a free kick into the Bayern area and Pernille Harder – largely a peripheral player to that point – ghosted in to head home. 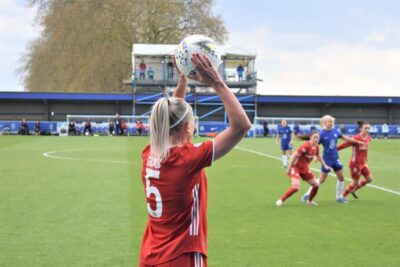 Chelsea were clinging on to their lead in the dying minutes as Bayern threw everything (including their goalkeeper) forward in the final set-pieces, and it was as a result of a late, late Blues breakaway from a German corner that Kirby raced away and scored in an unguarded net to put the cherry on top of a memorable victory and see the Blues through to their first Champions League final, against Barcelona in Sweden on May 16.
Bayern coach Jens Scheuer said: “We’re disappointed, of course. I think 4-1 is a very hard result, but it’s not deserved. After the equaliser we had good opportunities to take the lead ourselves. Chelsea were the more effective, clinical team. We committed too many individual mistakes today, and these are things that shouldn’t happen. Still I think we created three or four good opportunities.”
How will Chelsea do in the final? “That’s a question for Emma Hayes. In the final everything is possible,” he said, adding: “Good luck to Chelsea in the final.”
Hayes herself was jubilant with the 5-3 aggregate win. This is the trophy she most wants to get her hands on, and she will now navigate her way through a couple of domestic games in the coming week that could also clinch the Women’s Super League title, and keep half an eye on the FA Cup – a scheduled match which was due to take place the same weekend that Chelsea fly to Sweden, where captain Eriksson hopes to lift the Champions League trophy on her home turf. 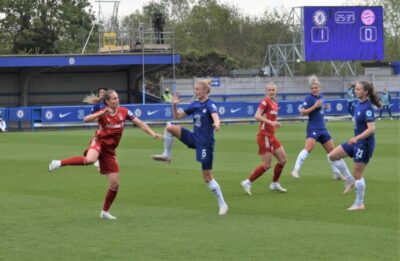 Hayes admitted that there had been moments, late on, when she was hanging on for dear life to her sanity, turning her heart monitor and blood sugar gauge round to reporters at the press conference to show the highs and lows she had gone through on this memorable afternoon.
“Everyone executed what they had to do. We put thousands of hours into what we do; I almost can’t let the tears go. I’m a very maternal figure here. I’m happy for everyone who’s put a shift in,” she said. Hayes had shown a motivational video to the team just before the match, featuring a female boxer declaring ‘I am the best’ before a fight.
“My team were mentality monsters,” said Hayes. “I just wanted to go to this final. I want to win this competition. This is a lot of people’s dream.”
With Maren Mjelde long-term injured (though she said before the game that she was going to be rid of her single crutch next week – an encouraging sign on the road to recovery), and no Guro Reiten or Erin Cuthbert on the pitch, the corner kicking duties fell to Jess Carter. She was dazzling in everything she did; fully focused in her defensive role, but keen to gallop away down the left wing to tee up attacks.