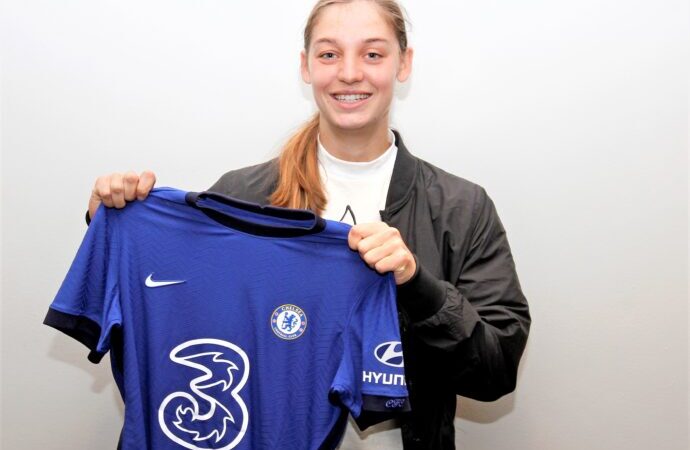 Chelsea Women have signed a new defender to bolster their chances of completing a third straight league win on the spin next season. The new arrival is 22-year-old Dutch defender Aniek Nouwen, who has agreed a three-year deal which will keep her at the club until the summer of 2024. “I’m proud to be blue

Chelsea Women have signed a new defender to bolster their chances of completing a third straight league win on the spin next season.

The new arrival is 22-year-old Dutch defender Aniek Nouwen, who has agreed a three-year deal which will keep her at the club until the summer of 2024.

“I’m proud to be blue for the next seasons. Other clubs were interested, but I made my decision to join Chelsea pretty fast!” she said. “To play in the English league has always been a dream as it is the best competition and it provides the best opportunity for me to develop even more. I’m very honoured and proud to become a Blue and I can’t wait to be part of this winning team. I want to win prizes and play in the big games.”

Currently with PSV Eindhoven – who are in the running for the Eredivisie league title in the Netherlands – she will add to manager Emma Hayes’ defensive options in 2021/22. She currently wears 14 for her club, but as that shirt will not be relinquished by Fran Kirby, she’ll have to pick a new number.

With Maren Mjelde still several months from a return, another first-choice defender was needed. But Nouwen’s arrival will still be a blow to the likes of Hannah Blundell and Jonna Andersson, who are no longer automatic choices at the back following the advancement this season of Naimh Charles and Jess Carter.

Millie Bright and captain Magda Eriksson seem secure in their positions for the moment, especially with the Women’s Champions League final looming this weekend in Sweden against Barcelona, but a longer-term succession is in the planning. Short-term it means some of the younger squad members who had been hoping to advance to the first team may now have to go out on loan next season.

Nouwen made her professional debut in 2016 with PSV, with 69 appearances and 15 goals to her name. PSV are in with a shout of the KNVB Women’s Cup, with the final against Den Haag next month, having already recently beaten Ajax.

She made her international debut for the Netherlands against Poland in 2019 and has made 14 appearances for her country. She has also played at U19 and U17 levels.

“I’m looking forward to joining up with the team, it’s all going to be very new but I’m really excited,” added Nouwen.

Emma Hayes described her as “an exciting addition to our squad”. She added: “Not only does she bring a wealth of league and international experience for her age, she is also very composed on the ball and her physicality will suit the English league. I have no doubt Aniek is one of the best young defenders in the world and has a very bright future ahead of her with us. We cannot wait to welcome her to Cobham this summer.”

Nouwen aims to join the Netherlands national team in Japan this summer at the Tokyo Olympics.