It’s the blues for the Blues 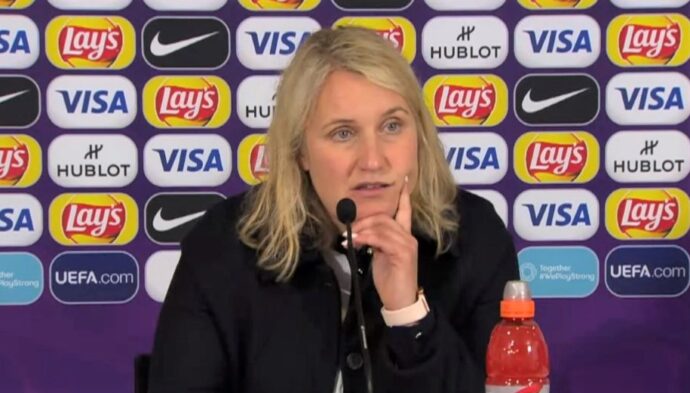 Chelsea Women are now coming to terms with being at the wrong end of the heaviest Champions League final defeat in history. One-nil down after half a minute in Gothenburg, they couldn’t contain a rampant, confident, bullish Barcelona side who settled instantly and turned in a majestic, dominant performance. The Blues seemed overawed by the

Chelsea Women are now coming to terms with being at the wrong end of the heaviest Champions League final defeat in history.

One-nil down after half a minute in Gothenburg, they couldn’t contain a rampant, confident, bullish Barcelona side who settled instantly and turned in a majestic, dominant performance. The Blues seemed overawed by the occasion – much to manager Emma Hayes’ mystification – and were simply blown away with four first-half goals.

Even with world player of the year Pernille Harder leading the line, and the Special K pairing of Sam Kerr and Fran Kirby either side of her, Chelsea never looked like threatening the Spanish goal. By half-time, the task of clawing back an overwhelming deficit looked well beyond their grasp.

The Blues will have to wait for another year for a tilt at Europe, despite this being trumpeted as Hayes’ best shot at winning the trophy she most craves; the likes of Lyon, PSG and Bayern having all been knocked out in earlier rounds.

Hayes, pictured above at the post-match press conference, lamented the fact that keeper Ann-Katrin Berger didn’t have a save to make… “yet we were 4-0 down”.

“It’s now about focusing on how we make that ground up [against teams such as Barcelona],” she said. “Some players – Naimh Charles, Jess Carter – haven’t played at this level before. I was really looking forward to the game, but some players haven’t played in an arena like this before, and it showed.
“We prepared as best we could, but if you give away a cheap goal and a penalty… this is a top side, and you can’t give them two goals that we gave them that. We’re disappointed in the result, but we gave everything in the second half, and showed the character we’ve got.
“We had the best warm-up we’ve had all season, but at 2-0 down it made the game very difficult. We had a great opportunity to score [through Harder], but we didn’t take it, then it’s 2-0, then 3-0.”

With captain Magda Eriksson playing in the Gothemburg stadium where Sweden Women play so many of their matches, this must have felt like a home game. But defensive frailties cost Chelsea dearly, and Barca (helped by a slice of luck for the first goal) were in cruise control throughout.

It was a chastening lesson, and there were plenty of tears at the end of Sunday night’s drubbing. All that’s left for Chelsea is the knowledge that they are the best team in England, having retained the Women’s Super League title, and lifted the League Cup as well. Europe will have to wait.

Chelsea, as a football club, are now facing the risk of making three finals in the space of a week and not winning any. The men lost the FA Cup final to Leicester on Saturday, the women stumbled in Sweden and now Chelsea’s men are underdogs as they face domestic champions Manchester City next weekend.

The damage was done in the opening seconds of the women’s final. Barca kicked off, scurried forward and when an initial shot from Lieke Martens riccocheted off the bar, confusion in the area gifted the Spaniards a freak goal. In trying to clear the ball, Kirby fired it against Mellie Leupolz at close range. It then looped over Berger. Kirby could have tried the same clearance 1,000 times and not had that outcome.

After a quarter of an hour it was 2-0 when a penalty was awarded after Leupolz extended her leg to clear the ball, and connected instead with the foot of a Barca attacker. Berger (usually impressive against spot kicks) dived, and the kick from captain Alexia flew straight down the middle, past her.

Twenty minutes gone and it was 3-0 to Barca as Aitane Bonmati scored with the pick of the goals. A neat move down the left, Jess Carter was floored but couldn’t block, and the ball flew home. 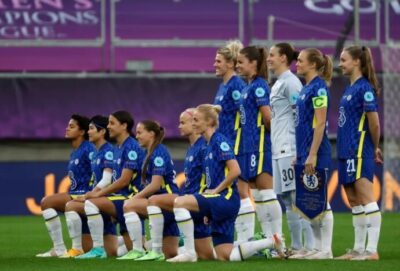 Shell-shocked, Chelsea (pictured, right, in bouyant mood before kick-off) couldn’t find a response, or impose on the game the kind of possession football that comes so naturally, and that they’re so used to playing, at Kingsmeadow.

Though the Blues had several half-chances – mainly falling to Harder – they never really looked like eating into the daunting hill they faced, and a simple tap-in from Caroline Graham Hansen put the dream out of reach well before half-time.

Yes, Chelsea kept the score at 4-0 through the second half, as Barcelona rotated the team to give as many players as possible a taste of the inevitable glory. But when Barca appeared to score a fifth at the Gamla Ullevi stadium – chalked off for offside – it was hardly a surprise.

Hayes tried to salvage something, but although Guro Reiten came on, followed by Beth England, it made no difference to Barcelona’s dominance.

“It was one of them games, when it just felt like everything fell to them. Those early goals took a lot out of the team, and I’m really proud of them for the second half. I asked them at half-time to treat the game as 0-0 regardless of the scoreline. To be 4-0 down when they had four chances… well, I don’t think I’ve seen that before.”

The tears flowed afterwards – there were a lot of bruised characters and a lot of emotions on display. “We didn’t defend our box well enough,” said Hayes, promising that the team would reach a new level to be able to compete with the likes of Barca in future.

The Spanish side had already shown Manchester City the door in the earlier round, so it was no surprise that they started the evening the favourites. But the rapidity and sheer number of the first-half goals just knocked the stuffing out of the Blues, and by the interval they were all wearing haunted looks.

Asked what the mood was in the dressing room at the end, Hayes said it was “the mood you’d expect of a team that’s not used to losing”. There has been (with a rogue outlier of a home defeat to Brighton) a sense of near invincibility at Kingsmeadow, with clinching the league title adding to that sense of strength.

But this was a humbling at the hands of a superior force. Barcelona, chastened by defeat in the final two years ago, were better in all departments, and another serious rebuilding job is needed in the summer for Chelsea.