Bring on the She Wolves 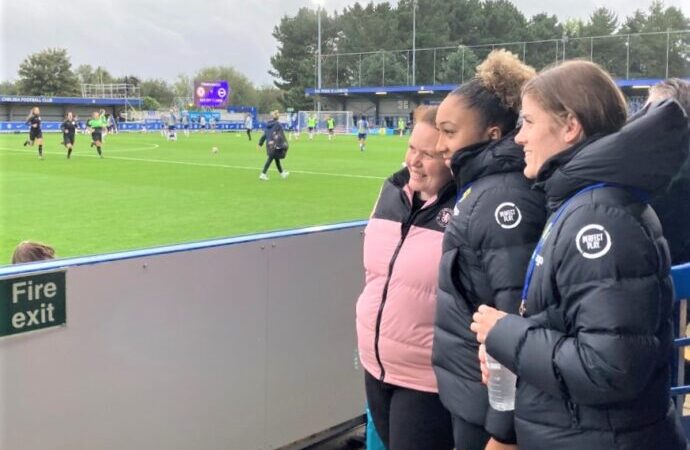 Posing for a selfie with a fan at the Chelsea v Brighton game are Lauren James and Maren Mjelde. “I’ll be back soon,” Mjelde told the supporter when asked about her return to fitness   Brighton were exactly the kind of challenging opposition Chelsea Women needed ahead of the all-important hosting of Wolfsburg in the

Posing for a selfie with a fan at the Chelsea v Brighton game are Lauren James and Maren Mjelde. “I’ll be back soon,” Mjelde told the supporter when asked about her return to fitness

Brighton were exactly the kind of challenging opposition Chelsea Women needed ahead of the all-important hosting of Wolfsburg in the Champions League under the floodlights in midweek.

The German team – for years a bogey team for the Blues – visit Kingsmeadow well aware of the Blues’ ability to exploit openings. The Wolfsburg backroom staff have been analysing Chelsea’s methods against Brighton and Birmingham in their most recent games, looking for any signs of weakness.

The only one manager Emma Hayes was prepared to concede after the Saturday morning 3-1 win against Brighton was a frustration that the game hadn’t been closed out more quickly.

“It should have done and dusted much sooner,” was her verdict, especially in light of the sluggish opening to the second half which allowed the Seagulls to claw a goal back and gain renewed confidence. “We were still in the changing room,” said Hayes.

She singled out Guro Reiten for deserved praise; the winger swiftly owning Chelsea’s left flank with a dazzling display of pace and crossing accuracy which was pivotal to the win. “She was exceptional today,” said Hayes. “She’s really taken to the wingback role, and she’s improving in all areas of her game. Defensively she’s got better… she had to.

“But I think, going forward, there aren’t too many left-footed players that have the ability to pick passes out like she does.” She also said she was a wonderful finisher, adding that there were few world-class left-sided players that are her equal.

Once again, Chelsea’s subs made a huge impact. Fresh legs of the quality of Jessie Fleming, Beth England, Niamh Charles and Jonna Andersson is the kind of luxury few WSL managers have (certainly Birmingham’s bench looked threadbare in the midweek cup match last week), and Hayes knows how to maximise their impact, usually bringing on two or three at a time to overwhelm the opposition.

“It’s the beauty of having so much quality,” said Hayes, adding that if opponents tried to shut down one particular player, there will always be another just behind to pick up the ball.

Of Brighton, Hayes said that Albion had “scored a goal from a throw-in that should never have happened”, but said that with that exception the Seagulls had been limited to two shots on goal by her “stingy” defensive unit. 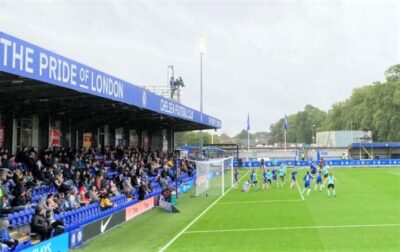 Brighton turned up the heat in the second half against Chelsea, especially from corners and throw-ins

Beth England’s introduction against Brighton with a quarter of an hour to go summed up Hayes’ headache in keeping all her forwards happy… an ache that will turn into a full-blown migraine once Lauren James is ready for the teamsheet.

Guro Reiten and Sam Kerr provided the other goals on Saturday, with Fran Kirby the assister in each case.

England’s penalty miss in the Birmingham game was put behind her by scoring Chelsea’s third after she’d only been on the Kingsmeadow pitch for three minutes. “If I could play all [my strikers] at once, it would be an ideal world,” said the Chelsea manager after the Brighton game. “But I can’t. What Beth brings to the team is goals.”

Hope Powell was “proud of the way we had a really good go” against Chelsea, admitting that the strength and depth of the home side’s squad was difficult to match.

She took heart from having “rattled” the Blues with the early second-half goal, but said: “Chelsea have a squad of international players, and every one we come up against is a big challenge for us.”

Chelsea v Wolfsburg kicks off at 8pm on Wednesday at Kingsmeadow.