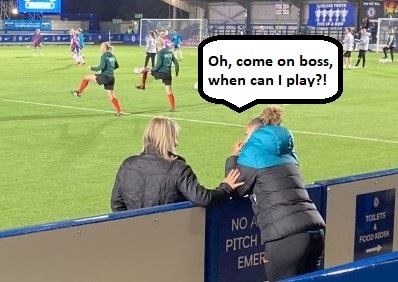 She’s avoiding me, joked Blues manager Emma Hayes as she chatted about Chelsea-mad striker Lauren James, her frustration at the slow start to her Kingsmeadow career… and her impending debut. Chelsea Women’s not-so-secret weapon is now ready to be unleashed, adding another up-front option to the gaffer’s armoury.   Protected and nurtured by the Blues’

She’s avoiding me, joked Blues manager Emma Hayes as she chatted about Chelsea-mad striker Lauren James, her frustration at the slow start to her Kingsmeadow career… and her impending debut.

Chelsea Women’s not-so-secret weapon is now ready to be unleashed, adding another up-front option to the gaffer’s armoury. 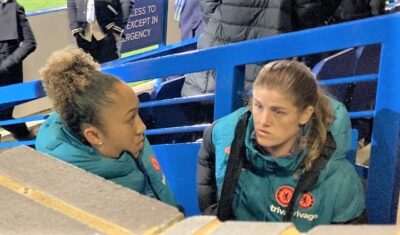 Lauren James and Maren Mjelde talk tactics. Both are now ready to play

Protected and nurtured by the Blues’ medical and backroom staff since signing from United in the summer, she will feature in one of three looming rapid-fire away games against Villa, Servette of Geneva, and (yet again) Man City.

James, 19, was named on the bench for the 3-0 FA Cup victory over City last weekend, to get her back into the matchday swing, and both she and Maren Mjelde, now fully training after her six-month knee injury recovery, are being eased back via academy games.

Pernille Harder pulled out of the City win with a flare-up of a knock picked up on international duty, meaning James was able to join the subs.

“I’m so happy for Lauren,” said Hayes, who explained the situation to the striker and asked her if she wanted to join the squad. “She said ‘Yes’, and drove home to get her kitbag,” added the manager. “I was never going to put her on… she still needs a little bit of time.”

James has been doing increased training in isolation, while Mjelde is further advanced and is expected to be named in the squad to travel to Aston Villa on Saturday lunchtime in the WSL.

James will be named on the bench as the team travel to Switzerland in midweek, and could even come on as a late sub to give her a few minutes’ match time.

“I’ve been cautious with Lauren to make sure the injuries she had prior to coming to this club don’t keep coming back. Fans might be a little impatient, but I think we’ve been taking the right decisions for Lauren. 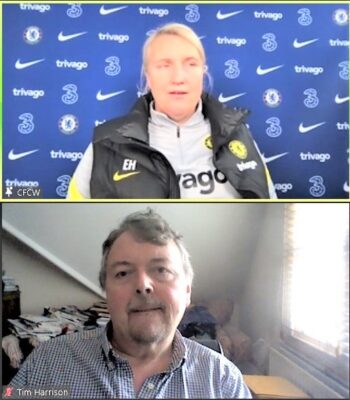 She’s almost there! Emma Hayes gives Tim Harrison the lowdown on Lauren James at her press conference via Zoom this week

“Lauren has abilities that are very special on the ball. She’s 19 and she’s going to be learning from the best players in the world… from Fran [Kirby], from Pernille.”

Hayes’ plan is to gradually introduce James into the team in a forward role, initially as a second-half sub.

“She hasn’t had a full pre-season behind her, and fans need to be patient, but she’s Chelsea-mad and we need to give her time to settle.”

Hayes agreed that Lauren James is itching to get going in a blue shirt, but trusts the precautions that have been taken. “She avoids me daily,” joked the manager!