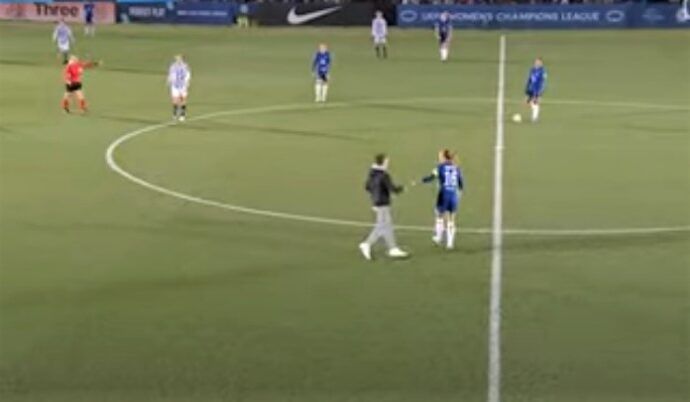 The pitch invader tries to get a selfie with Magda Eriksson    Picture: DAZN   An inquiry has been launched into a bizarre incident at Chelsea Women’s Kingsmeadow home, at the end of a frustrating Champions League night which finished goalless against Juventus. A yob ran on to the pitch with two minutes of normal

The pitch invader tries to get a selfie with Magda Eriksson    Picture: DAZN

An inquiry has been launched into a bizarre incident at Chelsea Women’s Kingsmeadow home, at the end of a frustrating Champions League night which finished goalless against Juventus.

A yob ran on to the pitch with two minutes of normal time remaining, and attempted to get a selfie with Blues captain Magda Eriksson, approaching her on the halfway line with his mobile phone held at arm’s length.

When, quite rightly, she refused and moved away, fiesty Aussie forward Sam Kerr intervened and shoved the intruder to the ground. She was immediately booked for her action by Swedish Uefa referee Sara Persson, though by the letter of the law there was a very real risk of Kerr being instantly red-carded for her exasperated show of force. 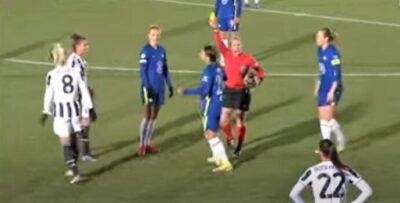 After proving to the world that she was a striker in every sense of the word, the Chelsea attacker was calmed down by teammates as stewards belatedly led the invader away. Her frustration stemmed from the fact that the Blues had hit the woodwork several times, been denied by ex-Arsenal goalie Pauline Peyraud-Magnin’s athletic saves and had actually got the ball into the Juventus net, only for the ‘goal’ to rightly be ruled out for offside.

While Chelsea FC’s official website account of the 0-0 draw makes no mention of the incident, it was all that fans could talk about as they made their way home on a very cold Wednesday night, and it may yet result in stern words from Uefa, which takes a very dim view of any pitch incursion that could, in theory, result in assaults on players or match officials. 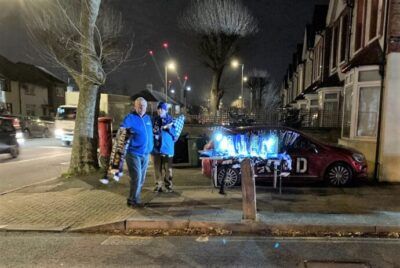 Chelsea are now reviewing perimeter security at the ground, but with a relatively shallow barrier between crowd and turf it seems difficult to see how anyone could have prevented a determined rogue from running on to the field of play in the dying moments of the match, when many stewards’ focus had switched to ensuring the safe emptying of the stadium. There is no history of pitch incursions in the women’s game.

“When someone runs on the pitch, players are understandably thinking about their welfare. I don’t know why he didn’t just wait to the end. He could have had a photograph if he really wanted one,” said manager Emma Hayes. “Jokes aside, you do have to think about player safety. With the growth in the game there’s a sense that the players are more in demand, so it should serve as a reminder to us all, and our stadiums and our stewards, that we have to put player protection first.” 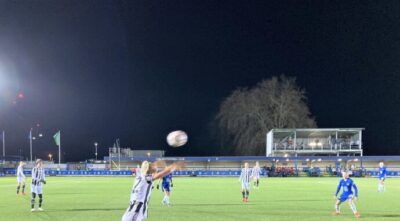 The club will liaise with Uefa to offer reassurances about upcoming fixtures at Kingsmeadow beyond the group stage, while the expectation is that Chelsea will move to prevent the invader from attending any future matches.

Chelsea still need a point from their away match at Wolfsburg on Thursday next week to guarantee progression.

Wednesday night’s game was a tale of frustration, with Juventus – managed by former Gunners’ boss Joe Montemurro – setting out to thwart and deny. “The game played out exactly as I thought it would so soon after the FA Cup final, and I’m extremely proud of the players,” said Hayes at the end. 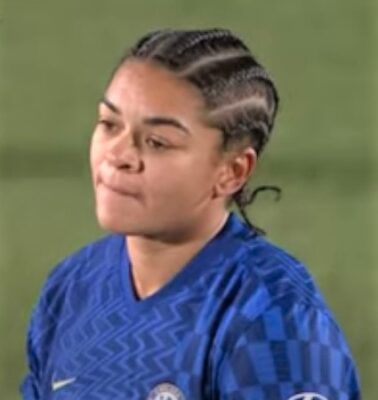 Jess Carter looks shocked by the turn of events on the pitch after a yob ran on. Pic: DAZN 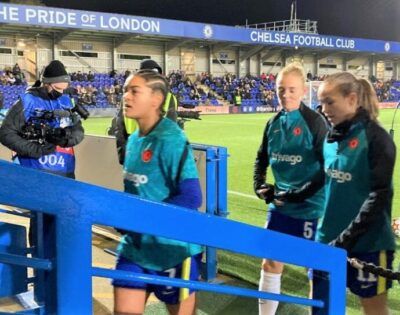 Jess Carter, Sophie Ingle and Guro Reiten all started for the Blues

Juventus whooped and celebrated on the pitch as if they’d just lifted the European trophy itself, and they had their keeper to thank for the clean sheet. Erin Cuthbert’s second-minute shot was palmed on to the bar, while a Kerr cross/shot was similarly dealt with 20 minutes later, and a Millie Bright piledriver was tipped over. Another Kerr effort, a header from a Fran Kirby cross, only just missed the target.

The second half saw more attacks, growing in fervour and desperation as the final whistle loomed. Kerr thought she had broken the deadlock in the 57th minute, but it was ruled offside.

It all felt a bit after-the-lady-mayor’s-show following Sunday’s ululations at Wembley, with Hayes admitting her front line looked understandably weary towards the end.

But the real fireworks were saved for the last moments. With three minutes to go, Peyraud-Magnin was booked for timewasting, then Kerr was booked for sending the pitch invader earthwards. Barbara Bonansea was yellow-carded, and immediately substituted, in stoppage time for booting Cuthbert instead of the ball, then Montemurro was booked on the touchline for dissent as discipline fell apart in the dying seconds.