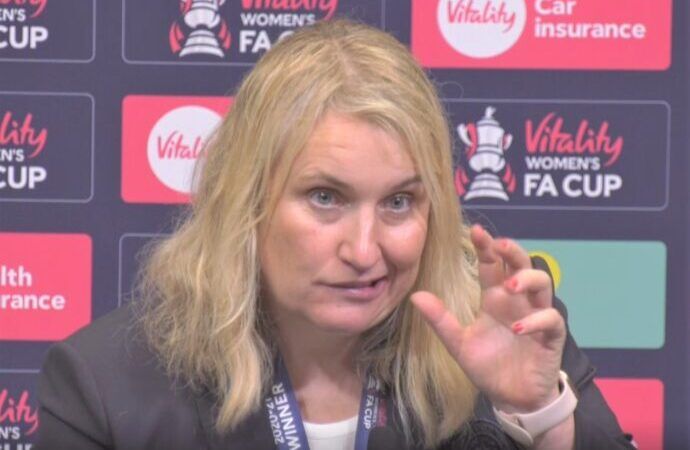 Five years after being made an MBE, Blues manager Emma Hayes has been elevated to OBE for services to football in the Queen’s 90th birthday honours. She’ll attend Buckingham Palace in the summer to receive her gong after completing a remarkable quadruple with Chelsea Women – the club she has managed for a decade –

Five years after being made an MBE, Blues manager Emma Hayes has been elevated to OBE for services to football in the Queen’s 90th birthday honours.

She’ll attend Buckingham Palace in the summer to receive her gong after completing a remarkable quadruple with Chelsea Women – the club she has managed for a decade – in the past season: WSL trophy, FA Cup, League Cup and Community Shield.

The reigning WSL manager of the season, she recently played along with the half-joking suggestion that she was just a pussycat at heart by snarling and baring her ‘claws’ at a press conference. Now the cat’s got the cream.

But although last season ended on both a high and a low, as Chelsea reached their first Champions League final only to be humiliated by Barcelona, this season has proved a far harder nut to crack. Despite arguably having the strongest, deepest squad in the Women’s Super League, Chelsea have struggled to assert themselves, with a string of poor results going into the winter break leaving the club out of Europe and floundering around instead of overhauling league leaders and arch rivals Arsenal.

For Hayes personally, the latest honour crowns a year in which she was inducted into the newly created FA WSL Hall of Fame (“I didn’t even know it existed,” laughed the Blues gaffer at the time), and has signed a new contract at Kingsmeadow. She has also emerged in 2021 as a knowledgeable and engaging TV pundit, initially during the delayed Euro 2020 tournament and more recently adding her analysis and insight to both men’s and women’s televised games.

“It was a huge shock to hear I had been awarded an OBE. It’s an unbelievable honour for me and my family and a privilege I take very seriously,” said Hayes. “I would like to thank everyone who has worked with me across my career. I am fortunate and extremely lucky to have represented a fantastic football club and an amazing group of people over these past 10 years.

“It’s been an unbelievable ride so far, transforming from an amateur outfit to one of the top five clubs in Europe and I hope we’ve helped to pave the way for future generations to come. I couldn’t have done it without the support, and I will be forever grateful to each and every one of them. A special big thanks to my mum and dad and wider family for their unwavering support throughout. This is for you.”

Chelsea’s chairman, Bruce Buck, said: “Since joining us over a decade ago, Emma has not only transformed the women’s team here at Chelsea but has also continued to pioneer the way for the women’s game and inspire young girls across the country.”