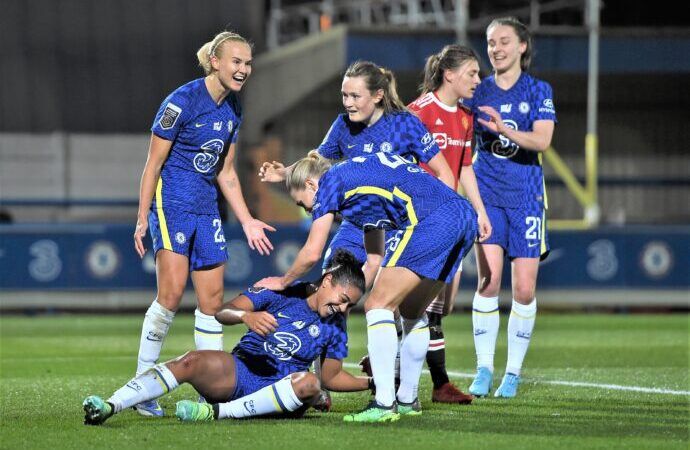 Jess Carter is congratulated by her team-mates on her goal as ex-Blue Hannah Blundell walks off disconsolately in the Conti Cup    Pic: Chelsea FC   Chelsea’s pace and grit knocked a threatening Man Utd women’s team out of the Conti Cup in an action-packed semi under the lights at Kingsmeadow, setting up a third

Jess Carter is congratulated by her team-mates on her goal as ex-Blue Hannah Blundell walks off disconsolately in the Conti Cup    Pic: Chelsea FC

Chelsea’s pace and grit knocked a threatening Man Utd women’s team out of the Conti Cup in an action-packed semi under the lights at Kingsmeadow, setting up a third consecutive League Cup final against either Spurs or Man City.

The 3-1 win, with all the goals coming in the first half, ended in the dramatic sending-off of United keeper Sophie Baggaley for upending striker Sam Kerr, who was running through on goal with 15 minutes remaining to claim what would have been the Blues’ fourth goal.

Pernille Harder, Jessie Fleming and Jess Carter were all on target for Chelsea, with Vilde Boe Risa firing a superb shot home in reply for the Reds.

“You know what, I knew it was coming,” said Blues gaffer Emma Hayes afterwards, praising players in all positions, from keeper Zecira Musovic to Guro Reiten, Sophie Ingle to Harder. “It was the togetherness of everything we did; the way we pressed, the way we sat in… it was such a dominant display from us.” 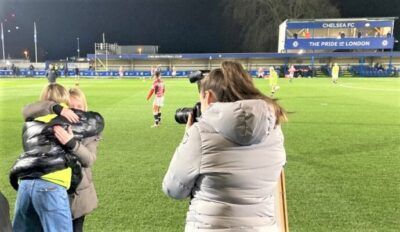 Ref Paul Howard had no alternative but to show United’s netminder a red card in the 77th minute when Kerr ran free, one-on-one. Baggaley came right out of her area to intercept, and clattered the Aussie striker to deny a real scoring opportunity. 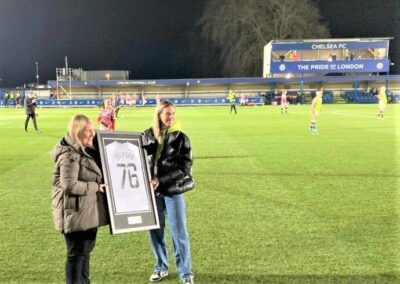 She was given a framed shirt by the Blues manager

Chelsea will now take their place in the final in early March at Wimbledon’s new ground.

With 1,548 in the ground, cheering the Blues on and waving flags given out ahead of kick-off, the atmosphere was terrific.

“I was singing on the bench with them,” laughed Hayes. “I think when you have that level of support it gives you a lift, but I thought tonight’s performance reminded me of Chelsea of old… the way we dominated them physically. We were aggressive everywhere, but our football’s getting better too.” 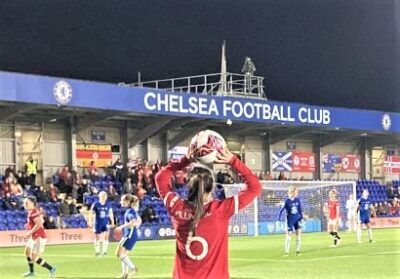 It was a disappointing return to Kingsmeadow for United’s ex-Blues Hannah Blundell and Maria Thorisdottir. Blundell was given a heroine’s return, with loud cheers from the home fans as well as repeated chanted reminders that the United No6 will “always be a Blue”.

United manager Marc Skinner said that the rules of the competition had to change for next season as his team had picked up several yellow cards in the earlier rounds of the cup, limiting his player choice, while Chelsea had entered the tournament at a later stage by dint of being in the Women’s Champions League final, and therefore hadn’t run the same risk of accumulating cards.