The title race in the Women’s Super League is still wide open after Chelsea and Arsenal played out a rare goalless draw at a chilly Kingsmeadow. The Friday night game – with 3,330 tickets constituting a sell-out for the ground – saw the sides cancel each other out, with the Gunners having the best of

The title race in the Women’s Super League is still wide open after Chelsea and Arsenal played out a rare goalless draw at a chilly Kingsmeadow.
The Friday night game – with 3,330 tickets constituting a sell-out for the ground – saw the sides cancel each other out, with the Gunners having the best of the first half, and the Blues edging it towards the end of the second.
A game billed as a title-decider was never going to quite live up to the hype… and so it proved, although it was a mesmerising tactical duel at times, and there were passionate shouts by Chelsea for a late penalty four minutes into the eight minutes of stoppage time that ref Becky Welch added at the end.
“Eight minutes?” screamed the crowd collectively in disbelief as the additional playing spell was announced, and the air temperature sank below zero. 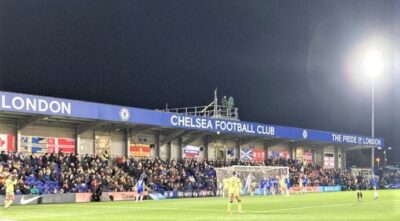 I don’t think I’ve ever made so few scribbled notes about a first half of football in any league, in any era, although the Gunners dominated the play and limited the Blues’ chances to virtually none.
But with Arsenal bossing the first 45 minutes, and Chelsea suffering the indignity of being unable to keep possession at home for long periods, the 0-0 half-time score seemed to suit the Kingsmeadow crowd.
“I thought a draw was fair; we struggled in the first half. We created more big chances in the second half, but the talking point will be the penalty that wasn’t given,” said Emma Hayes in the post-match press conference.
It felt like the seventh game in 21 days, she added. “The accumulation (of games) told for us. We weren’t free-flowing going forward, but we were rock-solid defensively.”
She said that race was still too close to call, with week-in, week-out football coming in spurts, followed by long, yawning gaps – the current curse of the women’s game, until a more consistent, regular pattern is established. “There will still be twists and turns [in the title race],” Hayes predicted.
She insisted that ‘the whole stadium’ thought it was a penalty when Leah Williamson handled the ball right at the end, but after the partisan crowd had booed and jeered the referee, Hayes defended Ms Welch as being one of the best in the sport. 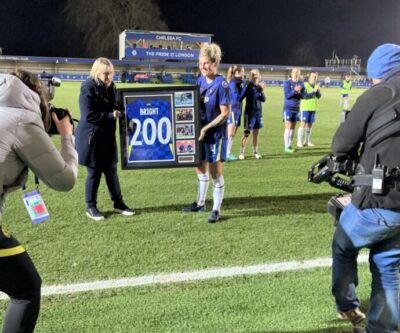 Before the game began, Blues manager Emma Hayes presented Millie Bright (captain on the night) with a framed commemoration to mark 200 appearances for Chelsea

Sub Jessie Fleming did manage to get the ball into the net, past Arsenal keeper Manuela Zinsberger, but it was ruled out for offside.
Erin Cuthbert ran her socks off for Chelsea, but picked up an injury and collapsed on the ground with 57 minutes played. She was subbed by Ji So-Yun, back from her Asian adventures. Later Hayes said that Cuthbert’s problem was a tight hamstring.
Hayes characterised the match as a good technical battle, and Arsenal came very close to breaking the deadlock in the dying seconds, with Millie Bright (presented with a framed shirt at the start of the match for making her 200th appearance for Chelsea) clearing off the line.
Arguably Arsenal had the closest chances overall. Viv Miedema struck the post in the first half, and there were several goalmouth melees involving desperate Chelsea clearances from inswinging corners.
Frustratingly, there is now a four-week break in league action, although Chelsea have an FA Cup tie and the Conti Cup final in the meantime… more than enough to keep fans’ busy.