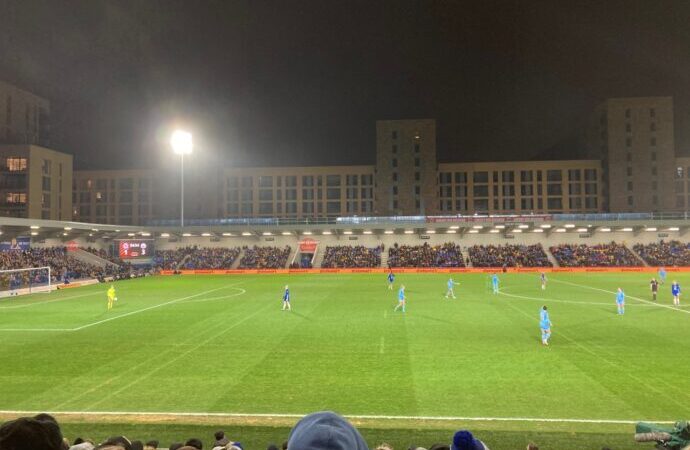 Eclipsed and outclassed, Chelsea Women had no answer to Manchester City’s grit and determination as the Sky Blues finally ended a long jinx and lifted the Conti Cup – denying Emma Hayes a third trophy on the trot. Player of the match Caroline Weir scored twice, while Ellen White was also on the scoresheet as

Eclipsed and outclassed, Chelsea Women had no answer to Manchester City’s grit and determination as the Sky Blues finally ended a long jinx and lifted the Conti Cup – denying Emma Hayes a third trophy on the trot.

Player of the match Caroline Weir scored twice, while Ellen White was also on the scoresheet as City swept Chelsea away in an utterly dominant second-half display.

Full credit to manager Gareth Taylor for turning round a 1-0 half-time deficit after Sam Kerr had spun round and slotted the ball past Ellie Roebuck in the 34th minute to give the locals the lead.

He masterminded an unstoppable series of attacks after the break that left Chelsea playing catch-up in a cup final at Wimbledon’s new ground, in front of pretty much a full house on a bobbly pitch which Hayes had criticised ahead of kick-off.

Four minutes after the restart, City were level through Weir, whose touches were sublime and whose energy and skills surpassed anything Chelsea could offer. To be fair to the Blues, they were down to 10 players at the time as Niamh Charles had clattered into the photographers at the side of the pitch, and was being treated by medics.

Indeed, the Blues looked leaden-footed, uncoordinated and simply sluggish in attack as City turned the screw, took the lead through White in the 58th minute… and never looked back.

Weir’s second, and City’s third, scored with gusto into the top corner with more than 20 minutes remaining, should have triggered some kind of a response from Chelsea, but none materialised, despite multiple substitutions from a disheartened Hayes, pacing her technical area. 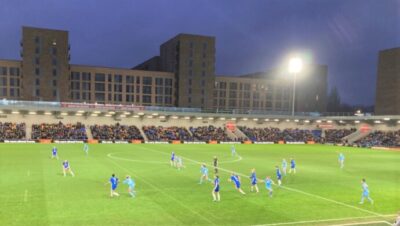 The goal that killed off the game came from a Georgia Stanway corner, headed back into the danger zone by Lucy Bronze and ineffectively cleared by Sophie Ingle. The advancing Weir waited for her moment, then raced into the box to volley home as Ann-Katrin Berger stood rooted to the spot.

Stanway also supplied the pass that allowed Weir to level for City, again with that magic left boot, while White’s goal owed much to Lauren Hemp’s mazy run… and Berger’s hesitant goalkeeping.

City finally dispelled the hoodoo of Chelsea and – on this form – can build again to be a dominant force in women’s football in England after a poor start to the season.

Chelsea need to face up to some serious questions, not least about Berger’s reliability which was shown up by Hemp (switching wings and being just as effective on both without the absent Erin Cuthbert to hassle and harry her), the wholehearted Stanway, White and Hayley Raso.

Chelsea began the game as favourites, having pipped City three times already this season. But in the cold evening air, as a continuous misty rain swept the Cherry Red Records stadium, it was the Blues that lacked the pace, resolve and pressing that City produced in abundance.

“First half we struggled a little bit, but second half we upped the intensity and got an early goal, which helped,” said Weir afterwards.

England manager Sarina Wiegman, watching from the stands, would have found little to excite her among her Chelsea internationals, with Millie Bright simply off the boil and Jess Carter caught out by superior attackers. Only Niamh Charles provided positives.

But on the City side, every English player excelled. It felt as if City had been saving up all their energies for the breathless second half of cup-final football to which the Blues had no answer.

Hayes has to somehow refocus and lift her side as they travel to West Ham, then host Villa, in the coming week, with the Women’s Super League finally back on the agenda. “We didn’t keep the ball well enough,” admitted Hayes afterwards. “The best team won the game over 90 minutes, and I have never seen us concede as poorly as we did.”

She said that Chelsea looked tired in the second half. “I don’t think we did enough in possession, but I think [City] are worthy winners,” she said, adding that her team had missed the experience of injured and ill absentees including Fran Kirby (unwell), Jessie Fleming (Covid), Maren Mjelde (still recovering from the knee injury sustained in last year’s Conti Cup final), Magda Eriksson (just returning to fitness), Erin Cuthbert (injured) and Melanie Leupolz (injured).

But with the depth of squad that Chelsea possess, there can be no excuse for a lame second-half show, with the Blues well short of pace and seemingly bereft of ideas to get back into the game.

Her City counterpart Taylor thought his team had been “magnificent” – and few in the 8,000-strong crowd would have disagreed.