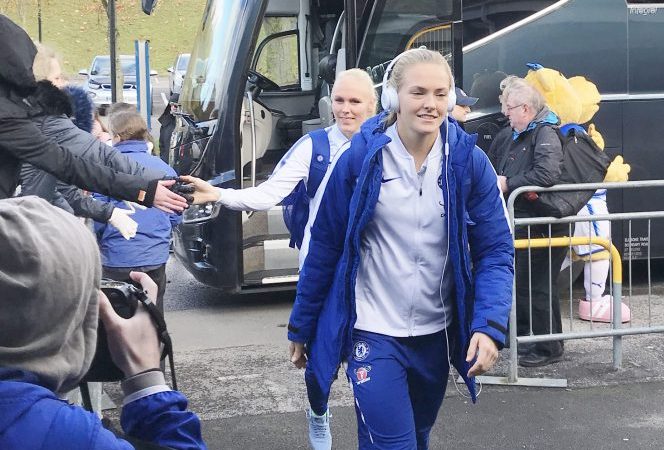 A mistimed header from a player who has been one of the most consistent performers of the season proved that Chelsea Ladies are human after all. Spare a thought for Magda Eriksson, part of the three-woman defence who had – until the weekend’s foray to play Reading – been pivotal in maintaining clean sheets for

A mistimed header from a player who has been one of the most consistent performers of the season proved that Chelsea Ladies are human after all.
Spare a thought for Magda Eriksson, part of the three-woman defence who had – until the weekend’s foray to play Reading – been pivotal in maintaining clean sheets for 400 minutes of Super League football.
She arrived, bopping into the changing rooms from the team coach to Abba on her headphones, withstood the onslaught from a team who fought like tigers for every ball, made a crucial goal-line clearance with moments to go, which would have handed the Blues three points that they might have struggled to justify… and then tried to head the last free kick to safety in stoppage time, only to see the ball fly past her own keeper and close pal Hedvig Lindahl in the Chelsea goal.
It was cruel on the 24-year-old Swede, and it meant Reading gained a point in a 2-2 draw which pushed the Blues down the table behind Manchester City.
The left back was practically in tears as she was comforted by her teammates when she crumpled on to the ground after the own goal, but manager Emma Hayes was one of the first to wrap a comforting arm around her at the end, and insisted on putting a positive spin on the result.
Some at Wycombe’s Adams Park ground wondered if Chelsea’s minds had started straying towards Wednesday night’s second leg of the Champions League in Malmo; with the team flying out to Sweden on Tuesday morning.
But that would be unfair on Magda, and on the team. In the last frantic moments of Sunday lunchtime’s match, there was no time to think of anything except keeping out a determined Reading team.
It was just one of those strokes of bad fortune that sometimes happens. There’s never a good time to score an own goal, but for it to occur in second-half stoppage time to halt an extraordinary run of form is enough to make anyone cry.
Either way, Hayes was upbeat, praising Karen Carney and Eni Aluko for the goals which helped the Blues come from behind against a surprisingly strong side.
“I’m not disappointed with my team; I’m very proud of them,” said Emma at the final whistle. “We’re still unbeaten domestically.”
Lindahl said afterwards: “I think we all felt that we played quite well the second half against Reading, and we actually won that half 2-1, even though we were unfortunate with an own goal in the last minute.
“We knew that Reading were going to be tough opponents and playing against them away is not an easy challenge, and all things considered, and the unfortunate own goal, we still think we managed to come away from the game with the upper hand at least, even though we didn’t get all the points. We managed to come away from the game with quite a good feeling still.
“We also knew this week was going to be challenging with first Rosengard, then Reading, then Rosengard again, so it’s just a quick turnaround and then we go again.”
The result does mean, however, that the pressure will be even more intense on Sunday December 10 when Manchester City visit Kingsmeadow.
But first things first. The second leg of the Rosengard match beckons.
Lindahl said of the impending game: “We have already done a lot of preparation, but we might change some tactics after we played them [the first time].
“Sometimes it’s really good to have the away game in the town you’re going to be in [Malmo] the day before, and you’re really focused on that. It’s about staying professional.
“We’ll be talking about this as a new game; 90 new minutes.
“Letting in two goals at the weekend is not something we’re particularly happy with… we like our clean sheets, but there’s no reason for us to be afraid.”
Details of future Chelsea Ladies matches at www.chelseafc.com

Featured: Magda Eriksson was all smiles before the Reading game, but was practically in tears afterwards
Picture: Paul Lagan