Emma is what we aspire to! 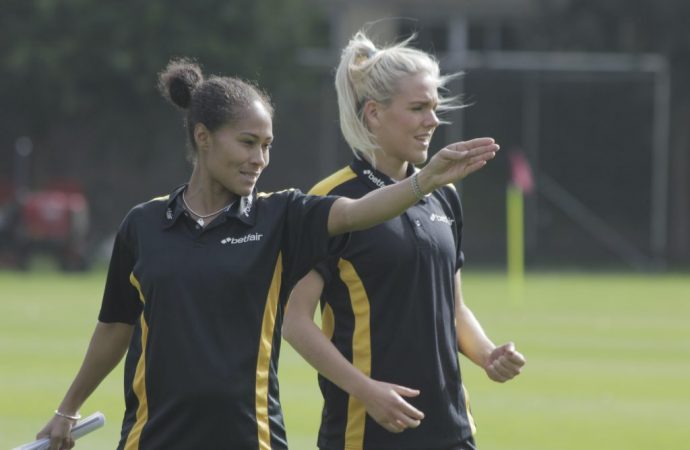 If more women used Emma Hayes as a role model, there’d be a lot more female managers in football. That’s the assertion of England’s most-capped player, Rachel Yankey, the public face of a drive to increase the number of women gaining professional coaching badges. “Emma’s a really good friend of mine,” said Rachel, 38, whose

Her words follow Chelsea Ladies’ 4-0 aggregate victory over Swedish side Rosengard, with the second leg a 1-0 win in Malmo. Two clean sheets in the Women’s Champions League underline Emma Hayes’ determination to build on defensive strength.
“I played for her, and I’ve seen her grow as a coach; what she’s doing for Chelsea Ladies is fantastic,” said Rachel.
Rachel worked under Emma at Arsenal, when Hayes was first team assistant coach to Vic Akers between 2006 and 2008.
“She was the assistant coach in 2007 when we won the quadruple,” said Rachel. “More people need to look at Emma; she’s a great role model, and she’s really brought Chelsea Ladies up to a standard better than it’s ever been before. There was a time when Chelsea wasn’t a name you feared!”
Rachel is the public face of bookie Betfair’s Fairer Game campaign, to push for greater equality for female football coaches by funding 50 women to undergo their Uefa B training.
“The cost of doing the training course can be a barrier, and that makes it so important that Betfair is footing the bill, and then helping the coaches via their Cash4Clubs scheme.”
Rachel’s plea for a more even-handed attitude is based on the stark fact that just 310 women in Britain have their Uefa B badges, compared to more than 10,000 men.
“You have to have teams willing to experiment [with female coaches], and give more women a chance,” she said. “But it’s also about educating females who should have the confidence to go out and do this.”
Rachel is against quotas, arguing that women “have to be good enough” to be taken on.
But the huge imbalance in numbers is something that has to be addressed, she believes.
The Hammersmith-based online gambling giant, now the largest betting exchange in the world, is putting £50,000 into training 50 new female coaches – an initiative which Rachel thinks has ever prospect of success. “We might find a couple of gems out there,” she said.
Interestingly, the Uefa coaching badges – both B and A – are non gender specific, so there has never been any official barrier to women taking up management positions… only a huge cultural and traditional hurdle to vault.
Rachel Yankey is, in many ways, the perfect choice as an ambassador for a campaign aiming to break down gender prejudice.
When she started playing football at the age of eight, she shaved off her hair to pass as a boy, and continued for two years in a boys’ team before she was rumbled!
This week Rachel gave a speech in parliament about the scheme and efforts to counter gender imbalances at the highest level of the sport.
Rachel already holds a Uefa B coaching badge herself, and is training for her A licence, adding: “Both representation and access for women in football has improved in recent years but it’s still not a level playing field.”

To follow the women on their Betfair Fairer Game journey, visit http://fairergame.com/