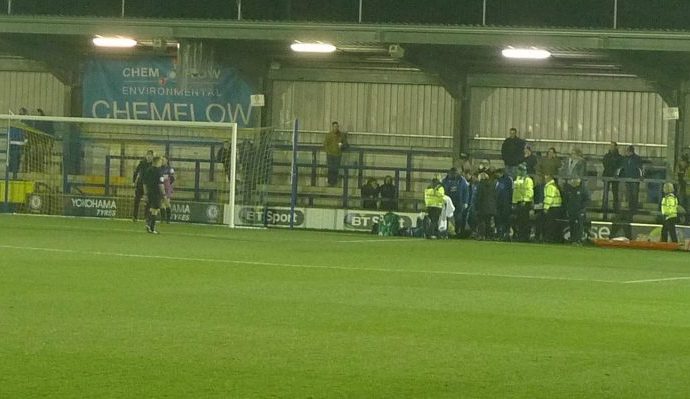 A goalfest against Yeovil Town at Kingsmeadow, as Chelsea Ladies continue to push for a quarter-final place in the Conti Cup, was overshadowed by a nasty injury to striker Eni Aluko. With 23 minutes played, and the score at 2-0 thanks to a fine shot from Crystal Dunn (teed up by Aluko) and an own

A goalfest against Yeovil Town at Kingsmeadow, as Chelsea Ladies continue to push for a quarter-final place in the Conti Cup, was overshadowed by a nasty injury to striker Eni Aluko.

With 23 minutes played, and the score at 2-0 thanks to a fine shot from Crystal Dunn (teed up by Aluko) and an own goal by Yeovil’s Nicola Cousins, Aluko thudded into the advertising hoardings at the Chemflow end after an accidental collision with Cousins as both followed the path of a lobbed ball into the area.

The sickening thump as the wholeheartedly committed No9 bravely hurled herself towards the ball echoed around the ground on a frosty evening.

The match was suspended for 11 minutes as medical treatment was given on the edge of the pitch before – to a huge ovation from both sets of fans – Aluko was stretchered off, assessed in the recovery room at the ground, then taken by ambulance to Kingston Hospital, two minutes away, for precautionary checks.

“She’s OK; she was sitting up and talking in the treatment room, but she’s been taken to Kingston Hospital as a precaution as it was a head injury,” a club spokeswoman told journalists as the 1,289-strong crowd anxiously waited for news.

With the outer boundary so close to the pitch at Kingsmeadow, and the advertising boards held rigidly in place by permanent scaffolding frames, there is no ‘give’ if a player runs full-pelt into the surrounds.

The players from both sides continued to keep warm in the centre circle with passing practice until the stretcher team lifted Aluko towards the exit, then they gathered round to wish her well in an emotional display of togetherness.

Fran Kirby, fresh from international duty, came on as a like-for-like sub, and the first half ended with the startling display by the fourth official of the board showing a minimum of 13 minutes extra play.

Erin Cuthbert made it 3-0, three minutes into the extra period, volleying home, unmarked, from eight yards out.

But the strangest honour goes to Drew Spence, who can claim to be one of the few people on the planet to score in the 13th minute of stoppage time, bundling in a fourth goal for Chelsea.

After the restart, Cuthbert was in the right place at the right time to add a fifth in the 59th minute, slotting past Yeovil keeper and captain Megan Walsh as she advanced to narrow the angle.

When So-Yun Ji was felled in the area after 72 minutes, Kirby stepped up – as she had done for England – to bury the penalty kick in the corner of the goal, atoning for Gemma Davison’s penalty miss 10 minutes earlier after she had been unfairly brought down.

At 6-0 – a familiar scoreline for Chelsea Ladies – it looked like everyone was coasting to the final whistle.

But with legs tiring, Gemma Davison made it 7-0 at the end of normal time, while Spence added an eighth in the dying seconds.

Spurs are the next visitors, also in the Continental Tyres Cup, on Wednesday evening, 7pm. Tickets available via http://www.chelseafc.com/teams/chelsea-ladies/ticket-information.html