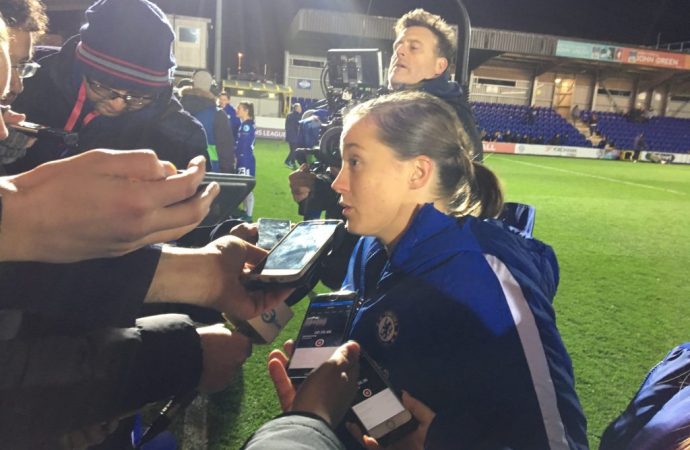 She may have won the double three years ago but captain Katie Chapman thinks this is the best Chelsea side she’s ever played in as the west London club prepare to take on rivals Arsenal this weekend. The Blues are unbeaten in the FA Women’s Super League and are into the final four of the

She may have won the double three years ago but captain Katie Chapman thinks this is the best Chelsea side she’s ever played in as the west London club prepare to take on rivals Arsenal this weekend.

The Blues are unbeaten in the FA Women’s Super League and are into the final four of the SSE Women’s FA Cup.

Chapman’s side also made history this week by making the semi-finals of the Champions League for the very first time as they beat Montpellier 5-1 over two legs.

The 35-year-old helped Chelsea to a league and cup double three years ago, but now thinks Emma Hayes’ current squad surpasses that 2015 vintage side.

“I think with the quality we’ve got going forward and the pride we have in our defending and not conceding. The key word is that we are a team,” she said.

“We have a great bunch of individuals here and a great bunch of staff here that push us to be our best every single day and I think it’s important that we all want to go in the same direction and that makes us special.

“It’s exciting to be at this club. I love this club and I love this team and I think right now we’re in a really good place. We’re looking positive and confident.”

Chelsea face a congested run-in on three fronts, but first up is Continental Tyres Cup winners Arsenal at Meadow Park. Chapman won two FA WSL titles in 2011 and 2012 and claims Chelsea must focus on themselves to preserve their unbeaten league run.

She said: “It’s a matter of focusing and recovering and getting our tactics right for the next game to go again. We’ve done well so far and we’ll keeping pushing ourselves. We have to stay positive, be resilient in this period and know it’s not forever. If we get through this then we’re looking good going forward.

“Arsenal are always tough opponents. Even when you just say Arsenal you know in the women’s game that it carries success. I think we just need to focus on us and that we go into that game focusing on what we need to do and hopefully get the right outcome from that.”

With Chelsea still battling for a possible treble, matches have been coming thick and fast for the London side. But Chapman is proud of the way her teammates have thrived in each match and hailed Chelsea’s mental toughness.

“It’s tough and recovery has been the key part to it,” Chapman said. “We do what we can to be in the best place we can be. We’re of the mindset that we are mentally strong and have get ourselves through this period because this period is really important for us as a club.

“I love playing in the big games and the team Emma has built is fantastic and we’ve seen it progress. We’ve got to a point where we all want the same thing. The different nationalities and cultures has made us a great team.”