Magda to the rescue 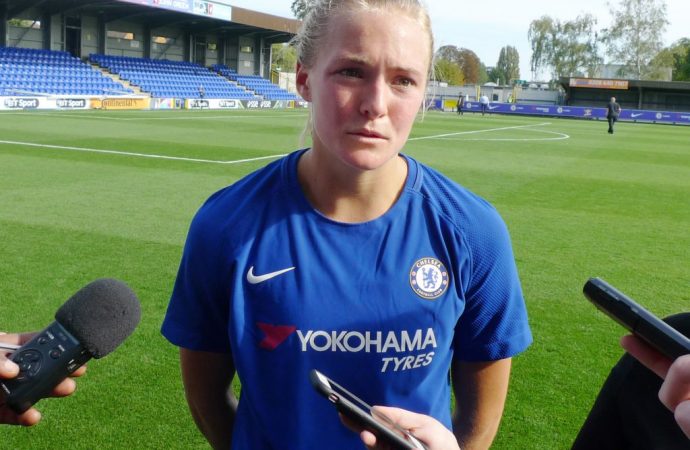 Magda Eriksson rode to the rescue at Rossett Park when Chelsea Ladies made the trek to Everton on Wednesday night ahead of Sunday’s crucial first-leg Champions League game against Wolfsburg. The 24-year-old Swede, capped more than 30 times for her country, may nominally be a defender, but she also loves getting forward when the game

Magda Eriksson rode to the rescue at Rossett Park when Chelsea Ladies made the trek to Everton on Wednesday night ahead of Sunday’s crucial first-leg Champions League game against Wolfsburg.

The 24-year-old Swede, capped more than 30 times for her country, may nominally be a defender, but she also loves getting forward when the game allows, and is also one of the Blues’ most dependable corner takers.

With four changes from the side which won in the FA Cup semi final against Manchester City, Chelsea showed little evidence of resting on their laurels ahead of their forthcoming sequence of huge games.

Magda, above, fired in the only goal of the game as Chelsea carefully shepherded the match to its conclusion, although Angharad James came agonisingly close to a late equaliser for the Toffees when she hit the crossbar.

Eriksson’s goal, a glancing header, came in the 12th minute, so it ended up a display of doughy preservation and determination. Carly Telford took a turn in goal for the Blues, suggesting Hedvig Lindahl will be between the sticks on Sunday.

Among other changes, Gilly Flaherty started, as did Ramona Bachmann – up from her sickbed, and Eni Aluko.

The hosts were looking to bounce back from their injury time defeat to Arsenal in the semi-finals of the FA Women’s Cup, but they got off to the worst possible start when Bachmann’s left-wing free kick was met by a near post header from Eriksson.

She then made a valuable contribution at the other end, blocking a goal bound effort from Courtney Sweetman-Kirk. By the end of the match there was little doubt about the woman of the match.

That was as good as it got for Everton, who were further inconvenienced when defender Georgia Brougham limped off with a knee injury.

Chelsea finished the half strongly with Aluko beginning to assert her authority and it was the England international who almost doubled the visitor’s lead when her strong shot was beaten away by an acrobatic Kirstie Levell.

After the break, Chelsea continued to press for a second with Millie Bright hitting the side netting following a deep cross from Jonna Andersson, and Fran Kirby going close with an effort from the edge of the box.

At the other end Sweetman-Kirk threatened with a sharp turn and shot and Danielle Turner was a constant menace down the left.

However, it took until the 87th minute for the hosts to carve out a clear opportunity when James’ delightful chip cannoned off the bar leaving Chelsea’s back three to celebrate a confidence-boosting clean sheet.

Everton’s Angharad James said: “We are massively disappointed with that result and I think we could have got at them a bit more.

“We played into their hands because we kept hitting it long but when we got it down and played we looked good and we should have done that more.

“They are very good in the air – there are four or five of them who can get on the end of crosses but we will go back to the training ground and work on our set piece defending.

“We’d put the Arsenal game behind us by Sunday evening and that’s what you’ve got to do. The games come thick and fast so you have to move on quickly and we were looking to bounce back tonight.”

Eriksson said: “I’m so happy to score because it doesn’t happen often and it was a really important goal because it gave us some security and allowed us to play for that result.

“I used to stay behind after practice when I was younger and train on set pieces so it’s paying off now, which is good.

“It was super important to get that early goal but we can’t relax. We knew it would be a tough game and be hard to play the way we wanted to play and that was what we prepared for.

“I thought we did well to keep them out of the box and most of the chances they had were from long distance – hopefully we can continue with this good defence.

“It shows what a good squad we have that we can rotate and then come away and get a good win like this.”

Of the impending Champions League involvement, Eriksson added: “We are taking one game at a time and that’s the strategy which ensures you win the league. We couldn’t think about Wolfsburg – we had to think about this game and that’s how we will play for the rest of the season.

“It will be a tight finish – there are a lot of teams in it and it will be difficult but if we keep playing like this we will have a good chance.

“Sunderland made it tough for us last time but once we scored we broke them down so we will look for that early goal.”

To buy tickets to an FA Women’s Super League match near you click here: www.fawsl.com/tickets