It’s over to you, Paul 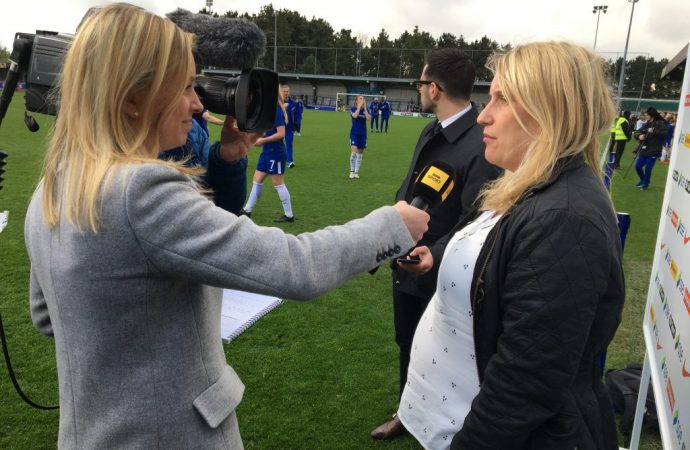 Emma Hayes, pictured right, will leave the honour of leading Chelsea Ladies out at Wembley to face Arsenal in the Women's FA Cup final to her deputy Paul Green as the game comes just a few weeks before she is due to produce twins. Paul, who has been at the club for five years and

Emma Hayes, pictured right, will leave the honour of leading Chelsea Ladies out at Wembley to face Arsenal in the Women’s FA Cup final to her deputy Paul Green as the game comes just a few weeks before she is due to produce twins.

Paul, who has been at the club for five years and is approaching his 42nd birthday, will escort the team on to the hallowed turf.

He was also expected to have been in the dug-out at Wolfsburg, as Chelsea faced the daunting task of overturning a 3-1 deficit from the first leg at Kingsmeadow, but Hayes felt up to the trip.

“[Wolfsburg] are a quality team,” she said after the home leg’s disappointment. “I said before the game they have players who will finish you off if you give them the opportunity.”

While Chelsea made the perfect start in that match, with Ji So-Yun scoring in two minutes, the cumulative tiredness of so many fixtures in such a short spell began to tell.

“You saw our energy levels deplete as the game went on. That’s our third game in a week and it shows how difficult it is when you play the top teams,” she said. “You’ve got to match them physically, and I thought we struggled all night. We’ve lost a couple of players to injury and suspension and that showed; without a settled team, that was a big difference for large parts of the game.

“It was always going to be a tough ask, but I’m proud of us to get to this level and I think the girls are disappointed because they know we are better than that. We’re closer to Wolfsburg and I don’t think the outcome is a true reflection of where we are as a team. But that’s the reality of being successful and competing on all fronts – you’re going to lose players and accumulate fatigue.”

“We’ve had an outstanding season, it was maybe a stretch too far tonight, but we’ll go on into the second leg giving it everything. We’ll go out there and do our best to turn the tie around. Don’t write us off – anything can happen in football!”

Fans’ next chance to see Chelsea Ladies at home in this thrilling season comes at 6pm on Saturday May 12, when Sunderland visit in the league. That’s a week after the date at Wembley with Arsenal for the Women’s FA Cup final.

Details of tickets for the Sunderland home game and Wembley can be found at: http://www.chelseafc.com/teams/chelsea-ladies/ticket-information.html