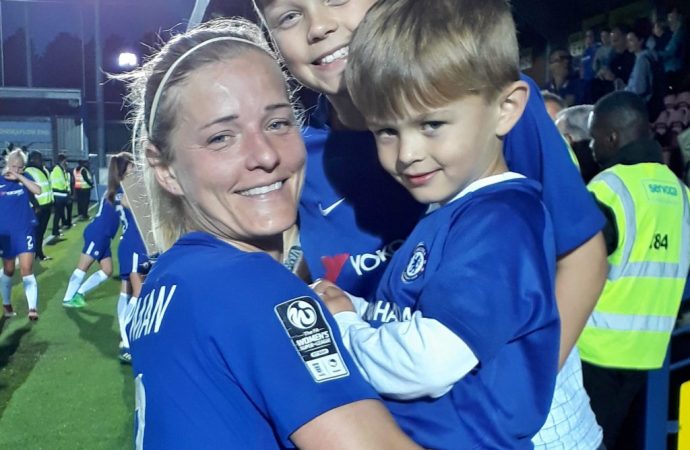 A late late winner from Erin Cuthbert earned Chelsea three vital points against Birmingham at Kingsmeadow as they continue their quest for a league and cup double… and the delight on the faces of club captain Katie Chapman and sons Riley, 9, and Zachary, 4, is plain to see! Birmingham had almost secured a point

A late late winner from Erin Cuthbert earned Chelsea three vital points against Birmingham at Kingsmeadow as they continue their quest for a league and cup double… and the delight on the faces of club captain Katie Chapman and sons Riley, 9, and Zachary, 4, is plain to see!

But as the game entered stoppage time, Cuthbert pounced to ensure Chelsea jumped to top spot after their SSE Women’s FA Cup heroics at Wembley on Saturday.

In front of a sparse, but vocal, crowd of 934, Chelsea nearly took the lead on 10 minutes when Jonna Andersson shot straight at Ann-Katrin Berger.

Just after the hour mark, Birmingham equalised. Jess Carter skipped through the Chelsea defence before crossing to Ladd, who took a touch before volleying past Lindahl.

In added time, substitute Cuthbert scored the winning goal after great build-up play from Andersson and Kirby down the right flank, slotting home to earn a crucial three points.

Match-winner Erin Cuthbert was thrilled after the game. “I’m absolutely ecstatic – we’re all ecstatic,” she said. “We really needed that after the cup win; it was a really tough game and Birmingham are a really tough team.

“When you are going for the title you can’t win pretty all the time, you have to get results like that and we did tonight. With the goal, I had a lot of time and sometimes that can work against you, but I saw the keeper dive and she made up my decision for me, and I just placed it through her legs.”

Chapman, giving two of her young lads a celebratory hug after the game, added: “It was quite a swift turnaround [after the weekend’s joy in the Women’s FA Cup] but you have just got to get on with it, when you have a league title to win.

“Tonight’s performance was tight, but we got the result we wanted. We’ve got to recover now and look forward to Saturday against Sunderland and the remaining games ahead.”

Birmingham captain Kerys Harrop said: “We are really disappointed with that. I think our second-half display warranted at least a point to get something out of the game.”

Chelsea are at home again on Saturday as they welcome Sunderland to Kingsmeadow.

Cuthbert added: “We’re approaching every game as it comes. We’ll be looking to get another three points against Sunderland and to keep our top spot.

“We know that we’ve got more than enough quality in this team to win any game we play, but we are just taking each game as it comes and focusing on one game at a time. Sunderland will pose a different problem to Birmingham but we have enough to get all three points.

“I would obviously love to be playing each week and help contribute to the team’s success, but tonight Emma (Hayes) gave me that opportunity and I felt like I took it.

“The most important thing at the moment is the team winning the title, whether that’s with or without me that’s the main thing but I feel like I contributed a lot tonight.”