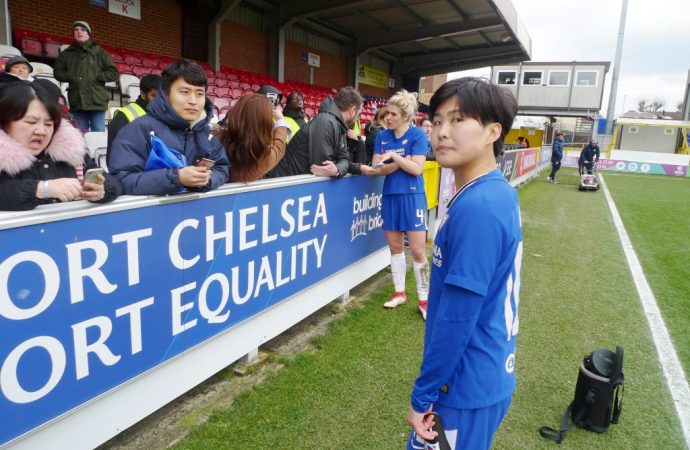 They’ve done it! Chelsea Ladies will go down in history as one of the great invincible teams – getting through an entire league season without defeat. At Prenton Park, on the final day of a glorious title-winning campaign, they came back from the dead in one of the turnarounds of recent years. Losing 2-0 to

They’ve done it! Chelsea Ladies will go down in history as one of the great invincible teams – getting through an entire league season without defeat.

At Prenton Park, on the final day of a glorious title-winning campaign, they came back from the dead in one of the turnarounds of recent years.

Losing 2-0 to Liverpool Ladies at half-time, and still losing 2-0 with 20 minutes of the match remaining, striker Eni Aluko, playing her last game for the Blues, conjured up a goal to give the visitors hope.

Then sub Ji So-Yun, pictured above, scored twice in three minutes to underline Chelsea Ladies’ sheer class and pedigree, crushing the fight out of Liverpool and capping a remarkable run of matches.

Chelsea Ladies may have sealed their second WSL championship in midweek at Bristol, but their unbeaten record had looked under threat after early goals from Jess Clarke and Niamh Charles.

It was after the champions had pulled a goal back on 70 minutes, Aluko latching on to a lofted through ball and calmly stroking home past Siobhan Chamberlain, that hopes of invincibility were reignited.

That cool finish was Chelsea’s 100th goal this season, before sub Ji added numbers 101 and 102 – the first an 18-yard volley, the second a curler from an acute angle following (as has so often been the case) unselfish work from Kirby.

“Credit to Chelsea, there is a reason why they are champions, but I think we gave them a run for their money today,” said Liverpool’s Jess Clarke at the final whistle.

Aluko said: “We’ve come back from 2-0 already this season, so we knew we could do it. We started slowly, we looked like we were still on the bus, we had to maintain our high standards, and we did.

“Getting the first goal was very important for me, because it set the team momentum, and then Ji came on and did what she always does – produces magic.

“It was an emotional day for me, but I needed to make sure I ended on a high with my own personal performance. I was pleased with that, I worked hard to create chances for the team and myself.

“Playing with Ji and Fran helps so much, they are two of the best players I’ve ever played with. This team is filled with character and we make sure to set our standards high.

“We were annoyed to be down at half time, despite coming into it as champions. But that is a sign of humble team that is always pushing to win.

“We are pleased with a great season, and ending with a win today, but we want to do this again next season, and even better. It is very difficult in men’s and women’s football to win back to back titles, we saw that in 2016 after the 2015 double.

“The management will look to recruit in the summer to make us competitive in the league, and in Europe.

“I’m sure this team will go from strength to strength, and keep our feet on the ground.

“When you look at Lyon or Wolfsburg, they do it year on year, that is the level we need to try to get to.”

To buy tickets to an FA Women’s Super League match near you click here: www.fawsl.com/tickets