Time to mind our language 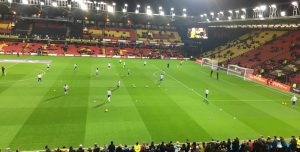 I heard a new chant from the Chelsea fans at Watford, directed at a fellow journalist who regularly tweets against racism in football. Not being one of the Twitterati myself, I wasn’t aware of this social media spat… but it’s unusual for a hack in the press box to be targeted with a specific chant

I heard a new chant from the Chelsea fans at Watford, directed at a fellow journalist who regularly tweets against racism in football.

Not being one of the Twitterati myself, I wasn’t aware of this social media spat… but it’s unusual for a hack in the press box to be targeted with a specific chant and very pointed abuse.

The reporter’s crime, at a time of heightened sensitivity at Stamford Bridge about offensive language, has been to call it out.

It centres on the use of the y-word to refer to Spurs fans, though it applies equally to the racist words directed at Raheem Sterling by a few people in the Matthew Harding stand at the recent game against Man City.

In a way it’s a complex issue as Spurs fans appropriated the y-word themselves, to neutralise its force. Yet it’s also a very simple issue. The fact that others use offensive words doesn’t in itself make it automatically acceptable.

If we can all now accept that the n-word is inappropriate, and we can agree that anyone identified chanting it can expect to be slung out of a football ground, then it follows that language is capable of change and people need to change their language, if only to avoid arrest… never mind for reasons of decency, humanity and morality.

Chants develop. Leeds, Liverpool and Manchester United fans were locked, for decades, in a spiral of trying to out-hate each other with the venom of stadium songs aimed at goading rivals about each team’s tragedies.

The most notorious were the chants ‘celebrating’ deaths at the Hillsborough disaster and the Munich air disaster, each set to a jolly, disarmingly gleeful tune.

Chelsea FC, as a club, could do more to actively snuff out this problem. Quite apart from the morality of it all, it could eventually lead the club (ironically owned by a Jewish oligarch) to be fined, banned and otherwise restricted – hampering the on-field success that fans crave.

Chelsea have urged fans to stop singing an Alvaro Morata song which rhymes the y-word with ‘He came from Real Madrid’. That may not be a great example, as – these days – the chances of Blues fans singing anything much in support of the confidence-shorn striker seem remote, but it shows that the club (and the player himself, incidentally) are prepared to start taking action.

At the start of every match at Stamford Bridge, the ‘Let’s Kick Out Racism’ logo appears on the giant screens, with an announcement that racist language will not be tolerated.

Unfortunately, having heard the same message so often, regulars are now immune to this repeated decree, just as frequent flyers doze through pre-flight safety announcements.

It’s also unfortunate as it sounds, every time, like a brand new policy change, rather than reaffirming an existing regime of not tolerating racist jibes.

Spurs fans shouldn’t have had to ‘reappropriate’ the y-word to neutralise it.

All language changes and evolves. Words that once had the power to harm have dropped out of common use. New, fresh, raw venomous words and phrases are adopted to replace the blunt ones.

So should all terrace chants be acceptable for teatime family audiences? It’s a tricky one. Swearing, including the f-word, is now heard everywhere, and reining in swearing would seem to be an impossible task.

But the pendulum keeps swinging, and words which were once in regular use fall out of favour. Methinks.

The FA believes the y-word is wrong. Individual clubs do. Official Jewish representative groups do. The argument would appear to be at an end.

What may have been reluctantly tolerated in one age is no longer acceptable, just as the n-word is outlawed.

It is, by the way, just as unacceptable for Chelsea fans to be dubbed ‘rent boys’ by rival fans – a clear homophobic slur, quite apart from being as ludicrous as alleging that every Spurs fan is off to the synogogue.

Yet when opposition supporters chant ‘rent boys, rent boys’ at Chelsea, police officers do not wade in to make arrests.

Eventually they will, and all unacceptable jibes will be acted on. The technology is evolving too, and pinpointing offenders while gathering evidence that will stand up in court should eventually erase racism and criminal abuse.

Already, Chelsea FC is thought to be planting ‘spotters’ among ordinary fans, to help identify culprits and speed arrests and ground bans.

Racist, obscene or illegal chanting undermines the supposed ‘family’ side of attending sport. I remember, as a six or seven-year-old taken to Stamford Bridge by my father, that he would cough loudly when any chant reached the f-word, to protect my delicate ears.

I quickly learnt not to ask: “Daddy, what are they singing?”

You really notice the difference when attending matches at Kingsmeadow, the home of Chelsea Women. There is only supportive chanting, and any stray negative or borderline unacceptable songs just sound plain wrong, and out of place. Some day, that enlightened attitude will prevail in the men’s game too.

In the 1970s and 80s Chelsea fans used to goad Leicester fans by singing songs disparaging that city’s multi-racial profile. That would now result in arrests; it is simply deemed unacceptable, criminally unacceptable.

If that battle can – and has – been won, the y-word war can, and will, be won too. The last cavemen to sing it, loudly and publicly, will be singing it in the van on the way to the custody suite.

One generation’s slang or banter is another generation’s insult. Being tuned in to the nuances of what is acceptable or unacceptable is a sign of being aware and respectful of others, and of being civilised.

Free speech requires self-policing, and needs to begin with a tolerant, respectful attitude to fellow human beings. Chanting abuse at journalists for standing up against racism and religious hatred undermines the positive change that is needed to bring any remaining time-lagged supporters up to date with what is acceptable in today’s world.