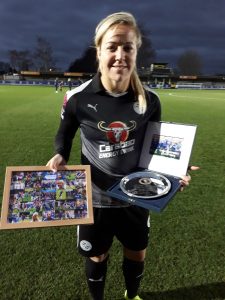 ‘I had a great time here, a really special time in my career’

As Gemma Davison prepares for a second return to her old club in a month, with Reading taking on Chelsea Women in the Conti Cup on Wednesday night, her affection for the Blues fans is clear, writes Jane Grove.

“Do you know what, it’s nice to be back because I love the fans, and the reception I got was really, really nice; it’s something that will stay with me forever,” she said after the Royals’ 1-0 defeat by Chelsea Women early in December, thanks to a Ji So-Yun goal early in the second half.

Blues fans made a presentation to Gemma before the game, in recognition of the four years she spent at the club, with a silver plate and framed photo montage now taking pride of place in her flat. “It was really nice; I appreciated it. It was very nice of them; I’m really thankful for that,” she said.

The well-travelled player, who began as a 14-year-old with Arsenal Ladies youth team and later had stints playing in the United States before short spells with Arsenal and Liverpool ahead of her Chelsea years, keeps up with her old team-mates at Kingsmeadow.

“I keep in touch with everyone here – Karen Carney, Fran Kirby, Hannah [Blundell], Drew [Spence] – everyone really,” said the 31-year-old. “I’ve played with them for quite a while, we’ve made a lot of history together and won some trophies. I’ll never forget those times; those times don’t finish when you leave places… you make friends for life.

“I had a great time here, a really special time in my career. It’s really nice to be back because I’ve always felt loved by the fans. I was really looking forward to it because there’s always a great atmosphere here and the fans are passionate about the club and it’s nice to kind-of get the appreciation from the time I was here.”

Despite narrowly losing to Chelsea Women in early December, Gemma believes Reading gave the Blues a good game. “Coming out for the second half we were a little bit slow, but credit to Chelsea; they played really well. Millie Bright was tight on me – and that’s Millie. She does that really well; it’s an automatic with Millie and it’s why she’s where she is at the moment, and one of the best defenders in the country.”

Gemma is enjoying a new role at Reading, playing more centrally than her winger position for the Blues. “I’m enjoying it,” she said. “I feel like I’m having success and learning new things. I’m always a player who wants to build layers to my game, and I’m enjoying doing something different.”

Now playing some of the best football of her life, Gemma has attracted fresh interest from the England managers, and doesn’t rule out an addition to her 16 caps. “The door’s always open for me to play for England, and if it happens it happens,” she said.

Emma Hayes is expected to rotate the squad following Sunday’s 3-0 league victory over Everton. Having such a large squad means there is plenty of scope to bring in fresh legs. Indeed, Chelsea are the only WSL team to use more than 20 different players this season.

Hannah Blundell, who was among the goal scorers on Sunday, reckons it will be a tight game. “Obviously we’ve played Reading recently, and got the 1-0 result. Possibly it’s a help that we’ve played them recently, but it’s a help to them as well. In cup games, anything can happen.”

From the manager’s perspective, Hayes is pleased with the way her girls have avoided overindulging on mince pies over the festive break. “Everyone’s kept themselves in good shape over Christmas; we’ve got competition for places and we’ve got a cup to compete for on Wednesday night,” she said, ahead of the quarter-final.

She knows that the most realistic chances of silverware for Chelsea this season are the cups, with Arsenal still well ahead in the league. “I’ve been in Arsenal’s position, so I know what it’s like to lead [the table], and I know the expectations when you’re in the driving seat, and I’m sure that they’re aware of that too,” she said. “For us, the chances of us winning the league and qualifying for the Champions League are minuscule so the pressure isn’t on us. As long as we keep improving the performances for us, the concentration for us is the cup competitions. All I can do is make sure the team is at their best until the end. The title’s Arsenal’s to lose, and all we can do is get in the way of that. So unless there’s a miracle…!”