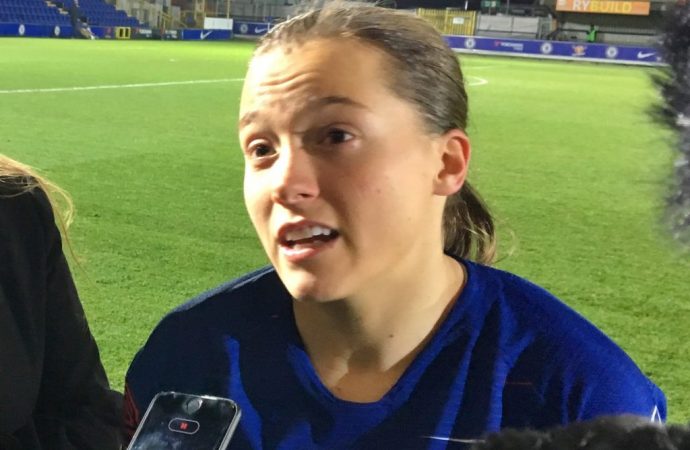 Although it was yet another clean sheet that most satisfied manager Emma Hayes, it was Chelsea Women's goals - and notably Fran Kirby's return to scoring ways - that brought most warmth to the 973 hardy fans braving freezing temperatures at Kingsmeadow as the Blues pushed Reading aside in the quarter-final of the Conti Cup.

Although it was yet another clean sheet that most satisfied manager Emma Hayes, it was Chelsea Women’s goals – and notably Fran Kirby’s return to scoring ways – that brought most warmth to the 973 hardy fans braving freezing temperatures at Kingsmeadow as the Blues pushed Reading aside in the quarter-final of the Conti Cup.

Kirby’s brace, and goals for Ali Riley and Anita Asante (her first for the club), mean the Blues are in the draw for the semis of the competition, with names pulled out of the hat just before the men take on Newcastle at the Bridge on Saturday.

It wasn’t all plain sailing. The Royals turned on the style in the second half, forcing keeper Carly Telford to make a few pressured punches clear, but Chelsea never lost command of the game, despite Hayes making a string of changes and, as predicted, rotating her squad to give playing time to as many as possible.

With Erin Cuthbert, Kirby and Beth England leading the line, Reading were caught cold in the third minute as Kirby was seemingly given all the time in the world to control, steady and shoot for the Blues’ opener.

That galvanised Reading, who tightened their defending and kept out all attacks until the 38th minute when Asante ran through and struck the ball beyond Irish keeper Grace Moloney. It flew into the back of the net off the post.

Remi Allen was posing the biggest threat for Reading, darting around the Chelsea area, but never really testing Telford.

In the 67th minute, Beth England appeared to be shoved and tripped in the area, but ref Abigail Marriott waved aside what seemed to be good appeals for a penalty.

The substitution of Ji So-Yun for Cuthbert with nine minutes remaining gave the Blues fresh impetus, and it was Ji who teed up Kirby to rifle home her second – Chelsea’s third – close to the end of normal time.

In the first minute of three added to the second half, Riley slid home goal number four, adding to the goal she scored away at Spurs last month.

“Obviously I wish I had one more,” said Kirby afterwards, with a smile. She said she was delighted to be back in the team and scoring again, with the England warm-weather break in Qatar looming next week. It has been a hamstring niggle that has kept her out of the team for several weeks, but she has patiently nursed herself back to full fitness, and it’s paying off for the Blues.