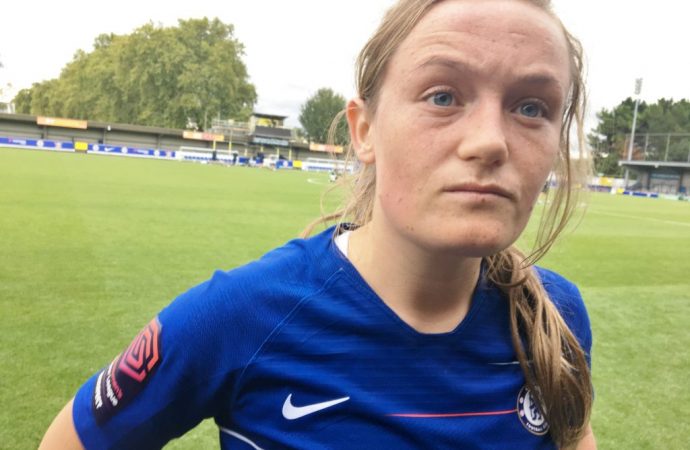 Chelsea Women are keeping up the pressure in the WSL, gaining revenge on Arsenal by beating them 2-1 away. Two goals from Erin Cuthbert were enough for victory at Meadow Park, although a late reply from Gunners top scorer Vivianne Miedema meant a nervy final few moments. Halfway through the first half, Cuthbert leapt to

Chelsea Women are keeping up the pressure in the WSL, gaining revenge on Arsenal by beating them 2-1 away.

Halfway through the first half, Cuthbert leapt to head home a Hannah Blundell cross for the opener, followed by a volley shortly after the hour mark for No2.

The Blues are now two points behind Arsenal, although the Gunners have a game in hand.

Meanwhile, the Conti Cup draw gives Chelsea home advantage over Man City in the semi-finals, with the match to be played in the first week of February.

Chelsea’s England players are now packing their bags to fly to Qatar for a warm weather training camp, but action resumes on Sunday January 27 at 2pm at Kingsmeadow for the visit of Birmingham City in the league.

In intriguing comments about her relationship with England (where she was linked with the manager’s job before Phil Neville’s appointment), Chelsea gaffer Emma Hayes said that the recent resting of Fran Kirby had been partly done to protect the Blues striker’s international prospects.

“Fran had a little [hamstring] tightness and needed to develop the strength around it – she’s got a World Cup coming up,” she said. “We made a collective decision with England, to protect [her]. I have a responsibility to England. I want to have a responsibility; I’m English. I want our country to win the World Cup. Our game benefits from it, and if I can do anything to help Phil Neville [win the World Cup], I will.”

Hayes added: “This is the best squad I’ve ever worked with. I believe we’re one of the the best squads in Europe, if not THE best squad in Europe. We’re in the top five [in Europe], and the time I’ve been here we’ve got progressively better. Our clean sheet record is absolutely phenomenal.”