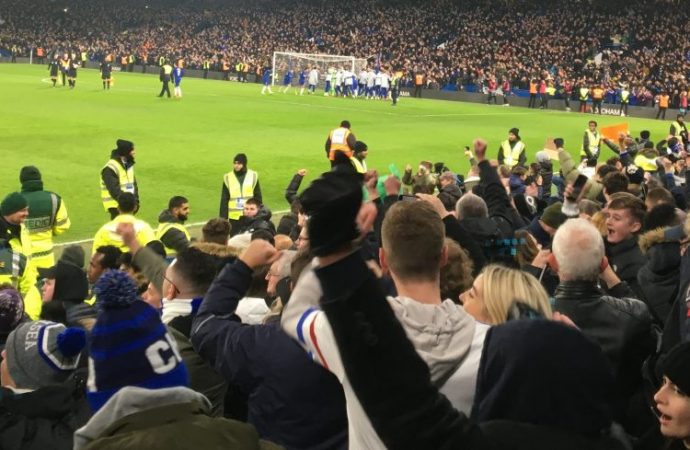 Joyous scenes at the end of the second leg of this year’s League Cup final after Chelsea kept their heads to beat Spurs on penalties to play Manchester City in the final at Wembley. Against the intimidating backdrop of the baying hordes in the Matthew Harding stand at Stamford Bridge, Eric Dier sent his effort

Joyous scenes at the end of the second leg of this year’s League Cup final after Chelsea kept their heads to beat Spurs on penalties to play Manchester City in the final at Wembley.

Against the intimidating backdrop of the baying hordes in the Matthew Harding stand at Stamford Bridge, Eric Dier sent his effort rocketing towards row Z, while sub Lucas Moura’s hesitant attempt was easily saved by Kepa, cueing a squad sprint across the pitch to mob the keeper.

As Kepa was buried beneath a gaggle of delighted team-mates, fans went home singing and grinning… but still asking themselves why the night’s overall performance – particularly the intense first half – had not been replicated in the lacklustre first leg of this Carabao Cup semi at Spurs’ temporary home a fortnight ago.

This was a completely different Chelsea, seemingly responding to Morrie Sarri’s exasperated comments after the recent poor showing against Arsenal that he couldn’t motivate his squad.

The energy levels were such that had the Blues chosen to start each match this way this season, they’d be ahead of Liverpool and City in the league table.

Everyone was focused, everyone was going in for full-blooded tackles, the flicks and passes were crisp and quick, and the only surprise at half-time was the Chelsea were merely 2-0 up on the night and not 3-0 or 4-0 ahead.

So, naturally, the intensity dropped in the second half, Tottenham got a goal back (levelling the tie on aggregate) and it went to a shoot-out.

Even defender David Luiz was showing signs of life after a dreadful display at Wembley in the first leg. Chelsea were ahead on the night – and level on aggregate – after 27 minutes, with N’Golo Kante firing Eden Hazard’s poorly cleared corner back into the mix and watching it fly through Paulo Gazzaniga’s legs.

After Ben Davies went off injured, to be replaced by Danny Rose, six minutes later, the Blues clearly believed they had the upper hand, and continued to attack. In the 38th minute it was 2-0. Ross Barkley was fouled in his own half, but got up and took the free kick before Spurs had gathered their thoughts.

The ball reached captain Cesar Azpilicueta, who was wearing out a furrow getting forward down the right wing, and he centred for Eden Hazard to stroke home.

The first half ended with a penalty shout from Hazard, but when ref Martin Atkinson waved it away, no one was too bothered… after all, the Blues were completely in charge.

But Spurs revived in the second half, clawing a scruffy goal back after 50 minutes when Rose crossed for Fernando Llorente – otherwise anonymous – to bundle home.

It all got fractious, with Jorginho, Kante and even manager Sarri shown yellow cards in a three-minute burst of mayhem, but it stayed 2-1 (2-2 agg) until the end.

Willian, Azpilicueta, Jorginho and Luiz all converted their penalties coolly, but only Christian Eriksen and Erik Lamela were on target for Spurs, with Dier and Moura failing to score.

It’ll be Chelsea’s 15th final in 16 years, underlining just how impressive the Roman Abramovich years have been.

But with Kane, Alli and Son away, Spurs will feel a lot of their edge was missing on the night of this semi.

The final takes place at Wembley on Sunday February 24 at 4.30pm.