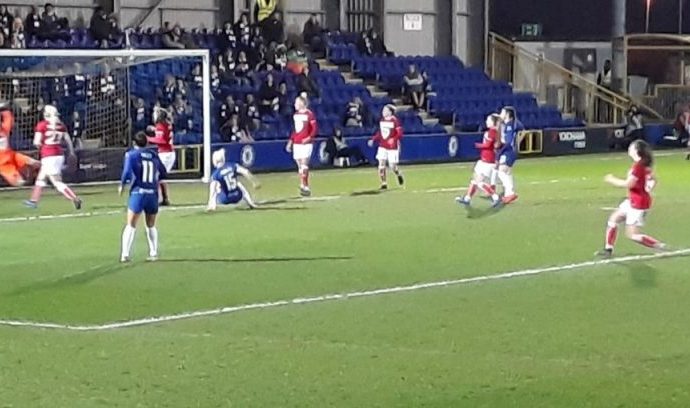 In a performance which was as complete as it was awe-inspiring, poor Bristol City were thumped 6-0 by Chelsea Women, with both Fran Kirby and Beth England leaving Kingsmeadow with match balls. Two hat-tricks, some exquisite build-up play, dazzling crosses by the super wee Scot Erin Cuthbert – a girl powered by Duracells – and

In a performance which was as complete as it was awe-inspiring, poor Bristol City were thumped 6-0 by Chelsea Women, with both Fran Kirby and Beth England leaving Kingsmeadow with match balls.

Two hat-tricks, some exquisite build-up play, dazzling crosses by the super wee Scot Erin Cuthbert – a girl powered by Duracells – and a comfortable clean sheet to boot… no wonder manager Emma Hayes was tucking into her Galaxy bar at the end.

This was a half-term treat for the young Kingsmeadow crowd, many of whom were first-timers attracted by free Chelsea scarves and the active participation of mascots Stamford and Bridget, who took part in a hilarious half-time penalty shoot-out where even four-year-olds were effortlessly netting goals past them.

“Do Chelsea always win 6-0?” one youngster was heard asking, as a family group made their way home.

They would, if Hayes had anything to do with it. She revealed after the final whistle that she had given her players a good talking to at half-time because she felt they had gone into cruise control after two early goals, and had lost their hunger and rhythm.

“Play the game plan… win the game!” she said, repeating her often-chanted post-match mantra about putting into practice all the hard work that goes on in training. “We’ve been building this momentum for a while. I said that there’d come a point when one team would come here and get a hiding, and we’d be clinical, and I think it could have been more than six.”

Although Bristol City kicked off, the Blues were 1-0 up in one minute and 40 seconds. Cuthbert powered forward down the right flank and delivered the perfect cross for Kirby to convert. Barely four minutes later it was 2-0, in almost identical fashion. Cuthbert crossed from the right, and this time England was on hand to flick the ball past Sophie Baggaley.

It took until the 34th minute for the third goal – the pick of the evening – to fly home. Kirby approached from the left, checked briefly and seemed to have lost her momentum… but then unleashed an unstoppable strike which sailed into the net at the Chemflow end.

The one-way traffic continued in the second half with Ramona Bachmann firing in a delightful cross with the outside of her boot, teeing up England, who forced her way through the challenges of two opponents in the box to welly in Chelsea’s fourth.

When sub Adelina Engman was pulled down in the box (meriting a yellow from ref Tom Bishop, when a red was probably the correct call) Kirby stepped up and buried the penalty into the corner, emulating ambassador and former captain Katie Chapman’s half-time instructions to the youngsters who faced Stamford and Bridget between the sticks!

There was still time for that rare thing a double hat-trick as, in the penultimate minute, sub Jess Carter sent over a magnificent cross from the right to give England a flying header and the Blues’ sixth goal of the night.

“I’m happy for both the hat-trick players; they complemented each other well and caused problems all evening,” added Hayes. “But I thought we were sloppy in the first half, defensively; going 2-0 up so early meant it was comfortable, but we became sloppy and I wasn’t happy and I told them that at half-time. We have standards and it’s important we respect that. You have to still do the fundamentals well enough, respect the opponent, respect the game… and we did that better in the second half. The subs came into the game, and they all contributed.”

Hayes said she was blessed with a wealth of good players – a squad which now looks forward to a double-header in the Women’s Champions League against Paris St Germain with renewed confidence and belief… even in the absence of talisman central defender Millie Bright, who watched from the stand.

Bright is nursing a long-term ankle issue which – she hopes – will not keep her out of Phil Neville’s squad for the World Cup in France.

Hayes is working closely with the England coaching team, and Neville in particular – with whom she enjoys a close bond, to pace Bright’s recovery and not needlessly risk aggravating an ankle problem by having her pound up and down the hard pitch of Kingsmeadow on occasions when rest is the best option. “She could keep playing,” emphasised Hayes. “But it’s the right decision, a collective decision between Phil and I, to preserve Millie throughout the season. Don’t take unnecessary risks!”

Bright acknowledged the enthusiastic support of the knot of committed singers nicknamed The Galaxy Crew because they (like Hayes after matches) enjoy squares of chocolate every time the Blues score. “Always look on the Bright side of life,” they chanted, as she waved back to them. “She’s here, she’s there, she’s got a lot of hair, Millie Bright, Millie Bright…” was another.